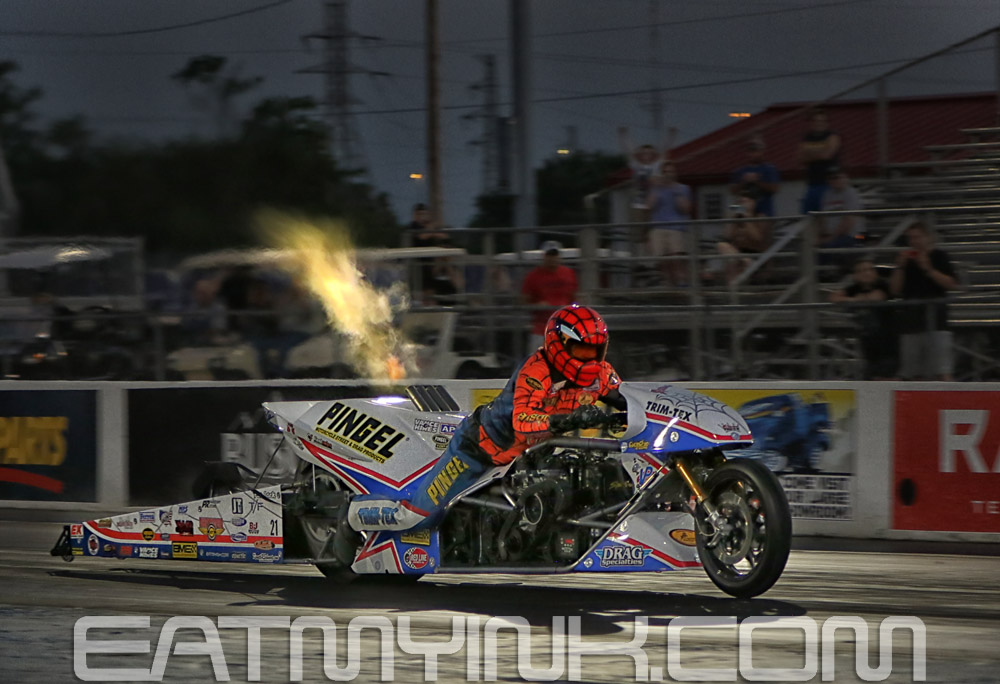 Contrary to the media-created drama you may have seen elsewhere, the Summit Racing Equipment Mid-West Drag Racing Series event at World Wide Technology Raceway (AKA Gateway) had all the warm, friendly atmosphere of a Pingel Top Fuel Motorcycle family reunion.

It had been over two years since Larry “Spiderman” McBride’s last race in actual competition, and the same length of time since I had been able to photograph these stunning machines and their charismatic pilots. And to hang out with this great, over-achieving community of people.

The rain-delayed Memphis final between Wills and Conner was run in the final qualifying round. Conner took a substantial advantage at the tree but smoked the tire at about 100 feet and dropped a hole. As Wills sped to the finishline, Conners pushed himself up to an upright seating position and put his hands on his hips, at speed—a signature Conner expression of competitive disgust.

So Wills came into eliminations with a win while McBride had the earned bye, which he used to run a spinning 4.231 at 133.65. Sam drove around Fenwick, Brown likewise ran around Conner, and Vantine beat Hand as both bikes struggled to stay straight.

Wills broke after leaving the starting line against McBride in E2, while Larry slowed to a 5.598 at 125.60. The Vantine/Brown match-up was awesome, with Vantine pedaling in his lane while Brown smoked his motor through the traps for the win.

Here’s video of that final: 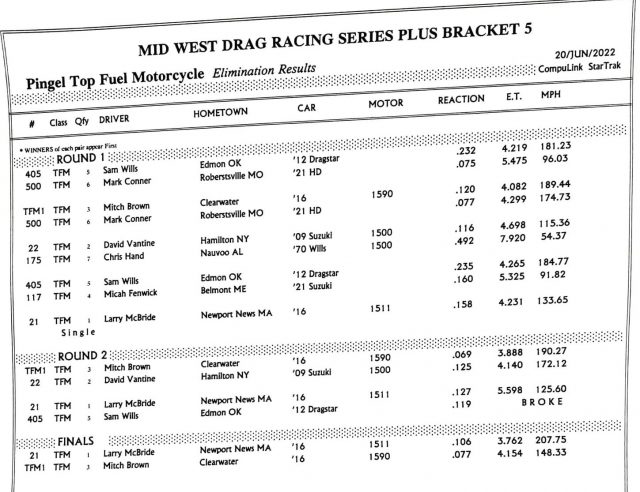 Immediately following the Top Fuel final, Gateway stud Shooter Willis took the bracket bike win. You can see that race also in the video above.

It was a dominant weekend for Sean Bellemeur and the “Killer Bs” Top Alcohol Funny Car team owned by Tony Bartone and led by tuner Steve Boggs. The California driver qualified No. 1 and raced to his third win of the season.

“Winning St. Louis was special,” Bellemeur said. “Everybody felt a little closer to one another after the [Ronnie Hobbs] incident in Great Bend. It was nice to be back with everybody. One way to grieve and heal is to do it together. Being with the whole Mid-West family was neat. The weekend had a different feel. It was more about the people than the racing.”

“It was definitely a crew chief’s race,” Bellemeur said. “Friday, a storm came through and ripped our awning off our trailer. It was hot and nasty and Boggs put it in the No. 1 spot. We came out on Saturday and the water grains went away and the temperature came down – completely different conditions. Throw your Friday tuneup in the trash can. He goes out and runs really well and runs low E.T. and top speed. It was a typical deal. The team did their thing and the Killer Bs were at it again. I just tried to do my part.”

“I’ve been beating on Jim to get in a Funny Car for years,” Bellemeur said. “I’ve known Jim for a long, long time. I always told him, ‘Jim, you’re going to love the Funny Car because you can drive the heck out of it.’ He’s a hot rodder, a car guy. I knew he’d love it when he got into it. Revving it up and staging it up against a guy like Jim Whiteley in the final was awesome. He whipped my butt off the line. I was late and he almost made me pay for it. He’s driven a lot of different things out there. He’s going to be really, really successful in that Funny Car.”

On Whiteley’s way to his first TAFC final, he ran a 3.682 at 210.47 on a first-round single, where he was supposed to race Chris Marshall. He then paired up with Annie for a husband-wife semifinal match, which he won on a holeshot with a 3.679 to Annie’s 3.668.

Bellemeur praised officials from the MWDRS and World Wide Technology Raceway for providing a solid track surface despite the challenging summer conditions.

“Jimmy Boles with the Mid-West Series prepared that track so unbelievably good,” Bellemeur said. “It was crazy. When we went out there Friday earlier in the day and we were taking a look at the track, we were a little concerned. He made lemonade out of lemons. That track ended up really, really good. The World Wide staff were great in getting everything ready for us. I’m looking forward to going back.”

After missing the Great Bend race for a major tractor pulling event, Stan Shelton returned to the series seeking his second Pro Mod victory in his screw-blown Culp Lumber ’67 Mustang. He beat the heat and outlasted a strong field of competitors, ultimately taking the win over Aaron Wells, the 2019 MWDRS champion. Wells hurt an engine in the semifinals and wasn’t able to fix it in time for the final round, so Shelton staged and took the tree for the win.

“The heat is difficult for all tuners, and we really hadn’t run that car in any heat,” Shelton said. “Actually, at our last race in Tulsa, we went out first round because the track temp was pretty high and the car spun on us a little there and didn’t get down the track real good. So that was a challenge. It felt good to overcome that obstacle a little bit. We were excited that [tuner] Steve Petty did an awesome job of ‘baking the cake’ to get us down the track. That’s what matters. That’s part of this game. I think the track temp was better than 130-135 degrees, so it was very challenging for him and the track crew to where we could get these Pro Mods down the track.”

“When the track’s like that and the car wants to wash out around 150 feet, you’re not really relaxed in the seat because you’re waiting on her to turn sideways on you,” Shelton said. “I think everybody had a lot of apprehension. Then when the cooler conditions came in at night, everybody relaxed a little bit and settled in. It helped me to get back on track, especially since I’m going to be doing a little [NHRA] quarter-mile racing at Norwalk next weekend.”

Wells, who qualified No. 4 in his screw-blown ’67 Mustang GT500, opened eliminations with a 5.484 win on a single. Opponent Tommy Cunningham sat out the round due to a medical concern with his father and crew chief, Larry, who was released from the hospital Sunday. Wells then used a 3.709 to beat Josh Vettel, who broke after the starting line. In the semis, Wells stepped up when it counted, firing off a 3.699 to beat low qualifier Daniel Pharris and his 3.743.

Shelton’s second event win gave him a nice boost in the points standings, though after missing the Great Bend race, he’s cautiously optimistic about his championship chase.

“We’re going to certainly keep digging,” Shelton said. “We have plans to make the rest of the races. We don’t have any conflicts. That’s the beauty of the Mid-West Series – they’re off during the summer when our pulling season picks up. We’ll pick them back up in September in Michigan. Hopefully we can overcome missing an event. If we can keep doing real well and having good results, it might be a possibility that we can make a run for it. Dustin Nesloney is doing a fantastic job holding on to his points lead, so we’ll just have to see what we can do.”

Finally, Shelton also acknowledged the efforts of the track crew to overcome the heat.

“I want to give a shoutout to the Mid-West crew and Jimmy [Boles],” said Shelton, who also thanked Petty, Proline Racing, and his family and employees at Culp Lumber. “They had a very challenging weekend with the heat. These cars are making a tremendous amount of horsepower. It’s one thing for us as drivers and our tuners to get us down the track, but they did a good job of overcoming a tremendous issue with the heat so we could give a good show.”

With entries ranging from California to Georgia, the Front-Engine Top Fuel class saw 15 dragsters hit the track in qualifying. Going into eliminations, race officials opted to run a Chicago-style format, with two rounds of racing and the two quickest drivers from those two rounds returning for the final round. The final round featured Shawn Bowen and Jim Murphy, who both ran 3.93 in qualifying. Bowen in his “Violator” dragster stepped up to a 3.81 at 198 to take down Murphy’s 3.86 at 207 in his California-based entry.

It was Illinois versus Missouri in the Top Dragster final round, where Al Peavler in his Olney, Illinois-based ’13 American dragster paired up against Jason McKague from Ballwin, Missouri. Peavler had the starting line advantage with a .006 reaction time and followed through with a 3.892 on a 3.86 dial-in to knock out McKague, who broke out with a 4.629 on his 4.64 dial-in in his ’18 Racecraft dragster.

Two of the most evenly matched Top Sportsman entries faced off in the final round, as Rashville, Missouri’s Rod Moore defeated Iowa’s Michael Chitty. The race was over at the starting line when Chitty went .003 red in his ’04 Chevy Cavalier, giving up his 4.315 on a 4.30 dial-in. Moore slowed to a 4.572 from his 4.48 dial-in in his ’01 Chevy S-10 pickup truck to take the win.

Local racer Brent Wagner was victorious in Pro Jr. Dragster after qualifying fifth in his Arnold, Missouri-based dragster. He overcame Emma Wyman’s starting line advantage, using a 7.92 to beat Wyman’s 7.933, both on a 7.90 index.

MWDRS racers will have nearly three months off for the hot summer period before returning for the final three races of the eight-race season, beginning with the U.S. 131 Nationals, Sept. 9-10, at U.S. 131 Motorsports Park in Martin, Michigan.

story by Tim Hailey and MWDRS, photos by Hailey