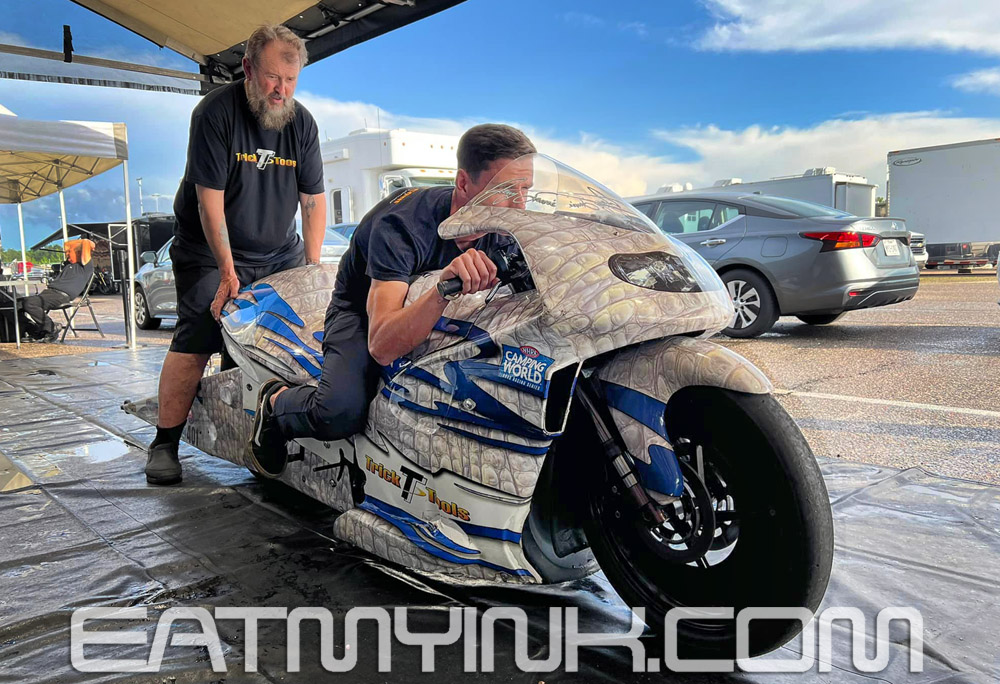 Readers who can put 2 and 2 together probably figured out that the White Alligator Racing’s Trick-Tools sponsorship announced exclusively here on Eatmyink during the Gatornationals included some sort of opportunity for 4.60 rider Chase Van Sant, whose dad Bruce owns Trick-Tools. At least one of those opportunities was realized last week when Chase completed the first phase of his NHRA Pro Stock Motorcycle licensing on Jerry Savoie’s WAR Suzuki at Virginia Motorsports Park following the national event there.

“Everybody’s got a really heightened sense of awareness, I think, when somebody new is on the motorcycle,” noted WAR tuner/team manager Tim Kulungian. “There were a lot of people around Chase during his first time doing this, a lot of people stayed and tested. So Andrew (Hines) and Eddie (Krawiec) and Angelle (Sampey) and Chris Bostick were there, and Joey Gladstone and Cory Reed. I mean, just a lot of people in the sport that were there watching him. I can only imagine what it’s like throwing your leg over a Pro Stock bike for the first time, and there’s all these people here that do this every weekend and do it really well.”

If the audience made Chase nervous, he never showed it or spoke about it.

“He did a great job on his first burnout, which was a good indicator on how how well he understands the motorcycle, the clutch, and all that stuff. It’s not just a burnout, that’s for sure.

“And he rolled up and he did a great job staging the motorcycle and everything that happens in that process, from him lining up the bike, and the guy in front of him and me behind him. And that went really, really well. He put the bike on the two-step and launched it and shut it down at the 330.

“His first light was an .025, and that’s the first thing Drew (Hines) asked. Chase pops the clutch, and does whatever he does in the first run. Then we’re looking at the ticket, and Drew walked up behind us and asks ‘What’s his light?’ .025. He’s like, ‘Huh, pretty good.’

“And he was within .010 of that first light the whole test session. Just really consistent, so that was really good to see.”

Maybe Performing a Little TOO Well

But it seems that Chases’s 4.60 muscle memory was full on.

“Chase’s first run, he went to the eighth and shut it down,” said Kulungian. “So I told him ‘Go to 330, eighth mile and shut it down. And so the next one he goes well past the eighth, like through fifth gear, and shuts it down and coasts to a 7.40.

“Bruce asks ‘How are we doing on the protocol for NHRA?’ And all I can really do is give him a nervous but impressed grin.”

What the numbers didn’t show was Chase’s surprise at the immediacy of throwing a Pro Stock clutch lever.

“It’s crazy how different it can be,” Chase said. “The difference between a 1.08 60 foot on a 4.60 bike with a slider versus a Gen2 clutch on a Pro Stock bike doing the same thing, how hard it hits….Everyone says ‘You’d better be ready for that clutch lever.’ And I’m like ‘I’ve done some quick 60 foots. Can it really be that different?’ It is. I released the lever and about broke my neck. I started to do my normal ram-tuck deal, like I always do, but it just stood me up like I wasn’t ready for it.”

“I think he’s been as fast as 1.02 in the first 60 feet, but I think the main difference he said was how much harder this bike—this hand clutch—accelerates in the first five feet compared to a slider,” said Kulungian.

“With the slider, you’re taking a bike that’s stall speed is, whatever, 6000 rpm, and then you let the engine rev up and then it takes its time to apply plate load. I say it takes time, but it happens pretty quick.

“But there’s nothing like unleashing a certain amount of static spring pressure on a clutch pack. It’s now, it’s right now when you let go of the clutch lever when there’s spring behind it, it’s right now. So that’s the main difference.”

“Even after two runs, we did two more and I still didn’t feel 100% confident or comfortable,” said Chase. “It was still taking me that long to get prepared and get down into a tucked position. It’s a whole lot different, that’s for sure.”

Working with a New PSM Rider

Kulungian has never worked with a new PSM rider before, so he relied on his own experience as a newbie. “I went to George Bryce’s school when I was younger,” said Tim. “So my intention for this first test session was fundamentals, and if we get the fundamentals, we can build on that. First, let’s look at what you’ve taught yourself, and see how you do it. And then we’ll get all the fundamentals right. And then once you get the fundamentals right, you can kind of start saying, ‘Well, I really don’t like this one little thing that I do,’ or ‘I don’t like that one little thing that I do,’ and you can start picking up things.

“So for this first test session, I think it was really important that we just kind of nailed the fundamentals and how the motorcycle is going to respond to certain things. You know, when to take an aggressive move to the left or to the right, or when to use your footpegs to steer the motorcycle.

“I think that, at times with people coming into this sport, they can see a big transporter, and a lot of people around, a lot of people working on a bike, and it can be somewhat intimidating. So, what we talked about was this—’You do this a lot, you’re really good at it. And if you ride the motorcycle with the ability and confidence that you already intrinsically have, then you’ll have no problem doing this.’

“And, so let’s just go and try it one time and see what we get, and we’ll come back and we’ll look at what you did and decide if we want to change anything.

“We get back and we’re talking and so I’m like, ‘Alright, tell me a story.’ And he told me the story. He mentioned a few things that he’d like to change.

“He did so exceptionally well on his very first run. And the next one was really going to show us how well he can go from getting something from the parts and pieces of his run that he didn’t like him to getting something he liked. That’s really what it takes to go from good to great quickly. And I’m telling you, everything we talked about, he was able to do that. He was able to perform those actions, favorable actions, like in the very next run. So that was a huge step.”

“On a couple of runs the bike went right just a little bit, and he was able to pull it back to the left under power without making a really aggressive move with his body. That was really good that he was able to do that.

“On top of that, he’s got a good mindset. He’s good at picking apart some of the things that he doesn’t like. And so far, he’s been really good at correcting those things he doesn’t like. And he’s young, so that’s really working to his benefit. So I think we’re off to a good start, that’s for sure.

“Chase spent some time in Houston with us getting to know (WAR crewmen) Harvey (Deane) and Keith (Nichols), and I think that was valuable time. And so when he showed up here, he already kind of knew folks a little bit. At the Richmond race, we definitely got plenty of time to get to know each other with all the rain we had.”

Chase found it awkward to not be actively involved in prepping the bike. “It’s so weird for me. Keith pushes me back, I get off the bike and I’m ready to push it up under the tent, get it up in the air and do whatever I need to do. And Keith says ‘Grab your stuff and go inside, it’s alright. We’ve got this.’

“It’s so cool—Keith and Harvey and all the work they put in, and they’re really good people to be around. Karen and Jerry too. It’s a bummer that Jerry wasn’t around this weekend (he smashed his toe at the farm), but Karen is as sweet as they get. Any nerves I had, she helped put them to rest. The whole team is great to be around and helped out tremendously.”

So four passes were made in Richmond, none to the full quarter. Norwalk was supposed to be next opportunity to complete Van Sant’s licensing, but the track is currently not scheduled to hold their traditional Monday session following the national event.

“The way this deal is structured, we’re doing it Mondays during national events,” said Kulungian. “If there’s a time where WAR decides to go testing, then we’ll Chase the opportunity to ride a motorcycle there. But I want to do this on an on a racetrack that’s been prepared by NHRA.

“So our next objective is to just give him a little bit of seat time and let him make a full run. And hopefully, let the run slow down a little bit for him, and not be as busy and kind of know what’s coming next.

“He got a lot of accolades from our peers. Angelle signed off on, I think, all but his full passes. And Joey Gladstone signed off the same. So we had two drivers and a track guy there that signed off as well. So that was good.

“I think it’s also a great thing to get younger people involved in NHRA drag racing, and new people involved in Pro Stock Motorcycle. This is a super marketable kid, you know? Great personality, and I think he’d be a good deal for somebody.

“I’m excited for him, and we’re really grateful for the opportunity to do this together with Chase and his dad. I think he’s gonna do just fine.”