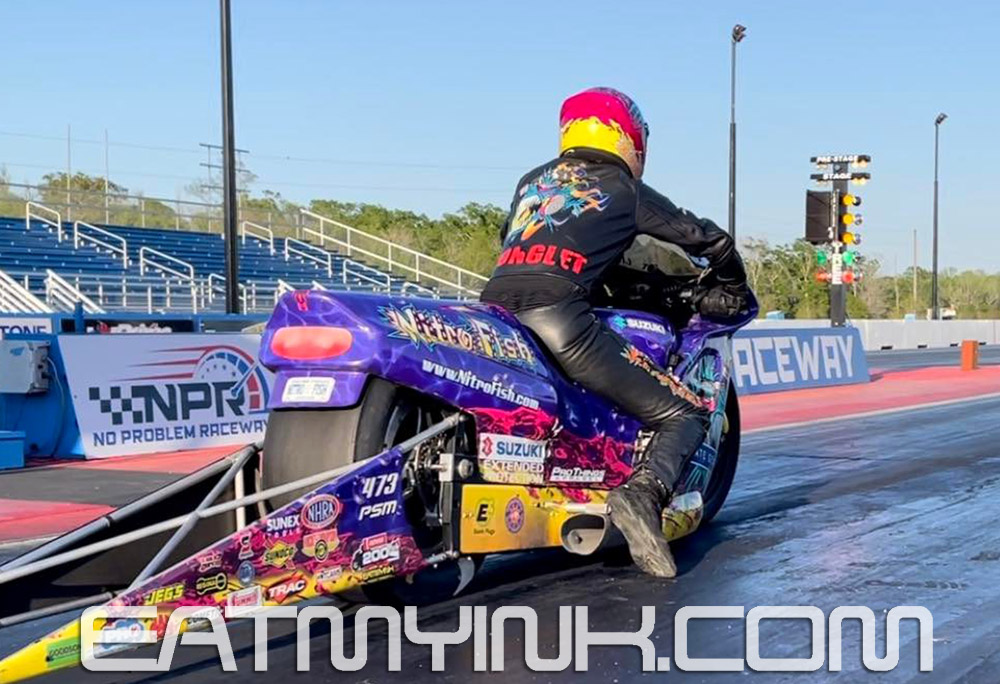 According to his brother GT, LE Tonglet will return to NHRA Pro Stock Motorcycle competition at the Houston Spring Nationals on April 22-24. Seen in the photo above, LE recently tested at Louisiana’s No Problem Raceway on the Tonglet’s own Nitrofish-sponsored, carbureted, 2 valve Suzuki, the combination he’ll be racing with—for now.

“We have a 4 valve ordered from Vance & Hines,” GT said in a phone call on Monday. He also indicated that they were setting up an arrangement for the bike to be brought to more races later in the season, as the Tonglet’s lives have become too busy for them to trailer around the country themselves these days.

Of course the big question is, has fireman LE stayed off the firehouse chili enough to make a competitive weight? “He’s getting there,” said GT, who reported that his younger brother was on the treadmill the last time he called.

“They called me asking me about my diet and how I lost so much weight,” said Dave Conforti of Worldwide Bearings.

“I dropped 20 pounds already!” said LE. “I’ll be at my fighting weight for sure.”

Tonglet’s last full season in 2018 was a great one, winning five races with White Alligator Racing. He won the championship in his rookie season, beating well-funded teams with his family operation in 2010. He has 20 points-paying wins and one Pro Bike Battle win.

Time to pad those numbers!