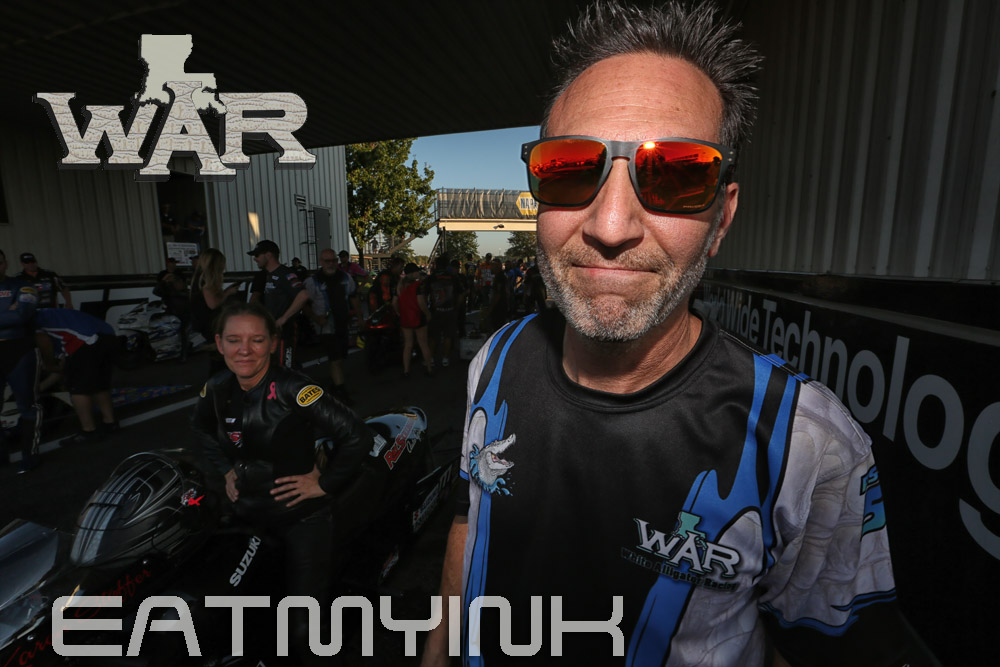 We previously covered the basics of what happened on raceday at the NHRA Gatornationals at Gainesville Raceway, now we go behind the scenes with White Alligator Racing tuner/manager Tim Kulungian and rider Karen Stoffer and discuss how her record-shattering runs in the 6.60s happened.

You generally don’t set records in drag racing without good 60 foot times, and Stoffer’s were exceptional 1.03s on her Big St. Charles/Skillman Auto Group, White Alligator Racing Suzuki TL. That’s an improvement over the still very good 1.05s and 1.04s the bike ran in the string of three straight final rounds that closed out her 2021 season.

“I think Chip Ellis had a 1.02,” Stoffer recalled when asked about the lowest she’s ever heard of.

“1.023,” Ellis said without having to think about it, and then produced unofficial testing figures as low as 1.0153—all on the the late, great, Junior Pippin’s Buell.

“And the more impressive thing is, I didn’t even know it. It’s not like the bike ripped out from underneath me or anything. I just didn’t even know that it was that good. It just felt so smooth.”

“I’ll take a 1.04 and a killer 330, rather than a 1.03 and a questionable 330,” said Kulungian. “When you start getting into the 60 foots that way, you’re accelerating the vehicle that quickly in 60 feet. What it comes down to is, how much horsepower do you make and how big is your tire, right? Now you have to move 620 pounds, and you’re only going to get X amount of traction at a given event. And so you do the best you can with the amount of traction you’re given. The venue, the racetrack and the temperature—all these things set certain limitations. We only have a tire that is so wide.

“So in these circumstances, these are like a lotto play. When it sticks, it’s going to go fast ’cause there’s a ton of bite. And when it starts to spin, it really lets go. There’s a small window there on cold racetracks (like at Gainesville this year), and that was one of the things that kind of drove us to our decision Saturday night.”

That was when—after an oildown from the second pair of the only round of qualifying after two days of rain—that the class voted to not complete the round.

Matt asked me ‘Do you want to run on this racetrack?’ And I said, ‘No, I don’t, not really. I don’t think it’s very safe.’ And he agreed. So we kind of both went to our competitors and said, ‘This is what we think.’ Some people were really opposed and others were for it.

“Obviously, my team, my teammates, backed me up and agreed to vote not to run.

“But the 1.03 60 foots, if you look at the numbers on Sunday, they came early in the day. I think our first run was around one o’clock, And the second run was around like 2:30. But after that, we went from that to run a 1.05 and 1.06. The track started cooling down and it was a much less forgiving racetrack. So once the tire breaks that bond—dude, that’s it.

“Rubber was coming off the track, it wasn’t as much coverage, the track was cooling off, they’re spraying at 100%—which gives us a bunch of surface tack, but there’s no depth to the bite. We’re backing off from E2 on, and it really wasn’t responding. I was planning to go 1.04 in the finals, and when it went 1.06—that’s two numbers off. That’s a big deal.

“And I really don’t feel like we did a good job in the back (half). When you start comparing numbers like Pomona—we went 200 in Pomona. On our meter, it was 3036 feet in Pomona in density altitude. On our meter in Gainesville we were negative 600 feet. You’re talking about a 3600 feet difference in the green, and we can’t go one mile an hour faster? This is kind of silly, right? This doesn’t make sense.

“And Karen, I think she just she did a great job all day.”

In the next installment of this series, we will focus more on what Stoffer had to say about the weekend.