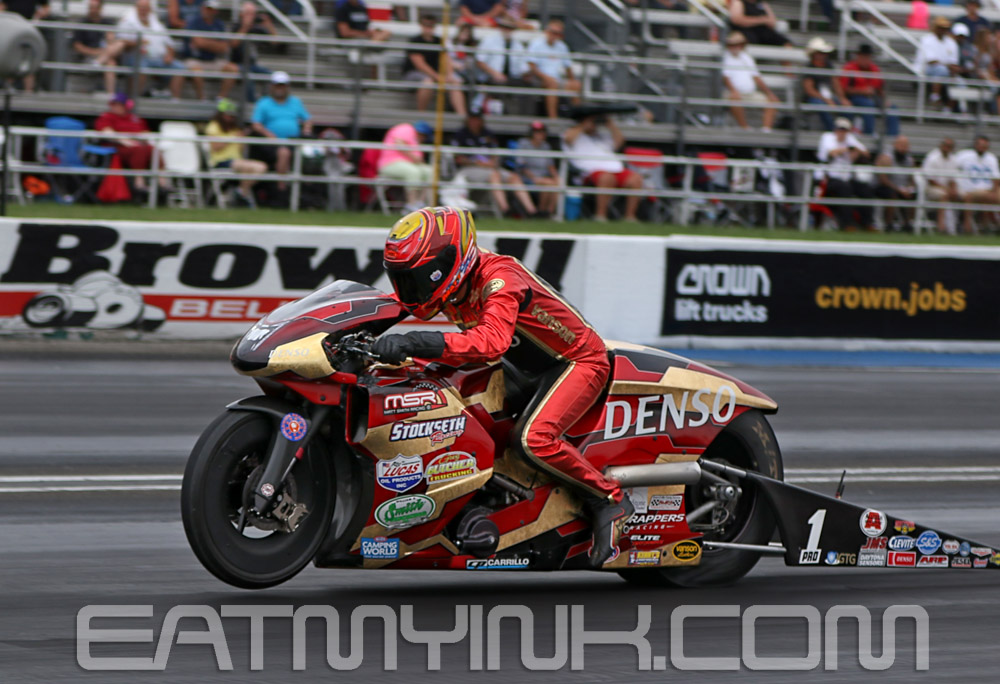 I’m not sure what there is to say about Matt Smith that hasn’t already been said. Matt could rewrite the NHRA record books if he races as long as his dad Rickie, and his achievements come as an owner/rider/builder/tuner against at least one huge operation with a daunting budget and large, talented staff. There aren’t many in this era of NHRA professional drag racing that can say the same.

It’s a testament to Matt’s relentless competitiveness that as he and I walked to the Lucas Oil Raceway Park media center for his winning press conference, all he wanted to talk about was his bad lights. He’d just won the NHRA U.S. Nationals and he said “I couldn’t cut a light to save my life all day. I don’t know what’s wrong.”

That’s Matt Smith—hard on himself and often hard on others. But he can do it all (except build chassis, as far as I know), and he’s a winner at all of it. We’re witnessing greatness here, people.

Competitors will criticize that Smith is manipulating NHRA rules to favor his V-Twins, but what does he care? He’s raced both his Buell and his Suzuki this season, and won on both. He sometimes rides both the same weekend, as he did in Indy.

In the staging lanes before Friday’s first qualifying session, Matt was complaining to Eddie Krawiec and Joey Gladstone that he couldn’t get the Suzuki to 60 foot. “Just switch clutches,” Eddie said matter-of-factly. And why not? Matt’s been known to switch clutches plenty, and as I understand it, his Buell and wife’s Angie’s Buell have different clutch systems.

Instead of switching clutches, after posting 15th best time in Q1, Matt switched bikes to the Buell. Here’s links to Q1 order and notes.

Before you whine about switching brands during a race weekend, consider that Matt has earned the ability to do that. After making an enormous investment in Buell motors and chassis over a decade, Matt secured backing from Mike Salinas’ Scrappers team to fund a Suzuki program. That’s Grade A Hustle right there.

And the right choice, as Smith’s Red Rocket Buell rocketed to second in Q2, where he stayed behind eventual number 1 qualifier Angelle Sampey.

Defending 5X NHRA PSM champ Smith had an easy one in round 1 on raceday. With his MSR teammate Scotty Pollacheck in my near lane, I knew I was going to have a clear side shot of Matt’s bike one way or another. Either Scotty was going to give Matt the break or luridly redlight. Turned out to be plan A with a .627 reaction time while Matt advanced. That .627 was so whack that the NHRA website doesn’t list anything at all for Scotty for the round, as if he’d broke in the waterbox. Like getting your record expunged down at the courthouse. But it’s all good, Scotty was doing his job and there was never any doubt that it was going to happen one way or another.

Not that Angelle’s .220 was that much better, sending MSR customer Ron “RAT” Tornow and his sharp .016 into the next round. It was a great round for Smith’s team. Angie advanced past Ryan Oehler and Jianna Evaristo flat-out earned her win over Krawiec—taking the tree slightly and laying down a clean, straight lap. She credited Matt’s coaching. Oh yeah, add “rider coach” to Matt’s resumé.

Kelly Clontz didn’t win her round 1 against Steve Johnson, but she put .053 on him at the tree and—like Jianna—put down a good, clean lap that was a credit to her riding and husband Chris’ tuning. Here’s an interview with the Clontz’s:

Some have had trouble with audio on my Indy videos. If you’re having trouble, email me.

Arana’s next round opponent was Matt, and Hector redlit. Evaristo also redlit, by a slim -.006, against Savoie. Angie beat Johnson, and Stoffer beat Tornow.

Savoie was the next victim of the Red Rocket, while his WAR teammate Stoffer beat Johnson in the other semi.

Just like he said as he was beating himself up on the way to the press conference, Matt had some shitty lights—especially his .081 in the final. Stoffer’s .033 put her way out front. Both bikes fought to stay in the groove, as Matt will tell you in his press conference video below, but Stoffer let out entirely and Matt rocketed to the win.

Here’s video of the scene in the winners’ circle:

It was Matt’s first Indy win since 2006, his third win this season, 35th of his career, and moved him into the points lead heading into the Countdown to the Championship.

“We started with the Suzuki on Friday, but I just wasn’t happy with it,” Smith said. “It ran well up to the eight-mile, but I was just frustrated with it. I decided to go with the (EBR) and we had a good bike the rest of the weekend.

“All in all, I felt it was a great weekend for the bike. I’ve been to the finals a lot of times here and I’m just blessed to have two (Indy) wins. They better watch out for me. We’ve got a good bike and we’re going to defend our championship.”

Stoffer reached her 30th career final round and third this season on the strength of round wins against Joey Gladstone, Ron Tornow, and Steve Johnson.

Gladstone’s win streak came to a very sudden halt at Indy. I caught up with Joey, Cory Reed, and Michael Phillips in this video:

Ryan Oehler’s sponsorship success continues despite his struggles on the track. I talk with Ryan in this video:

I interviewed Jerry Savoie after the race:

Got the skinny from Gary Stoffer and Gaige Herrera just before the final:

I even got to talk to Joey D!

And this is a link to the whole gallery

The NHRA Camping World Drag Racing Series returns to action with the Pep Boys NHRA Nationals at Maple Grove Raceway on Sept. 15-18. It is the first event in the six-race Countdown to the Championship playoffs.