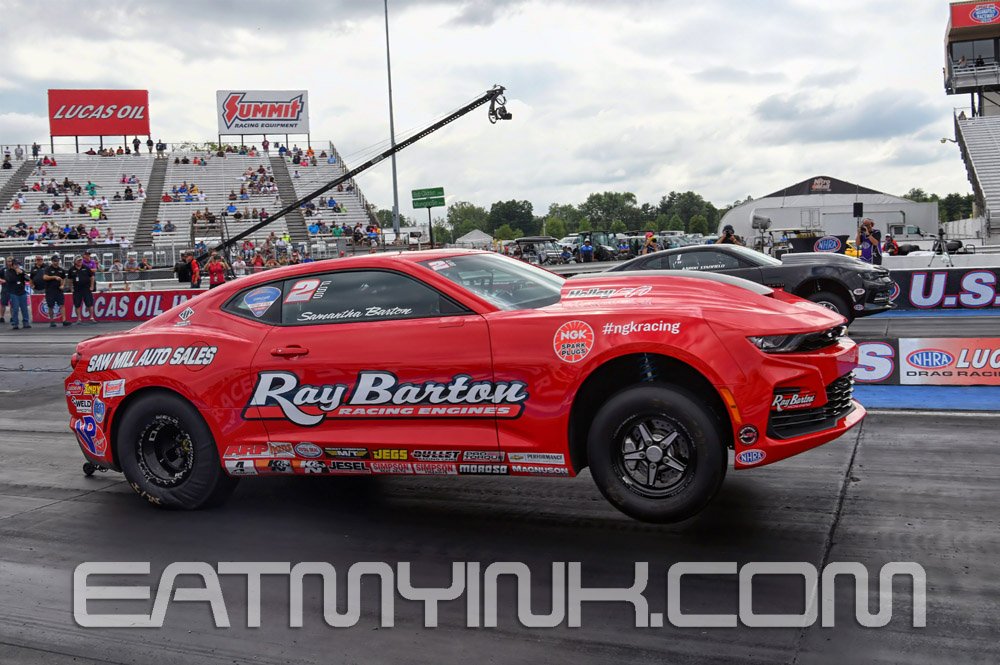 Barton—a second generation motorsport mastermind—started the day facing Warren Walcher after defeating Jason Dietsch in the first round on Saturday. Barton would handle his COPO to a 7.784-second pass at 176.40 mph to defeat Walcher and his WW Speed and Customs Dodge Drag Pak’s 7.847 at 175.59. The win set Barton up to face Bill Skillman in the quarterfinals.

Skillman, in his Ray Skillman Ford Cobra Jet, would be late on the tree at .104-seconds, letting Barton’s 7.779-second pass at 176.07 mph with a .031 reaction time defeat his 7.740 at 183.54. With the win, Barton collected the $1,000 bounty that was on Skillman’s head as the previous race winner through the Constant Aviation Factory Stock Showdown Bounty Program.

In the semifinals, Barton faced Mark Pawuk driving the DSR Empaco Equipment Dodge Challenger Drag Pak. Barton would once again win the round on the starting line with Pawuk leaving early by -.104-seconds. For the record, Barton would cross the finish line with a 7.790-second pass at 176.88 mph. More importantly, Barton took over the points lead with the semifinal win.

In the finals, Barton would take on No. 1 qualifier Aaron Stanfield and his Stanfield Racing Engines COPO Camaro. Stanfield, who had a first-round exit in his Pro Stock Camaro, stayed side-by-side with Barton but Barton’s starting line advantage, a .020 to a .037, prevailed at the finish line. On a hole shot, Barton’s 7.786 at 176.77 defeated Stanfield’s 7.781 at 176.47 mph, a margin of victory of only .012-second.

“It was pretty cool to get this done today. There was some really tough competition out there. The icing on the cake was taking out Skillman, collecting that bounty and then going around him in the points with our semifinal win,” Barton said. “I have to thank my dad, my wife, the whole Barton team, all the guys at the shop. I’m freaking out a little. It’s Indy.”

On his way to the finals, Stanfield the two-time defending  Factory Stock Showdown champion defeated Lenny Lottig and Anthony Troyer before having a bye into the finals.