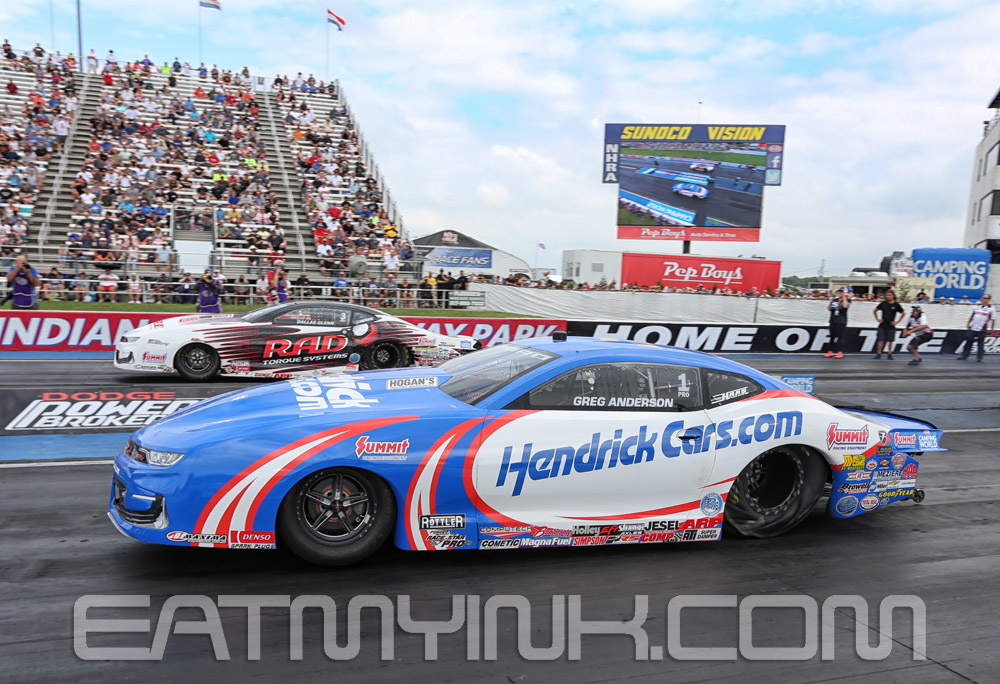 Anderson drove to the milestone win with a run of 6.587-seconds at 208.07 mph in his HendrickCars.com Chevrolet Camaro to defeat Dallas Glenn in the finals, becoming just the second driver in NHRA Camping World Drag Racing Series history to reach 100 career victories. He knocked off Fernando Cuadra Sr., Troy Coughlin Jr., and Fernando Cuadra Jr. to reach the final round, making the quickest run of each round of eliminations.

Glenn reached the final for the second time this year by knocking off Kenny Delco, Kyle Koretsky, and Erica Enders, who will enter the playoffs as the points leader. Dalla went red in the finals, handing the five-time world champion his seventh Indy win and one of the best moments in his incredible career.

“I don’t know if I can explain how meaningful this is,” Anderson said. “It’s incredible and this (100th) win was meant to happen here. Indy means everything to me, and I’ve said that my whole career. Nothing compares to this place and to get my 100th win here, I couldn’t possibly ask for anything more. This just means everything to me. It’s been a while since I’ve won here and it’s hard to win here, so it really makes you appreciate it. It’s probably my most special win here because of that. It’s just unbelievable.”

HOW MEANINGFUL IS THE MILESTONE?

“It’s incredible. I kept asking myself what do I have to do to win? It just wasn’t meant to be. It was meant to be in Indy. I’ve made no bones about telling everybody all my career how special Indy is to me. It’s an out-of-body experience when you can win here at Indy and to get the 100th here I couldn’t ask for anything better. It means everything to me.”

YOU’VE COME A LONG WAY AS A DRIVER. WHAT HAS BEEN YOUR WORK ETHIC?

“I had a good, basic skill set when I came to Warren (Johnson). There’s no question that Warren opened my vision to a lot of different things and educated me on a lot of things. I learned that northern Minnesota work ethic that has followed me all my career. I tell people every day that I’ve never met anyone in my life that has failed by working hard. I’m not a brain surgeon. I’m not the smartest whip out there, but I work hard. That’s a valuable lesson.”

YOUR THOUGHTS ON BEING IN THAT EXCLUSIVE CLUB?

“It’s incredible. About three years ago when I was trying to chase down Warren with 97 (wins), I tried not to think about it. I was having too much fun racing, still thinking I could race forever. I don’t think I’m done by any means but I’m definitely closer to the end of my career. It’s hard to come out and compete with these kids so I know my days may be numbered but I’m not done. I think I’ll get a few more and I plan on doing this until I can’t win anymore. Sometimes, it’s good to have a few of us crusty old veterans out here. I used to win Indy fairly often. We won six times between 2001 and 2011 and I thought I’d have 10 of them at some point. I’m not going to get there but I think this is the most special one of all.”

YOU WOULDN’T HAVE 100 WITHOUT WINNING INDY SEVEN TIMES.

“It’s fantastic. I remember back in the day when we were winning quite often; it’s been since 2011 that I’ve won the U.S. Nationals. It’s been a long time, but from 2001 to 2011 we won six times. When you haven’t won here in so long, you can really appreciate it.”

YOU GOT TO TELL RICK HENDRICK THAT YOU GOT THE BIG ONE AT THE U.S. NATIONALS.

“Pretty incredible. He oozes cool. He loves to win. He doesn’t do this just for fun. He does it because he loves to win, he wants to win. When you call him or he calls you when you’ve won, he’s over the moon. It’s always a wonderful phone call.”

STARTING TO PEAK AT THE RIGHT TIME WITH THE COUNTDOWN NEXT?

“We just weren’t quite up to par, and we were getting outrun by (Elite Motorsports), basically. We have done a lot of work over the last three months, and it is starting to pay off. We are starting to climb that ladder back up with a car that can win again.”