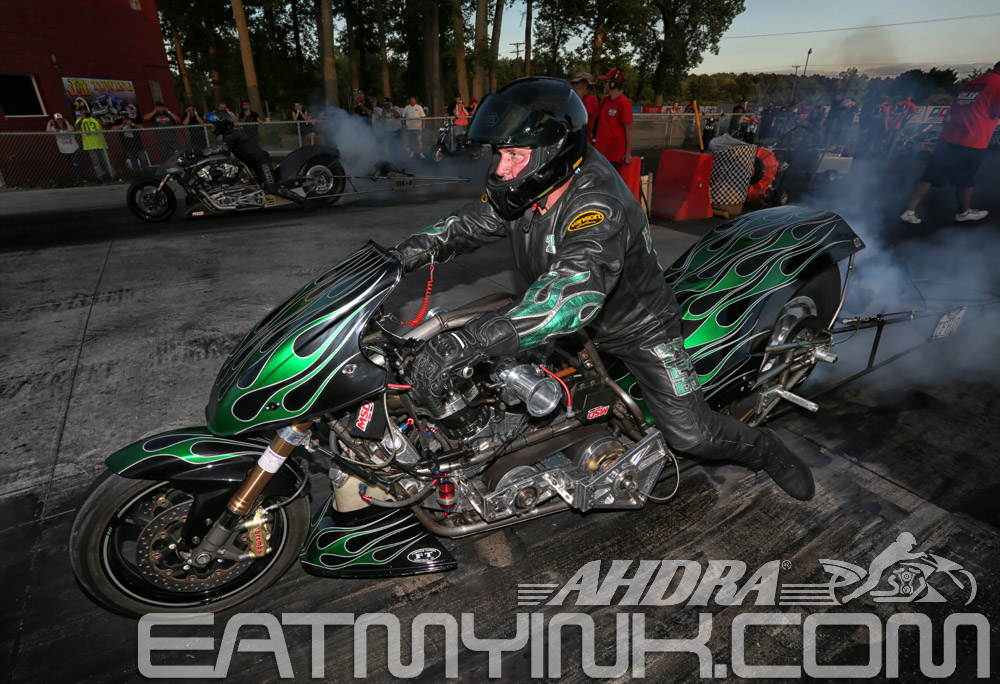 Top Fuel winner Kile wasn’t the fastest dog all weekend but kept the candles lit across the line each and every pass—most importantly in the final.

“Our motor was hurt all weekend,” said Kile. “I was the only guy that went down the track all six passes, and it probably was because I was a little underpowered. 6.60 And .70 was really as quick as that bike was going to run all weekend.”

Kile’s performance problem was a lack of good sealing rings that has plagued the class and it’s enormous pistons. “You know, we’re all struggling with this ring issue. It just ain’t sealing up good. When you come back from a pass, it’s got a bunch of nitro in the oil. You put two quarts in to race, you come back and you take four quarts out. You know that’s just slowing you down.”

Still, Kile’s consistency qualified him number one with a 6.69 at 206 mph.

Defending Top Fuel Champion Ryan Peery found good power and bite on raceday, though, and put down a couple .40s to establish himself as the performance leader.

But when Peery and Kile met in the final, Ryan’s performance lasted only about 330 feet. “The bike dropped a hole first,” reported Peery. “Then idling down the track, the motor stopped completely. The motor cases bearing keeper backed out and locked the motor up. A burnt hole in a valve either caused the initial problem or was a result of the motor suddenly stopping. Good thing it’s only money…”

“I went down the track but I got lucky in the final that Ryan hurt whatever he hurt,” said Kile. “But it takes a little luck to win these things too, you know. Consistency, reliability, and a little luck. So, great weekend.

“I want to thank the track and Harold and Perry, the owners that we worked with. They rolled out the red carpet for us to make this an annual thing. They were just great and went above and beyond what a lot of these tracks you get any more when you get there. The facility was awesome with some great tree coverage.

“I want to thank my competitors. You can’t race if you ain’t got competitors out there to race against, you know, so you always want to give them a shout out.

2020 champ Rich Vreeland’s bike died after the burnout for round one, handing Peery the bye that round. Billy “Jack” Jackson smoked his tire against Dr. Jimmy “Mac” McMillan in E1, and Dr. Jimmy lost round two to Peery.

Jason Pridemore made a rare appearance with his awesome blown bike, making incredible smoky burnouts before continuing the smoke show in the first 60 feet. And Curtis Heisler was on hand making licensing passes.

Hawaya Racing Nitro Funnybike champion Michael Balch had an easy one this weekend, being the only combination for that class in the house. Still, the dedicated Pennsylvania racer put in a lotta work and a lotta laps.

“Like always, (AHDRA owner) Bill Rowe put on a great event with smooth running classes,” said Balch. “Milan Dragway put out a great surface for us to compete on and overall it was a great event.

“My team went there with an attitude of winning. We wished there would have been more Funnybikes to compete with, but with diesel prices we can understand—it’s a huge cost.

“I could not be happier with the performance of my team. John Red Rhea was on the phone with Gregg Dahl and Damon discussing changes together. All the changes they made put me on a great running machine.

“With the support of my team—Red, Gregg, Damon, and Matt—I feel unbeatable. My sponsors are my backbone, they keep me able to fund it, and the Lord blesses me with the ability to do it.”

Balch will soon be blessed with extra Funnybike competition in the form of Vicksburg, Michigan’s Phil Lower on a Mike Romine-built piece. But on this particular weekend, Lower took the Hawaya Racing Pro Fuel win against veteran racer Rocky Jackson. Lower took the tree .077 to .119 and stayed out front for the 7.78 to 7.96 win.

“We tore up a lot of stuff yesterday, but we were up all night getting it back together, and it paid off,” said Lower, who rides Tyler Wilson’s old bike—freshly unwrapped and clear-coated.

“I couldn’t have done it without my crew,” continued the General Motors retiree. “Mike Romine helps me with the bike and helps me maintain it, Ricky ‘Grizz’ Lee, and my girlfriend Jen Worley. We had a lot of family here because it is a close race, and everybody kind of pitched in and we got it done. And other racers helped a lot because they had the parts.

“I also wanna thank Buddy Foss and Janette Thornley, they helped me out a lot. And Jack Romine also.”

Charging Charley Douglass has a bike to be reckoned with, taking a decisive GMS Racing Engines Xtreme Outlaw win in an all-turbo final. Douglass calmly gave up .058 at the tree to opponent Dwayne “Smokey” Gee before throwing down near-apocalyptic numbers on his way to a winning 7.87 at 177.39 mph. Depending on who you talk to, that pass ranks among the top three or four no-bar Harley passes of all-time—and on a still-new combination.

Dahl stakes a claim as consistency king with “Ten passes in the .60s in two weeks on local non-pro prep.”

“My Outlaw Xtreme turbo bike has been a very trying experiment,” admitted Douglass, who’s made 15 quarter mile passes on it to date. “I still have plenty more power to attempt to hook up.

“I started the weekend with T-n-T on Friday with no good passes. I struggled trying to keep the rear tire from smoking about ten feet from the starting line. I smoked one clutch pack Saturday trying to take as much clutch out as I could.

“Sunday morning I tried another combination and burnt the second clutch pack of the weekend. Going into first round of eliminations Sunday, I put a fresh Energy One Clutches clutch in and a new tune-up in the MaxxECU from Jesse Brown. We ran an 8.10 with a 1.306 60 foot, winning first round against Victor Gotay. Victor has helped me with tuning and clutch set-up since the end of last year.

“This was an emotional weekend for the Douglass Racing team. A very good friend of ours, Steve Allstaedt, was laid to rest on Saturday, so this win was in honor of him.

“I want to thank God for keeping me safe and sane. My wife Angel Douglass for being so supportive, I love you. My dad for being my teammate and best friend. My nephew Jacob for helping us at the track. Special thanks to the Ken Browne family for showing everyone a Harley could run with a turbo.

“My youngest daughter, son in-law, and two of my granddaughters spent Saturday with me at the track and that was great also. My “Brother ” Ralph also spent the weekend with us.”

Jason Broski might have the best name in racing, but he most definitely has a quick, well sorted out, all-motor Bagger that stays firmly flat and planted from launch to finishline. Broski won Horsepower Inc. Pro Outlaw Bagger against Street Kingz racer Reggie “Hamma” Elliott. Hamma nailed Broski .017 to .062 at the tree, but Broski’s Kibblewhites were opening and closing at wicked pace to carry him to a winning 9.07 against Hamma’s 9.90.

“It was a rollercoaster ride,” said Broski, who unloaded Friday with four 8 second passes in a row. That includes a side-by-side 8 second Bagger pass for only the second time and the first since 2020, according to Broski. “It was me and Victor Gotay, with him riding Dwayne Gee’s bike.”

Broski reported that during Saturday qualifying, making no changes, his bike was losing ET every lap and 4 mph. “After sleeping on it, I made changes for Sunday’s eliminations. MPH instantly came back and ET started dropping.”

In the hottest part of the day with density altitude in the 2800s, Broski made one more lap—an 8.94 that he says is a record-setting ET for an all-motor M8.

Broski also runner-upped to Street Kingz racer and number one qualifier Gee in MTC Pro Comp Outlaw. Smokey took the tree by .013, then wicked the turbo up to a winning 8.74 at 157 to Broskl’s 9.01 at 148.

“I had a great weekend, first time on my turbo bike,” said Gee. “Been a long road getting back right since Victor wrecked it (at Gainesville). Victor, Hammer, and Khole Sellers been working hard to get me there. My goal was 8.99 but smashed that with the 8.74, and I cut the tree on Broski in the finals and ran my best pass ever under pressure.”

The Cronenberger name was omnipresent in AHDRA winners circles of the 2000s, and Brad Cronenberger brought it back at Milan with 11:50 and Universal Fleet & Tire 10.90 wins.

“I took a few years off (and) was racing off-road dirtbikes, because that was something I could get my son involved with, too,” said Brad. “I decided to come back out when I saw they were bringing the Junior Dragbikes back. I should have my son in there for Rockingham.

“I really only signed up for the 10.90 class to try and get some seat time on my bike after not racing for so many years. I was fortunate to catch a few breaks along the way and managed to make my way through the ladder.

“I wanna thank my wife. She’s the one who convinced me to get back out there.”

The coolest thing that happened all weekend? That would be the return of Junior Dragbikes and the many laps made by the Hines brothers. More of this please!