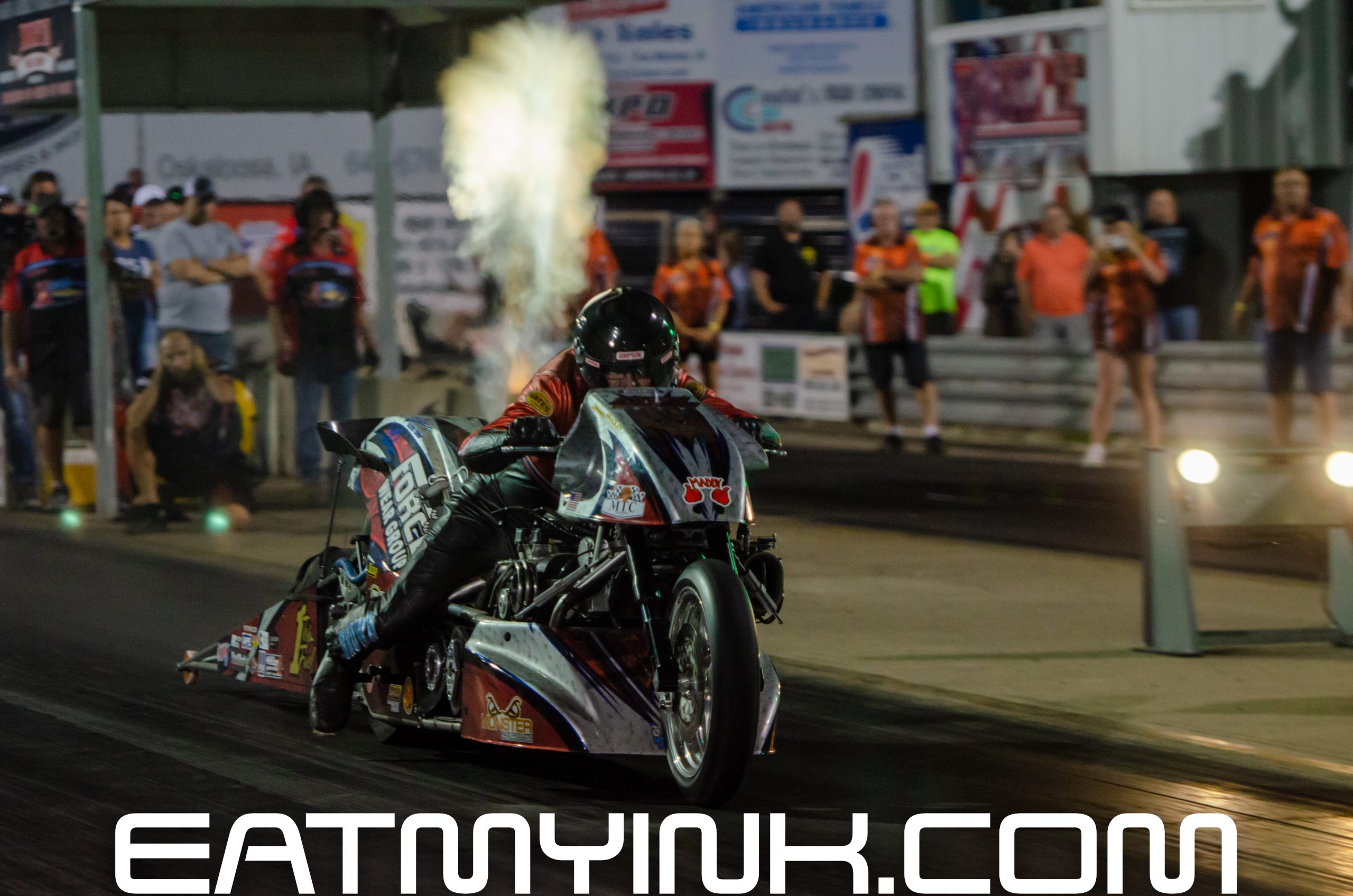 The 26th annual Night of Fire presented by MUSCO Lighting at Eddyville Raceway Park was an amazing event like always. A wide variety of pro competitors and a large number of sportsman racers put on a good show for the two-thousand fans that showed up. This small cozy family-run eighth-mile dragstrip just off of US Highway 63 in south-central Iowa is the perfect place for a Saturday night filled with racing and pork tenderloin sandwiches.

The legend Sam Wills and the middle-aged gun Mitch Brown were back at Eddyville Raceway Park for the first time in four years, both very happy to be back to the event which they both call a favorite. The pair of 1,500-hp motorcycles made three passes on Saturday. The first pass was originally meant for Friday but rain rolled through and blew that idea off the table.

On Saturday both bikes fired up behind the water box for their test pass to make sure they had it dialed in for the big show. Brown left the line but overpowered the racetrack and coasted through the traps. Wills had a nice full pass through the timing beams after Wills shut it off but the parachute malfunctioned and didn’t pop out leaving Sam to do all the braking himself the candy orange motorcycle just ran off the end of the track into the field with no damage done. Both bikes were ready for the show after some minor tweaks.

Brown dialed back the tune for the first run of the show and Wills and the crew got the parachute problem figured out for their second run. The pair swapped lanes for the second run, both running respectable numbers. Sam ran a 4.14 at 167 and had no problems in the shunt down. Mitch clicked it off early to ensure he would make the turn running a 4.56 at 126.

The two swapped lanes again for the final pass of the night the nitro-breathing motorcycles seemed to be a crowd favorite and they were eager to see the final run. Wills took the win again going through the traps at full steam running a 4.11 at 185 the chute came out late and the motorcycle backfired during the shutdown causing the supercharger to pop off, the culmination of these two things led to Wills running off the track. Slight damage was done to the bike but the team will be back in Norwalk for the Night Under Fire and possibly a new solution for the parachute problem.

Two 4.60 bikes were brought out to do two exhibition runs to show the fans what 4.60 racing is all about and to promote the Motorcycle Mania event that takes place in August.

Chase Van Sant and Dan McCarten put on a great show with big burnouts, long nitrous purges and close racing. Both riders took the runs as testing and not so much competition but it sure didn’t look like that.

Two nitro funny cars took to the 1/8th mile track on Saturday for two runs. Joe Hass driving the 57’Chevy American Way funny car and John Lawson driving Runaway, the orange and black Camaro-bodied fire-belching monster. The two lined up and fired up for their first run Lawson quickly lit the tires up. In the other lane, the patriotic funny car was fired up but quickly shut off when the team and track staff saw fuel spilling out and it turned out it was just a bad fitting on the all-valve system the team quickly turned the car around and got it fired back up to make a soft pass for the fans.

Two solid runs from both cars and the teams were ready for round two later in the night hoping to put on a good show for the fans with plans to turn the cars up a little bit.

The pair lined up again for the second to last runs of the show. With it now dark the fans were ready to see some flames. Lawson quickly fired up and did a nice smokey burnout. Hass in the 57’ took a while to start up. Hass completed a smokey and fiery burnout. Both cars lined up in the first bulbs idling angrily. The lights dropped and Lawson got a slight advantage off the tree but that wasn’t enough to fend off the American Way funny car. As both cars thundered down the track Joe pulled ahead to run the quickest pass of the weekend. Hass going 3.59 at 224 with Lawson going 3.83 at 179. The two had a great side-by-side run with big flames all the way down the track exactly what the fans came to see.

Randy Meyer racing brought two nitro-injected dragsters to the Night of Fire one piloted by Megan Meyer and the other by Matt Sackman. Megan took a test hit before the show. A solid pass down the track going 3.60 proved she wasn’t there just for fun.

The two drivers lined up two times later in the day to show the fans some good side-by-side racing. The first run didn’t go to plan for Sackman giving the round one win to Megan but both showed the crowd what to expect for round two. The nitro-guzzling dragsters lined up one more time after the sun went down.

Side-by-side burnouts from the two Randy Meyer Racing dragsters was just a teaser for what the talented drivers had in store for the crowd in just a few seconds. Meyer got off the tree with a two-hundredths advantage over Sackmann but a fueling problem for Megan saw Matt just scoot by at the end with the pair crossing the line neck and neck. Sackmann ran a 3.61 at 220 Meyer ran a 3.70 at 182. “It was cool to be back there,” said Sackmann after not having made a pass at Eddyville in over ten years.

Larry Larson and Robin Roberts took to the track five times on Saturday showing the fans what their cars are all about. The gray Cadillac of Larson and the purple Pontiac of Roberts seemed very quick right out of the gate making a-b passes with ease.

The two passes during the show were both side-by-side nail biters. Both cars seemed to have strengths and weaknesses at certain parts of the track. Larson seemed to struggle a bit short track with the tires visibly shaking and leaving uneven rubber on the surface whereas down the track he was strong and the MPH looked high.

For Roberts, the car had no visible troubles short track but the car always seemed to go sideways and towards the center line further down the track. The final run between the two was a great race Larson and Roberts got off the line evenly down track Roberts went sideways and caught it right before the center line avoiding the block and taking the win.

The Extreme 3.95 class had four blown dragsters looking to compete in the show on Saturday unfortunately Scott Cusey broke before qualifying which left three cars for the show. The cars ran two qualifying runs and then later in the day would run eliminations. Afton Swanson (number one qualifier) and Rusty Kramer (number two qualifier) lined up together in eliminations.

Afton would go on to win the round even with a broken transmission running 4.10. Even with an early shut off the Trick-Tools dragster of Rusty Kramer broke out of the index running a 3.90 at 185. Jared Micetich (number three qualifier) was the odd car out in both rounds of eliminations he was given by runs but still but on a good show for the crowd. Special thanks to Trick-Tools crew chief Bruce Van Sant for the helpful information.