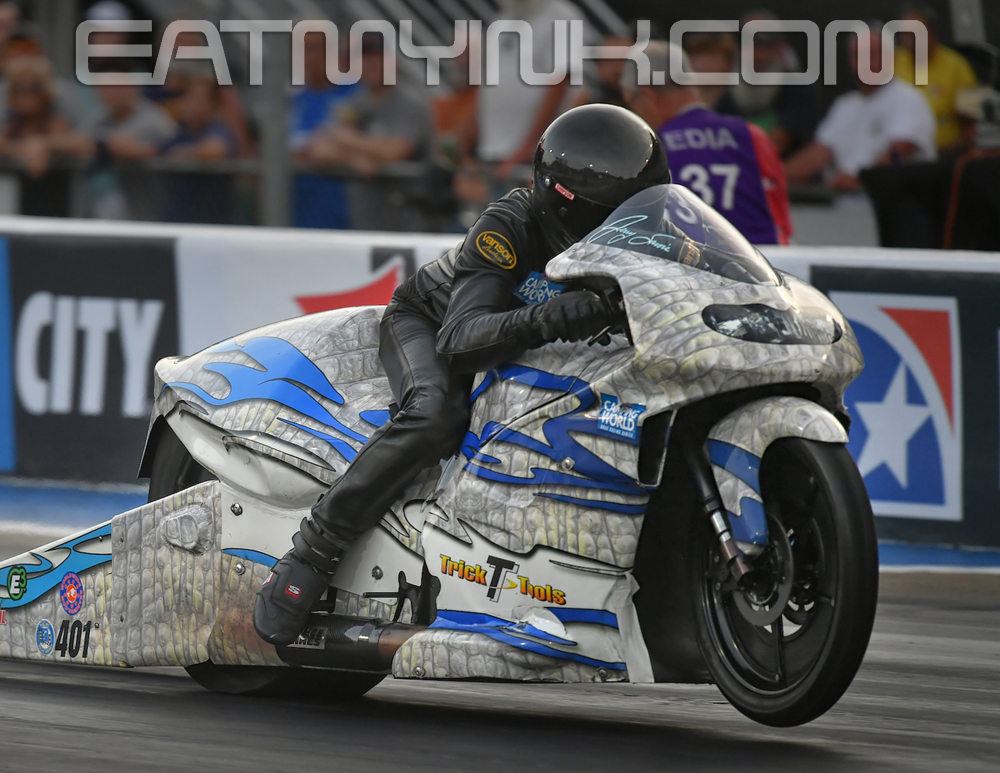 While NHRA’s strange decision to add weight to V-Twin Pro Stock Motorcycles after Denver seems to have decidedly hamstrung that configuration, the Sonoma Suzuki field is rich with mechanical diversity.

Interesting enough, but then it gets more interesting. Finally in 7th we get the first V-Twin—Angie Smith on her MSR-built, Gen2 S&S powered Buell at 6.766/203.95.

The specific combination that Savoie is running made it’s debut Saturday. While the WAR team ran one qualifier at Norwalk with their radical new plain bearing Suzuki, that was in the chassis with the WAR Hayabusa body. Here in Sonoma, the team had the motor in the TL-bodied chassis.

And remember—right now the plane bearing motor is topped with a 2-valve head. And the clutch is totally different, an MTC Gen2 based on a GSXR1000 with a smaller basket.

The clutch might be the most difficult component for Kulungian to get acquainted with this weekend. The bike ran a 1.06 60 foot in Q2 that Savoie found lacking. “Shoulda been a 1.04,” said Jerry.

But the bike actually fell of a number to 1.07 in Q3. “It’s gonna go faster,” promised Kulungian. “There’s a lot on the table for the tune-up. I’m gonna start tuning it and hopefully get what we want.”

What does the team plan on running raceday?

“Time will tell. I’d love this thing to be competitive in the field, and I’d run it all day tomorrow. That’s what I’d like. But we’re gonna race with what gives us the best opportunity to win. And if I can get ET out of this thing in one run—first of all, I think it’d be pretty remarkable. I think it’d be a testament to the team and how well they can do it in a very short amount of time. But I’m also realistic, that may not be our circumstances.”

Bonham is riding the Ryan Oehler team bike, most recently ridden by Chip Ellis at Norwalk. The bike has an interesting history. Mitch Brown reminds me that the bike was originally owned by Ron McPhee with David Hope riding.

Ellis’ first shot at riding the bike was in 2011 as a Harry Lartigue-owned, Kuryakyn-sponsored, Vance & Hines-entered Buell. John Hall bought and raced the bike several years ago, and it’s now in Oehler’s hands and rebodied with what used to be called an EBR.