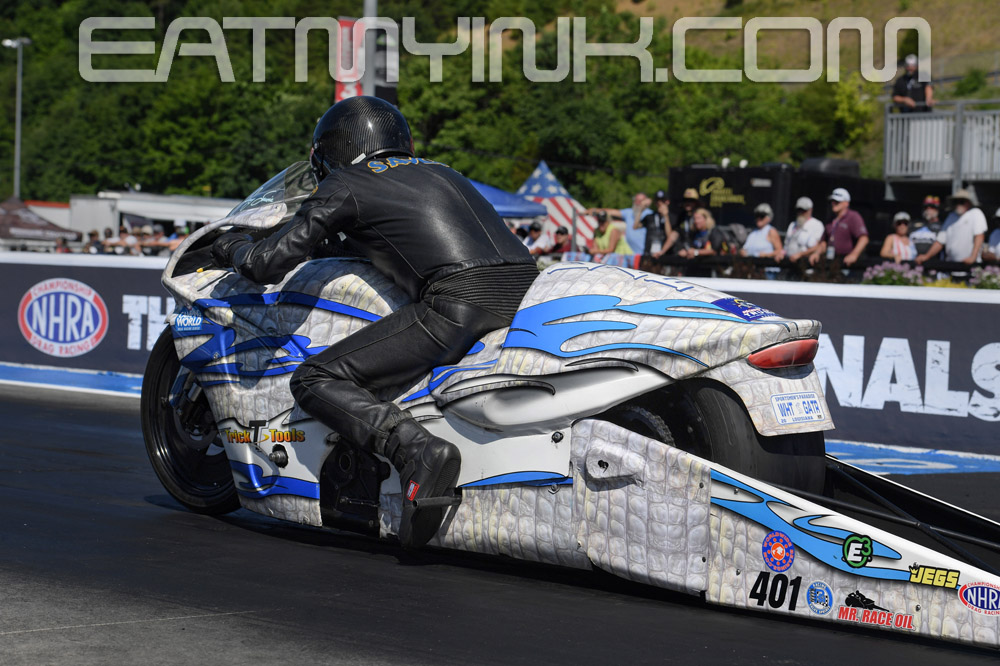 A string of fantastic reaction times, smooth riding on his White Alligator Racing Pro Stock Motorcycle Suzuki, a first-rate crew, and a last gasp switch to a 2-valve Suzuki back-up motor swept Jerry Savoie to his first win of 2022.

Plans changed a bit when teammate Karen Stoffer’s bike wasn’t running as expected in Friday qualifying. The team discussed options and putting the lone 4V back-up on the trailer in her bike was option number one. “You know that means you won’t be able to use that motor, once it’s in competition, if you need it on Sunday,” WAR tuner and manager Tim Kulungian told Savoie before the swap was made.

“Go ahead and do it,” Savoie told Kulungian. “She deserves to have the best bike we can give her.”

Stoffer’s bike still wasn’t the record-setter it was to start the season. She qualified 12th and lost to Marc Ingwersen in E1 on raceday.

It was after that semifinal run that Savoie told Kulungian that something wasn’t right. “Jerry said the bike felt lazy in third and fourth,” said Tim. But talk was wasting time, and when Kulungian emerged from the team lounge to the crew announcing “We’re gonna change motors!” there were about 35 minutes left before the bikes would be first out for the finals.

A mad thrash ensued and NHRA.tv viewers saw Gary Stoffer joining Kulungian and WAR crew Keith Nichols and Harvey Deane to complete the swap and make a mad dash to the starting line.

What those viewers didn’t know, and what you’re reading here for the first time anywhere, is that the team had only a 2V Suzuki to put in the frame rails. If you’re an Eatmyink regular, you know that recent rules changes by NHRA have added weight to 4V Suzukis and subtracted from 2Vs.

Just last week, Kulungian praised the rule change and told me that “100 percent we will need to fall back on a 2-valve motor some time this season, and we would like to be competitive when that happens.”

4V Suzukis have to be a full 40 pounds heavier than 2Vs, and the WAR crew was able to throw off some weight in the thrash—not as much as allowed, though.

In the meantime, as final round opponent Angelle Sampey waited with her Vance & Hines team in the Bristol tunnel, NHRA made a swap of their own—switching PSM and Pro Stock Car in the finals run order to accommodate the thrash.

“Thanks to NHRA and Vance & Hines for waiting on us,” said Savoie, who nonetheless made it to the ready line before any finals were run, as NHRA also had to wait for live TV.

After the delay, Sampey went red against fellow Louisianan Savoie and threw away a quicker-but-losing 6.90 to Savoie’s 6.92.

“I usually don’t let things get to me and I put my faith in my crew,” said Savoie, who picked up his first win since 2020, his 14th overall, and first at Thunder Valley.

“I’m 63 (years old) and to be out here running with all these youngsters is amazing. I just wanted to win one race and now I’ve got 14 and a championship. I’ve been blessed. This was an awesome weekend, and I don’t think I could ask for anything more.

“Big thanks to all our sponsors, especially Trick-Tools for their support in getting us out to these races.”

Kulungian also gave a shout-out to Trick-Tools, and to his crew Deane and Nichols. “When we told them to swap that motor, Harvey and Keith just went to work and did the job—flawlessly. I can’t say enough about what they accomplished in that short amount of time.”

Sampey, who qualified No. 1, reached her first final round this year and 79th in her career with round wins against LE Tonglet (another Louisianan), Ryan Oehler, and Ingwersen.

Tonglet was filling in for Kelly Clontz on her 4V Suzuki. “LE was excited to ride Kelly’s bike and get to work with Chris (Clontz) and Andrew (Hines),” reported LE’s brother GT Tonglet. “They got it to come around on Sunday.”

With LE on the Clontz bike, Michael Phillips’ nephew Malcolm Phillips rode the Tonglet family 2V Suzuki at Bristol. “Friday night was Malcolm’s first full pass ever on a Pro Stock Motorcycle and he did great,” said GT.

“We struggled with the tune-up on Sunday. The track was stickier than we expected and shook the tire hard. But we’re happy with the back half we had.”

Check out Malcolm on NHRA.tv:

Also happy was Ingwersen and his crew of Jon and Parker Miller. Shooting for his first-ever PSM final, Marc put .069 on Angelle at the tree and out-60ed her by .015.

“By the data, we had about a 6.92 lap going,” said Parker. “The clutch lever stripped out and put the bike on and off the 2-step several times before Marc pulled the clutch in to save our motor. Still, only having one motor, it was the right move.”

A Gen1 motor at that, as the team has been waiting for a year now for S&S to deliver them a Gen2.

Still, the Ingwersen/Miller program has made great strides this season. “Honestly, we’ve had the horsepower we have currently for two, maybe three years now,” continued Parker.

“Early in the year we tested a few different lock-ups and struggled. The last two races, my dad (Jon) has really got the clutch dialed in. We’ve also got some great help from a close friend of mine (let’s just say Richard Gadson—editor) and really got the Motec issues sorted out and dialed in. Marc has been doing an amazing job driving the bike on the starting line and hitting his shift-points.”

It’s turning out to be a very interesting year in Pro Stock Motorcycle.

A big shout-out to Eatmyink friend David Barton, who won Constant Aviation Factory Stock Showdown in his Saw Mill Auto Chevy COPO Camaro and took over the points lead by 13 points with only four races left.

“I feel like we have good momentum going,” ,” said builder/tuner/driver Barton. “Every single race we’ve had a car in the final. As a business, I think we’re doing good in that respect. We have a good team effort and a lot of strong cars moving forward. We’ll keep it rolling as good as we can.

“Everything went down exactly how it should have. Skillman went out first round Saturday night, we took down Stanfield second round, Davies went red. We had it going on. We’re first in points now.

“I am speechless. This category is insanely hard. You’re either smoking the tires or pulling a 200-foot wheelie. It’s hard to find a balance.

Ron Capps tied Tony Schumacher for the most NHRA wins in Bristol Dragway history, picking up his sixth Funny Car win at the track on Sunday at the

Capps powered to the quickest run during every round of eliminations on Sunday in Bristol, including a pass of 3.984-seconds at 324.36 seconds in the final round in his 11,000-horsepower NAPA Auto Parts Toyota GR Supra to defeat Tim Wilkerson. It also marks the first win in Funny Car for the new GR Supra. Capps advanced to the final round with impressive victories against Paul Lee, No. 1 qualifier Robert Hight and defending event winner Alexis DeJoria. In the final, he made the only three-second run in eliminations on Sunday to earn his second this season and a remarkable 70th in the defending world champ’s outstanding career.

“It’s an amazing thing and I’m living the dream,” Capps said. “Today felt different because we worked really hard at this one, and we knew that win for Toyota was out there. Everyone wanted to get that first one in the Supra and I’m blessed we got to do it. To run 3.98 in the final was unbelievable. This is a very demanding track every time we come here, and you can’t take your mind off it for a second. These wins, where you have to earn it, it really means quite a bit more, it seems like it.”

Tim Wilkerson reached the final for the first time this season by getting past Jack Wyatt, Chad Green, and John Force. Matt Hagan maintained the points lead in the class.

In Top Fuel, Justin Ashley rolled to his second straight final round and finished the job on Sunday in Thunder Valley, going 3.813 at 325.30 in his 11,000-horsepower Phillips Connect powered by Vita C Shot dragster to defeat Shawn Langdon. It gives Ashley his second win this season and the fourth in his career, and his first victory at Bristol was a meaningful one with his father in attendance. Ashley, who qualified 14th but responded on raceday, got past Josh Hart, Doug Foley, and four-time defending world champ Steve Torrence to reach the finals before picking up the victory on Father’s Day.

“Happy Father’s Day to all the dads out there, who make dreams like this possible,” Ashley said. “I really have to take a second thank everyone who allow us to come out here and be successful. (Crew chiefs) Tommy DeLago and Mike Green did such a good job with this Phillips Connect Top Fuel dragster all day. We’re very blessed, very privileged to be here and we’re enjoying it. This Bristol track has so much history,” Ashley said. “When you look up and see all the famous names [in the Legends of Thunder Valley]. It’s impressive and we’re very fortunate to get the win.”

Shawn Langdon reached his first final in 2022 after knocking off Spencer Massey, No. 1 qualifier Mike Salinas and Antron Brown. Brittany Force maintained the points lead, as Ashley climbed to third.

In one of the wildest Pro Stock Car final rounds in recent memory, Aaron Stanfield outlasted Elite Motorsports teammate Erica Enders in the championship round, going 8.801 at 103.98 in his Janac Brothers Chevrolet Camaro. Stanfield got loose early in the run, but then Enders ran into trouble, suffering an engine explosion, and the young standout was able to chase her down to pick up the win on Father’s Day. It was Stanfield’s first win from the No. 1 position and also the first time winning in the final round against Enders, who was seeking her fourth straight win.

Stanfield got to the finals with victories against Wally Stroupe, Fernando Cuadra Jr. and Kyle Koretsky and then drove to his sixth career victory – and first at Bristol – to cap off an impressive weekend.

“I cut it loose, and it shook at the top of low gear, so I stopped. Then, I could see smoke out of her car and Big Al [Lindsey, crewman] was on the radio telling me to go, go go,” Stanfield said. “I stuck it back in gear and tried to get there. It for sure did not go according to plan. Sometimes it goes like that. As a team we did a good job today. This the best gift I can give my dad [Greg] on Father’s Day. My dad and I love being here in Bristol.”

Enders, who maintained the points lead by advancing to her fourth straight final, fifth this year and 66th in her career, knocked off Cristian Cuadra, Matt Hartford, and Dallas Glenn to set up the final round against her teammate.

story by Tim Hailey with help from NHRA and Elon Werner, videos courtesy of NHRA