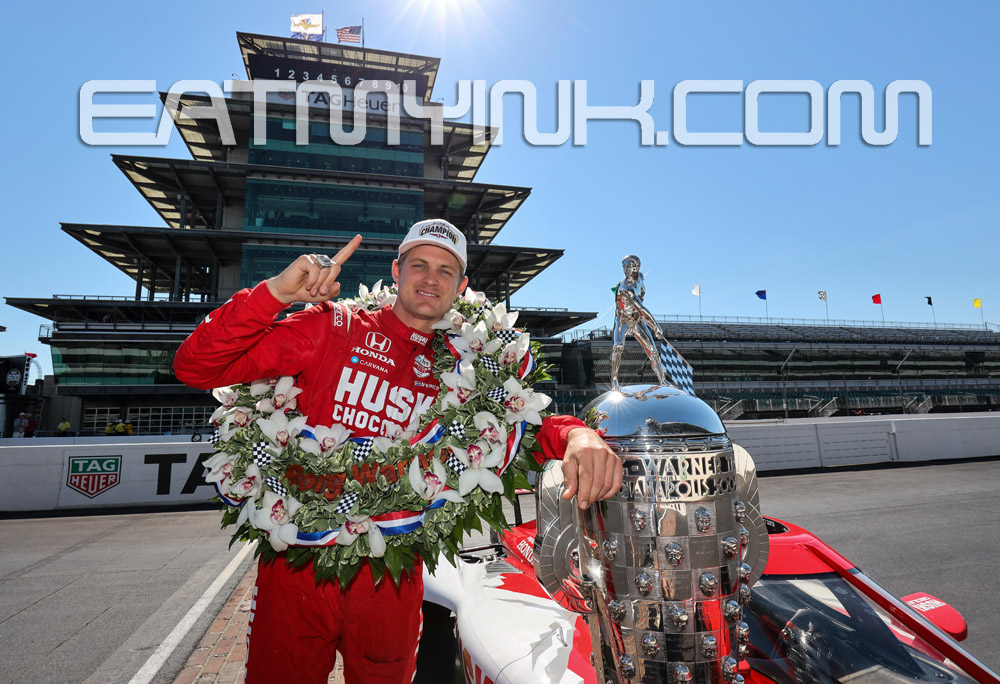 It’s the largest purse ever in the century-plus history of “The Greatest Spectacle in Racing.” The Chip Ganassi Racing driver’s prize is also the largest winner’s payout ever for the world’s largest single-day sporting event.

Ericsson won the 500 in a scramble after a late red flag at Indianapolis Motor Speedway, earning his first career 500 victory. The Swede won under caution in the No. 8 Huski Chocolate Chip Ganassi Racing Honda after Sage “Krash’em” Karam crashed in turn 2 on the final lap.

Ericsson led only two laps until the final ten, but thoroughly gapped the field before his teammate Jimmie Johnson crashed with 6 laps to go, also in turn 2—one of many there this year and ever since this particular Dallara variation debuted. Race directors threw the red flag after the Johnson crash to clean up the mess and finish under green—a procedure not strictly in the rulebook but prone to the whims of IMS and IndyCar.

That bunched up the field and put Ericsson’s runaway win in great peril. “I couldn’t believe it,” Ericsson said of the nearly 8 minute red flag stoppage. “You can never take anything for granted, and obviously there were still laps to go, and I was praying so hard it was not going to be another yellow, but I knew there was probably going to be one. It was hard to refocus, but I knew the car was amazing.”

Here are the race highlights:

Marcus seemed like a sitting duck on the restart with two laps left, and I fully expected him to get passed by any number of drivers and have to draft his way back around. But Ericsson threw down an excellent “Serpentine Shel!” routine and kept the whole field at bay despite what could have been an outside of turn 1 pass á la Rick Mears by Pato O’Ward. But O’Ward is no Mears….not yet, anyway.

“He was going to put me in the wall if I would have gone for it,” O’Ward said. “We were alongside each other. It’s frustrating. It’s bittersweet. I’m so proud, but it definitely stinks.”

Said Ericsson: “I was not going to put him in the wall, but he had to work hard to get around me there. I knew I could hold my line. I was going to go flat. He was going to have to go two-wide through (Turn) 1 to get there. I knew if I went on the inside into 1, I could keep my foot down. I was hoping I could keep my foot down. That was my plan. It worked.”

Ericsson started to pull away on the back straightaway after repulsing O’Ward, speeding toward turn 3, when Karam crashed in 2 in his No. 24 AES Indiana DRR Chevrolet. The fifth incident of the day in turn 2 triggered the caution period that ended an event featuring 38 lead changes among nine drivers.

“I knew the Huski Chocolate car was fast enough, but it was still hard,” Ericsson said. “I had to do everything there at the end to keep him behind. I can’t believe it. I’m so happy.”

Former Formula One driver Ericsson became the second Swede to triumph in the “500,” joining 1999 winner Kenny Brack. This was the first 500 victory for team owner Chip Ganassi since 2012 and his fifth as a solo owner and sixth overall.

Here’s a 2019 Eatmyink interview with Ericsson:

“First of all, I’m really proud of the team,” said O’Ward. “They gave me a really good car. I was so happy with the handling and we executed everything perfectly. We hit the fuel perfectly, we made no mistakes, and positioned ourselves perfectly to have a shot at it.

“We got done with that last pit stop, Felix undercut us. I then stopped and started to catch up with him, but Marcus [Ericsson], out of nowhere, came out with some insane speed. He got past me like I was standing still then caught Felix within two laps. I knew when the restart happened I would have one shot, I’d have to go flat and it still wasn’t enough.

“So sadly, they had the faster car. We need to do a better job to beat them, but I’m really proud of the job we did today, it’s my best result in the Indianapolis 500. It’s a tough pill to swallow after a good race.”

Despite crashing out, seven-time NASCAR Cup Series champion Johnson earned Indianapolis 500 Rookie of the Year honors and earned a $50,000 bonus, adding to a total take home prize of $207,900.

David Malukas was actually the highest-finishing rookie in 16th. “It feels really good,” said Malukas. “I mean, that was such a long race. We were in the top 10 the whole way, then a yellow [caution flag] comes out that’s simply bad timing for us, and drops us down to about P20. But then we worked our way back up to 16th so, overall, we finished the race and I’m real happy.”

2013 Indy 500 winner Tony Kanaan finished third in the No. 1 The American Legion Chip Ganassi Racing Honda, as the Ganassi team finished a strong month of May by putting two cars in the top three. Kanaan recorded the fifth top-three finish of his “500” career.

“A great win for Honda, a great win for the team,” said Kanaan. “I mean, Chip only asked us to do one thing: ‘Don’t hit your teammate’. I was thinking about that when we restarted after the last yellow. Marcus did an awesome job and deserved to win. I’m already looking forward to coming back next year.”

Felix Rosenqvist placed fourth in the No. 7 Vuse Arrow McLaren SP, as Arrow McLaren SP placed two cars in the top four. “Like always, there’s mixed feelings at Indy if you don’t win the race,” said Rosenqvist. “But it was a good day. I think this was a huge statement for us as a team to be able to be up there all race, all month with the GP as well.

“It’s a totally different energy in the team to previous years, I think we’re gaining confidence, and we saw that in the middle of the race, when we came in to pit in P8 and came out in P4. That got me so pumped. I feel like that was a turning point for us, when we prove that we can make up four places in the pits, in the biggest race in the world, that’s super cool.

“The team, along with our partners Chevy, did a great job all month to give me a great car. I’m really happy for everyone in the team. Obviously I wanted more, but we’ll build on this and try and get some wins over the rest of the season.”

Alexander Rossi, winner of the 100th Indianapolis 500 in 2016, rounded out the top five in the No. 27 NAPA AUTO PARTS/AutoNation Honda after starting 20th.

2021 winner Helio Castroneves finished seventh after starting 27th in the No. 06 AutoNation/SiriusXM Honda, gaining the most positions from start to finish in the race.

Pole sitter and six-time IndyCar champion Scott Dixon appeared to be the driver to beat, as he led a race-high 95 laps and became the all-time lap leader in Indianapolis 500 history with 665, surpassing the record of 644 by four-time winner Al Unser Sr. But Dixon was assessed a speeding penalty entering pit lane as he stopped from the lead on Lap 175 in the No. 9 PNC Bank Chip Ganassi Racing Honda.

The subsequent drive-through penalty dropped the 2008 Indy 500 winner through the field, and he ended up a disappointing 21st. “It’s heartbreaking, to be honest,” Dixon said. “I came into the pit and had to lock the rears and kind of locked all four. I knew it was going to be close. I think it was a mile an hour over or something. Just frustrating. I just messed up.”

Results Sunday of the 106th Running of the Indianapolis 500 presented by Gainbridge NTT INDYCAR SERIES event on the 2.5-mile Indianapolis Motor Speedway, with order of finish, starting position in parentheses, driver, engine, laps completed and reason out (if any):

Ericsson took the lead in the IndyCar standings with his third career victory, boosted by the double points awarded in this event. In a fateful twist, all three of his victories have featured red flags, as his wins in 2021 at Detroit and Nashville also included race stoppages.

The Indianapolis Motor Speedway opened its gates to race fans with no restrictions for the first time in three years, and more than 325,000 are said to have attended Sunday’s race, making it the largest-attended single-day sporting event in the world since the beginning of the COVID-19 pandemic.

The next NTT INDYCAR SERIES race is the Chevrolet Detroit Grand Prix presented by Lear on Sunday, June 5 at the Raceway at Belle Isle Park in Detroit. The race will be broadcast live on USA Network and the INDYCAR Radio Network starting at 3 p.m. (ET).

story by Tim Hailey, IMS, Honda, and Chevrolet; photos by Hailey and IMS