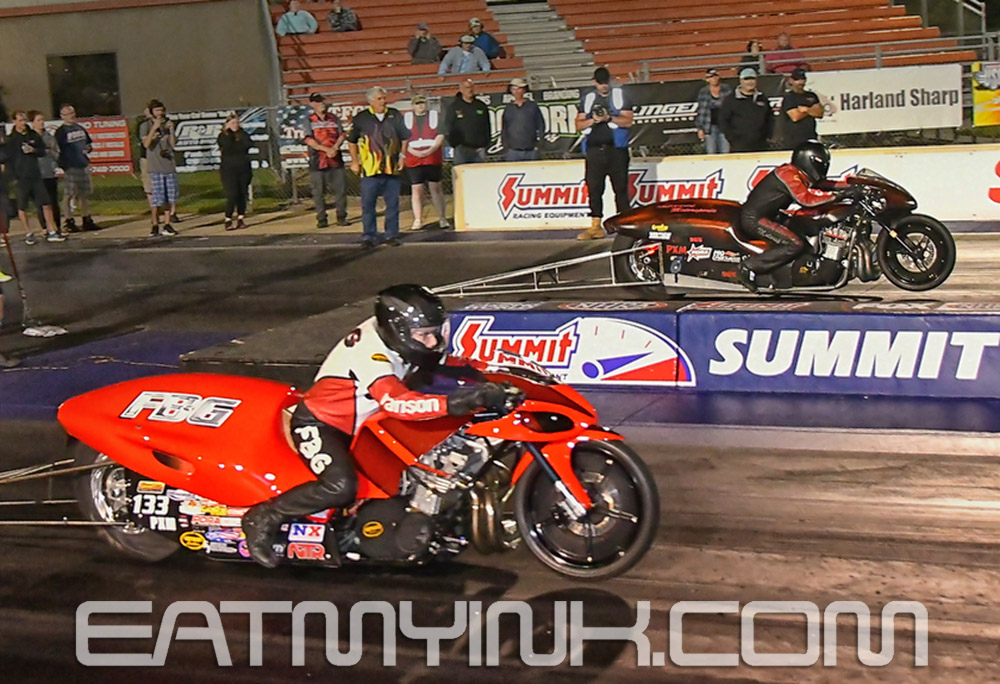 Motorcycle drag racing septuagenarian Paul Gast put together a streak of 3-second passes aboard his Fast By Gast Suzuki to pick up the win in his first Pro Nitrous Motorcycle appearance of the season at PDRA’s DeCerbo Construction American Doorslammer Challenge presented by Callies at Summit Motorsports Park. Other than a 4.00 in the first qualifying session, Gast dipped into the 3s on every pass, including a 3.998 at 177.67 in the final round. He defeated McKinney Motorsports pilot/tuner Ashley Owens, who ran a 4.026 at 176.19.

“Running in the 3s every run was a big deal,” said Gast, who thanked all of the employees at Fast By Gast. “The bike’s really fast. We pushed it pretty good out here, especially for the air conditions, but we didn’t push it to the limit of what it might’ve been able to do. I’m just pleased it ran in the 3s, pretty deep down in there. The bike was fast and it deserved to win the race. I was along for the ride. I finally did good in the final.”

Owens qualified No. 4 on his McKinney Motorsports entry before running a 4.038 at 175.75 on a first-round single, as teammate Eric McKinney wasn’t able to make the call due to mechanical damage sustained on Saturday morning’s final qualifying session. Owens then improved slightly to a 4.035 at 174.19 to beat another Kuwaiti—Meshal Al-Saber—and his 4.06 in the semis.

Points leader and defending world champion Chris Garner-Jones was the only Pro Nitrous Motorcycle rider to dip into the 3-second zone during Friday’s lone qualifying session, and was the provisional No. 1 qualifier on the strength of his 3.988 at 178.33 aboard his T.T. Jones Racing Hayabusa.

“It was bittersweet,” Garner-Jones said. “We did make a good run, especially after the [4.05 at 178] run we made [in Thursday testing], but we hurt it right at the finishline. But I feel good. We just freshened it up with new pistons and rings. We should go a little faster tomorrow, especially if the weather’s good.”

But it was Gast who was faster on Saturday, taking over number one and collecting the win while Garner-Jones lost to Al-Saber in round 1.