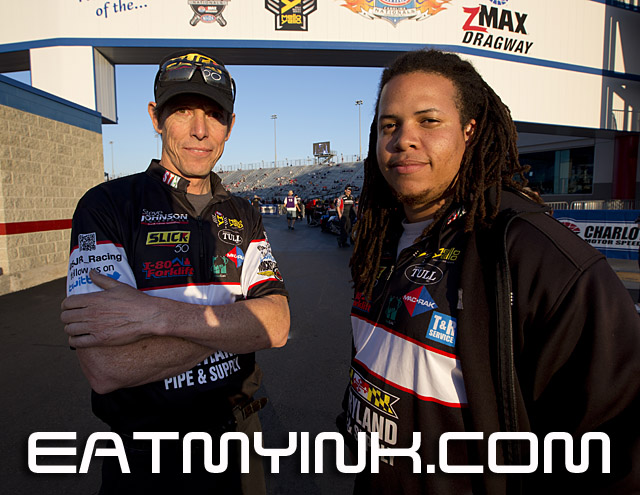 Steve Johnson’s Suzuki TL fairing was already fastened and taped up for the Pro Stock Motorcycle final at the NHRA 4-Wides at zMAX Dragway when smoke starting rolling out from the bottom of the bike. According to Johnson’s crew chief Ervin “Jock” Allen, a battery had caught fire. A hole had rubbed through the cover and the battery was touching metal.

“We were supposed to be going up right then but we had to snatch all that stuff off,” said Jock.”By the time we got the body off, it was just starting to flame. I just reached in and grabbed it and snatched it out of there.

“I remained cool, got everybody back calm and relaxed. Made sure we went over everything again and didn’t forget the checklist.” Another battery was installed, the fairing re-taped, and the final was won.

It was the second smoke incident of the weekend for Johnson and the Suzuki, after they were backed off the starting line with oil on the header in Q2. At that time there was speculation that the bike was having a battery fire.

Here’s a video of that, which also shows Karen Stoffer’s wild ride that round:

After the win Johnson, stuck around zMAX for testing along with Jianna Salinas and others. Eatmyink will follow up on results.