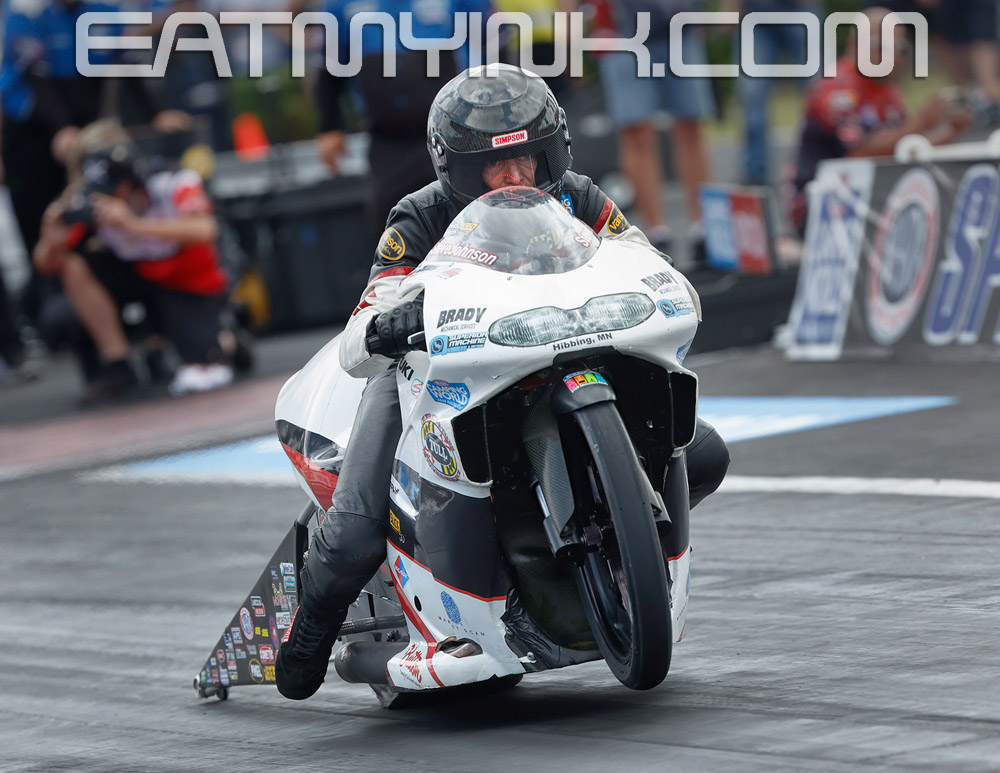 On her birthday weekend, Karen Stoffer came into raceday in Houston as Pro Stock Motorcycle number one qualifier, but Steve Johnson blew out all the candles and scored the win on his Monster 4-valve Suzuki.

Johnson’s win at the last NHRA race ever at Houston Raceway Park was his first of the season, going 6.720 at 199.91 to beat longtime rival and defending world champ Matt Smith in the final.

Johnson and his small team were spot on throughout eliminations, making the quickest run in Houston history in the opening round and then setting both ends of the track record a round later with a pass of 6.711 at 201.55.

He knocked off Eddie Krawiec to advance to the final, where we all got a surprise when Smith parked his Suzuki and rolled his championship-winning Buell off the trailer and to the ready line.

Smith advanced to the final round for the first time this season and the 66th time in his career thanks to round wins against Kelly Clontz, Chris Bostick and Stoffer.

But after the semifinal win against Stoffer, Smith noted in his top end interview that his Suzuki was wounded. “I don?t know what’s wrong with it, but it’s getting slower every round,” said Matt, confident that problem wasn’t his tuning.

So with no runs and no data, Smith switched to the Buell. “We know he’s got some cajónes,”  NHRA announcer Alan Reinhart said about Smith and the switch. It was indeed a ballsy gamble, but Matt knew his only chance against Johnson on this day was to roll the dice on the Buell.

Matthew took the tree by .015 and incredibly ran his best pass of the day, a 6.811 at 200.47. So a great move, but no Wally. That honor belonged to Johnson for his 10th career win, first at Houston Raceway Park, and a chance to sling barbs at his “professional” rival—as you’ll see in this video:

“A win like this all starts back at the shop,” said Johnson. “This is a huge accomplishment for us.”

“We didn’t run well at Gainesville. I really felt like I had a good bike, but we couldn’t show it. It was a huge setback for our team, so to come here and get a win was big. It’s nice to get a win early in the season and this race is also so special to us because it’s where I got my first sponsor. There are a lot of good memories here.”

“We had a smooth day,” said Johnson crew chief Ervin “Jock” Allen. “We really had to make up from the performance in Gainesville. We were better prepared.”

Stoffer and her record-setting White Alligator Racing (WAR) Suzuki were the class of the field through qualifying before struggling with sudden and severe handling issues on raceday that eventually sent her over the centerline against Smith in the semis.

Here’s a video of her wild second round win against Angelle Sampey:

WAR tuner Tim Kulungian was at a loss to explain what was going on with Stoffer’s bike but vowed to figure it out before the Charlotte race this coming weekend.

Kulungian and the team had 4.60 star Chase Van Sant of Trick-Tools Racing on hand at Houston over the weekend—learning, helping, and soaking in the PSM routine.

“Pretty crazy to be around the people you’ve looked up to forever!” said Van Sant.

And the team was enjoying a performance that demanded looking up to on Friday (6.775 at 199.64 mph in Friday’s one and only session) and Saturday for number 1 qualifier.

“Gainesville seems like it was forever ago,” Stoffer said on Friday. “So you’re definitely wondering if you can continue that momentum. But we were excited about putting together another good pass. I think there’s more out there and there’s definitely going to be a lot of competition, but I hope it holds. It was fun and I?m just having such a blast on that bike. It’s just so fun to ride and it’s going so smooth and so straight and so fast. I’m just having a good time with it.”

Those quotes make her raceday struggles all the more head-scratching.

After taking the provisional No. 1 on Friday, 2X Houston winner Stoffer was quicker to close out qualifying on Saturday, going 6.738 at 200.35 to record her sixth career No. 1 qualifier. Here quotes at the end of the day were similar to Friday’s.

“I’m just grateful and happy. It’s a happy bike and it’s so much fun to ride,” Stoffer said. “I’m so blessed and thankful to be able to ride it all the time.

“Houston has always been a special place to me. It’s where I won my first-ever national event and it’s very cool to wear the No. 1 hat here. I’m grateful every time the bike goes a little faster and it is truly a fun bike to ride. It’s only the second race (of the season), so there’s a big road in front of us, but I’m definitely enjoying every moment we have like this.”

Angie Smith’s drop down the qualifying order previewed (but was completely unrelated to) her raceday, which saw her Buell’s transmission lock up after her burnout.

story by Tim Hailey with photo and video courtesy of NHRA