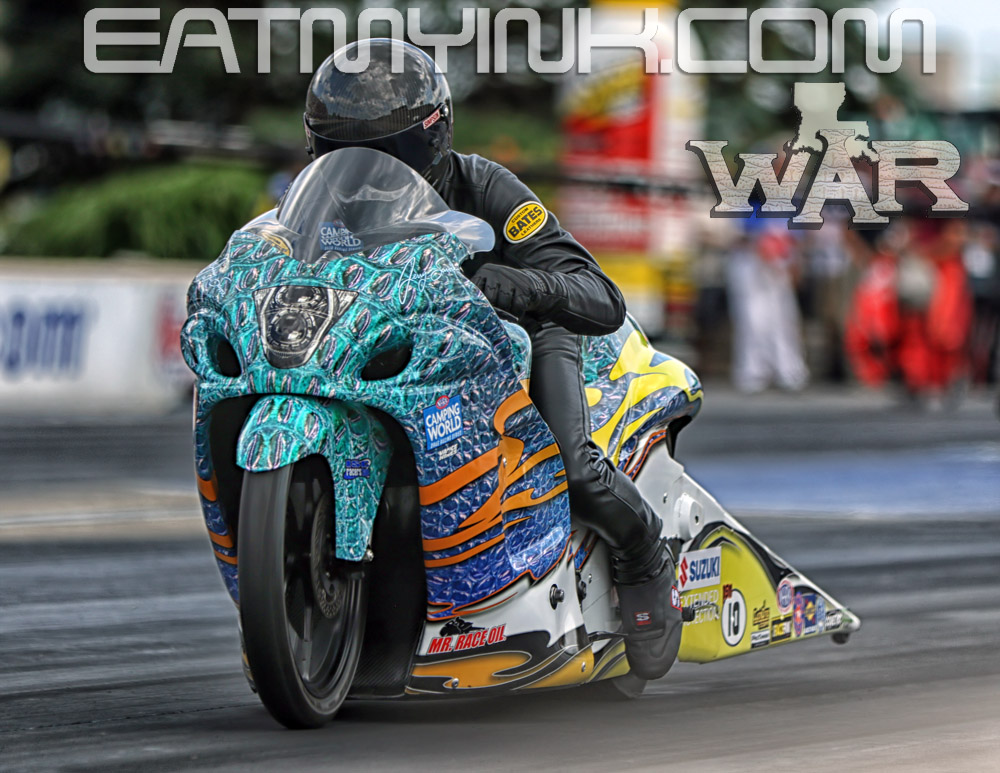 This time last season, the White Alligator Racing NHRA Pro Stock Motorcycle team was so focussed on delivering their Gen2 Hayabusa bodies to Suzuki teams, that they didn’t even have time or availability to mount one on their own bikes. Team boss Jerry Savoie decided that his customers came first, and he’d get a body on his bike once they were all taken care of.

Savoie did eventually get his ‘Busa body, pictured in the featured photo above. Teammate Karen Stoffer actually prefers the how the TL1000 body fits her and how she fits quite neatly into the TL body.

Stoffer ran a 2 valve motor much of last season, but when Hurricane Ida cut Savoie’s season short, she got his 4 valve motor to use and finished the season with the quickest motorcycle in the raceday field.

So the WAR team of Savoie and Stoffer has much to look forward to in 2022, including a lot more 4Vs at their disposal than they had last year, and a new marketing partnership with Bruce Van Sant’s Trick-Tools.

Veteran racer Van Sant started the Trick-Tools business to fund his own Pro Mod Motorcycle racing career, but the business and a growing family completely took over. Now his son Chase has taken up the sport and made quite a name for himself racing 4.60. Bruce is seeking to expand his company’s exposure to NHRA teams and fans, and has selected WAR as the vehicle.

“We are very excited to be working with the WAR racing team,” said Van Sant. “Their performance and professional approach to the sport are a great match for our company. We are looking forward to seeing how this season goes and hope our involvement can help propel them to another championship year.”

Savoie won the championship in 2016 during a particularly thriving period for the team. He annually talks about retiring from racing, and this year is no different. He also makes it clear that he would like to win another championship. With a very competitive teammate in a very competitive class and a new sponsor to please, WAR tuner/manager Tim Kulungian might be feeling some added pressure to show results sooner than his usual routine fosters.

WAR‘s season has traditionally followed Kulungian’s process on any given race weekend—start slow and build methodically to a strong finish. “There was just kind of this bell curve in early, early WAR days—we always did a terrible job in the first three or four races of the season,” said Kulungian. “And then around Englishtown—when it existed—we’d kind of get going a little bit, and our team would kind of build a little bit more momentum.

“So we’ve worked really hard on on being better right out of the gate. And that means implementing more things that we know works instead of banking on these R&D projects that kind of had us struggling for three or four races. Once we did get them working, it really worked well. But I think coming off on a better foot is helpful for the team.”

It’s been an erratic two seasons for everyone, with 2021 being nearly as truncated for WAR as ’20 because of Hurricane Ida’s effect on Savoie’s Southern Louisiana business and home.

The end product of Savoie’s alligator farming is the luxury goods market—hit hard by reduced travel in the COVID era. Now, just as things get back to normal, Russia’s invasion of Ukraine once again has travelers sticking close to home rather than engaging in overseas shopping.

But being back at the track and making test hits this week has been good for Savoie. “It feels good,” said Jerry, claiming no rusty effects from the extended time off after his Ida-shortened season.

The WAR trailer is stocked this weekend with pounds of meat hunted at Savoie’s big game ranch in Mexico, but Jerry claims that he and the team could—and might—drop 20 pounds off the bikes and go back to their 2V program. “Our two valve program was very, very strong,” said Savoie. “Sometimes I think it’s better to go back to something we knew inside and out”…..and now with 20 pounds less than the 4V competition.

And indeed, in the midst of Stoffer’s strong finish (three straight finals with the quickest bike in all three), Kulungian pointed to a 2V motor on the trailer floor and said “See that? That’s just as strong as our 4 valve.

“The 10 pounds (added to 4V Suzukis during the off-season by NHRA) is  really, in my opinion, unnecessary. It’s it’s a very heavy motorcycle, and I don’t think that the Suzukis have earned the 10 pounds.

“When you look at those last three races with Karen. We didn’t run any kind of stellar back-half that just knocked our competition off the block, we just managed things better than our competition. It just comes down to our engine program, and some of the things we’re doing with gear ratio, injectors, and throttle bodies. I mean, just the whole package.”

Managing that package involves an increasingly complex array of sensors speaking to upgraded ECU firmware. This is what caused problems on Savoie’s bike on several occasions last season, and where the team is focussing their attention right now. “We know that if we’re not working, we’re falling back behind because obviously our competition continues to work.”

Like many, WAR has had to deal with supply chain issues—especially when trying to replace a wiring harness on Jerry’s bike. “We design our own harnesses, but we don’t build them. We hire an engineer to design them, and then it’s sent off to Motec to build our harnesses. Back in November, I called Motec, and usually they are done with them in like, four to six weeks. And they said, ‘Well, we could have it wrapped up by May or June.’ And I’m like, ‘Dude, I gotta race in March!’

“Pre-twisted CAN wire is just, like, nobody has it. Just the yellow and green can wire. You know, these motorcycles have a CAN bus, on which you can have your air-fuel ratio sensor, shiftlight, just different things, on your CAN bus. It’s kind of daisy chained with these two wire sensors, and it’s got to be twisted so many times per inch. So now since you can’t get that, somebody has to take yellow and green wire and hand twist it, which is a lot more labor intensive.

“I called Richard Freeman and he said ‘What do you need, Dickhead?’ He sent me to Justin over over at Modern Racing, and they knocked it out in like four weeks. They really, really saved the day for us.

“We do have some things on Jerry’s bike that are absolutely brand new, a very different way of approaching a lot of solutions that play a big role in how successful we can be,” Kulungian said last week. “I think everything we’re doing really makes sense, it’s just a matter of getting everything to work properly and work together. The question mark is, how long will this take? Certainly it will pay dividends in time.”

Testing this week revealed that the time is still not now, that the new systems are still not working together as they should. Now with rain-shortened qualifying at Gainesville, Jerry’s bike will go back to the same system that clearly works very well on Karen’s.

The rain delayed first round of qualifying was scheduled for 10:00 am today, but further delayed by rain. Stay close to the Eatmyink Facebook Group for results as they happen.