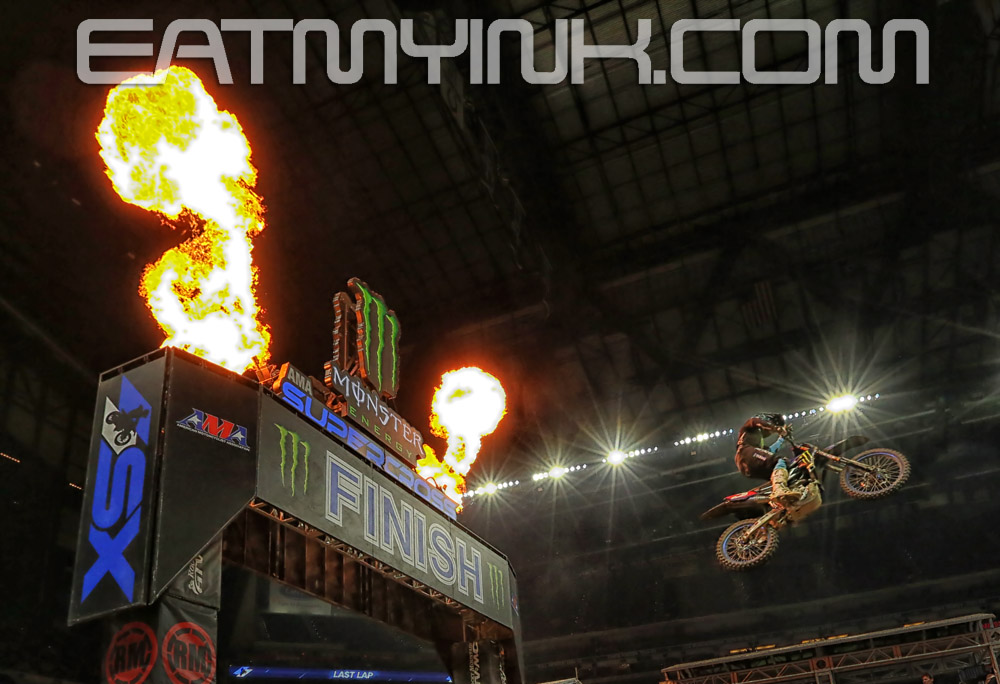 After five hours of carrying two camera bodies, three heavy lenses, a flash, and a large cup of coffee up, down and all around Indy’s Lucas Oil Stadium, I have a whole new respect for beer vendors.

And although all this clamoring and photo strategizing often kept me from seeing 80% of the track and following exactly what was going on in the competition, I came away with two affirmations of what I pretty much already knew: Eli’s Tomac’s strength and stamina are unmatched by his competitors; and fans LOVE Jett Lawrence.

At the end of the night, I was damned pleased with the results of my first time shooting Supercross (my previous credential was journalist in the Press Box) and slept very, very well.

The fact that two points leaders extended their win streaks doesn’t tell the story of what was a great night of racing.

Take Lawrence’s night. He crashed hard AF in the first turn of his heat race, falling nearly to the very back of the field. That just gave the Indianapolis crowd the chance to whip themselves into a frenzy watching the 19 year-old Australian annihilate the field.

Early heat leader Pierce Brown flung himself over his GASGAS’ handlebars with about 2 minutes left. Kyle Chisholm inherited the lead from Brown, and Lawrence moved into second with two laps left as the clock ran down. That was one lap too many for Chisholm and his Star Yamaha, as Lawrence and his Honda blew past just after the finishline jump on the final lap. I wish I’d had my GoPro strapped to the back of my head as the crowd went apeshit berserk.

Pro Circuit Kawasaki’s Cameron McAdoo, who currently sits second in the 250SX Eastern Regional Championship points standings and won his heat earlier—which included some fisticuffs. McAdoo entered the weekend action hoping to place more pressure on the points leader and keep his championship fight alive, and started the day on the top of the leaderboard in the first 250SX qualifying session after recording a 44.786 lap time.

A battle between the Kawasaki and Honda was set in the 250 Main. Lawrence snatched the holeshot but looked uncomfortable in the whoops and inconsistent in some of the rhythms, while McAdoo was on his game.

Two and a half minutes into the 15-minute plus one lap race, McAdoo closed and I positioned myself to take what I thought was the pass for the win. Exactly where I expected it, McAdoo pushed past Lawrence and into the lead.

But Lawrence found his flow and took the battle back to McAdoo. At the race’s midpoint Lawrence re-gained the lead and slowly stretched it from there to capture his third win in a row, his fourth in five rounds of the division’s championship.

“Overall, we had another solid weekend,” said McAdoo. “I was feeling really good in practice and enjoyed the track a lot all day. It felt nice getting my first heat race win of the season and battling for the main event lead.

“The track was super tight and developed deep ruts as the night went on, which I think was a benefit for me as I was able to use my experience on rough tracks to make the pass for the lead.

“Unfortunately, I missed my line going through the whoops one too many times while trying to cut through lapped traffic and got passed back. The good news is, we still finished second and are in the title fight. Now it’s time to let the west coast guys race next weekend before we come out swinging in full force at St. Louis.”

Behind them, Brown reached third place but Rockstar Energy Husqvarna Factory Racing’s RJ Hampshire pushed past late into the race. The two were nearly side-by-side at the checkered but Hampshire held on for his first podium of the 2022 season.

In the early laps it looked like Tomac would slice his way to the front as he dove under Stewart, but Tomac’s forward progress stalled as the top five battled fiercely in a tight pack. As Anderson fought with Barcia, Stewart came back on Tomac to reclaim his spot.

Barcia got off-plane in the whoops and Anderson took over the lead seven and a half minutes into the 20-minute plus one lap race. Less than a lap later Barcia cut across a tight right hand turn into Anderson. The riders collided, Anderson went down, and dropped outside of the top five. Barcia was later penalized 3 points and $3000.

As Tomac got his turn to hound Barcia for the lead he found Musquin nipping at his own rear wheel. The top three riders fought for position, battled the deteriorating track, and strategized passes on lapped riders with only two seconds separating all three positions. When Stewart and Team Honda HRC’s Chase Sexton closed in, there were suddenly five riders with less than five seconds separating the group.

With just under five minutes left on the race clock, Tomac jumped past Barcia and quickly pulled clear from a retaliation pass. Soon after, Stewart crashed hard, going over the bars after shorting a jump in the rhythm section.

As Barcia made a final push to get Tomac, Red Bull KTM’s Cooper Webb did all he could to pass Sexton for fourth. At the checkered flag Tomac took the win, his fourth in a row. Barcia was right behind in second, Musquin was comfortable in third, and Sexton held off Webb at the line for fourth.

Tomac’s patient and precise victory on the soft, rutted, and unforgiving Indianapolis dirt at round 11 of the 2022 Monster Energy AMA Supercross series stretched his championship points lead to 48 and places him one win away from fourth on the all-time win list.

The series now crosses the country to match the racers up again next Saturday night at Lumen Field in Seattle, Washington. The open air stadium looks, as of press time, to have clear weather for a round that has played spoiler to many racers over the years when rain mixed with Pacific Northwest soil to create DNF-inducing mud.

The round also brings the return of Western Regional 250SX Class racing for Round 7 of that division and Round 12 of the premier 450SX Class.