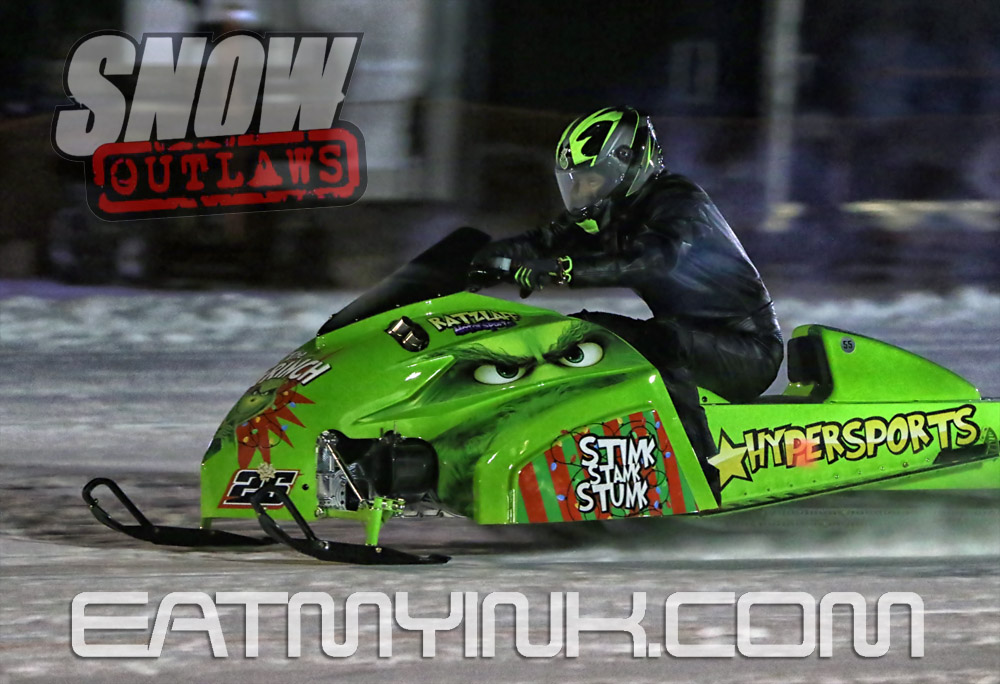 Taking a radical new build from completion to the winners’ circle rarely happens right off the bat in motorsports, yet that’s exactly what did happen at the Snow Outlaws Winter Nationals presented by Rice Lake Tourism.

On Friday night, fans saw three rounds of Pro Outlaw qualifying beneath the lights, and relative newcomer Jeremy Teasley nailed down the number one spot with a 3.48 at 152 mph on Chris Connelly’s Jeremy Hannen-tuned, turbo-alcohol HRC-4 “Problem Solver.” Teasley is a well-known motorcycle drag racer that made his snowmobile debut at last year’s Snow Outlaws finals, going all the way to the final round before losing a photo finish.

Teasley didn’t make it that far this time around, as his reward for number one qualifier on Friday was a round one pairing with “The Grinch” on Saturday. The Grinch is a brand new, screw-supercharged, nitro-powered sled designed, assembled, and dyno-tested by Craig Campton of Hypersports. Jeff and Kim Ratzlaff are the owners, Howard Haack and Jeff Ratzlaff jointly tune it, and Mike Allen rides the beast.

“We started designing the ScrewCharger-specific chassis and the blower drive components in early April,” said Campton. “We did the engine build in October and began assembling the chassis in early December. Besides several days of dynoing, there was no time for actual testing. The first time the sled moved under its own power was Q1 Friday night in Rice Lake.”

But when The Grinch out-60 footed Teasley in round one and took the stripe, it already looked like a well-sorted machine. And while Campton said the team wasn’t ready to talk nitro percentages, the word in the pits was the sled started with 30% on Friday and was up to 40 by the end of the event. Which means that despite solenoid problems and torching the head and cylinder with 50 feet left in the final round, there’s gobs more performance left to be found in The Grinch, which recorded a low ET of 3.47 (Matt Luke set high MPH at 163.72.)

“So far the only changes from our turbo engine package have been the compression ratio and the injectors,” said Campton. “I suspect that there will be some revisions as we increase the percentage of nitro and gain more knowledge.”

The win was also a big deal for rider Mike Allen, making his first race since a big, top-end crash a few seasons ago. Allen took the final round win when Kelly Shilts redlit on the Chad and Jenny Nyhus-owned ProCharged, nitro “John Deere” sled.

Defending Outlaw champion Dominic Ernst lost to Alec Gibas in round one.

Twenty year-old Gibas fell to Allen in the Outlaw semis riding the “Spiderman” HRC-4, but took “The Grim Reaper” HRC-2 all the way to the winners’ circle in Pro Xtreme 55. Gibas beat Corey Sullivan by inches in the ProX-55 final.

“Last year, I was driving The Grim Reaper in Outlaw, but it has been rebuilt over the off-season to compete in ProX-55,” said Gibas. His G-Force racing team picked up Spiderman only three days before the Rice Lake event, unloading at the track Friday night for its first run in Outlaw qualifying.

“Friday night felt like a great success for the team, and it gave me a lot of confidence as I ran six strong passes (on the two sleds),” continued Gibas. “Even with losing in the Outlaw semifinals, the first weekend out with Spiderman felt like a huge success.

In the ProX-55 class, Gibas’ Grim Reaper made a run to the finals despite “Blowing the belt through the flags in rounds one and two, to my seat backer almost coming off in round three. G-Force as a team was able to run through the checkered flag against one of the best at the track—Corey Sullivan.

“Special thank you to Chase Miller from Hypersports for helping in the trailer this weekend and noticing my seat almost coming off, and running to fix it by the time I got in the trailer.

“While G-Force did start with just my father and I, along the way there were so many people that truly brought me to where I am today. First, I would like to thank Glenn Hall. Over time, Glenn would introduce us to Craig Campton, who built my first Hypersports sled. This was a huge game-changer, as no sled runs the track like the machines built by Hypersports, and I’m so fortunate to drive one.

“My dad always loved engines and one of his close friends, Bruce from Route 12 Arctic Cat, has helped us build our sleds in the past and continues to be an incredible support system in the trailer wherever necessary. He connected us with Joe Palmierii. Last year, Joe became our tuner, and his understanding for tuning these machines is truly incredible. I always say, the competition is inside the trailer, as for the most part the Hypersports sleds are the same, so bringing Joe into the trailer allowed G-Force to commit to compete. The Geiger Brothers, Tyler and Trevor, joined us last year as well and have been helping in the trailer, as well as being the first face I see at the finishline after racing when I get towed back.

“This past weekend in Rice Lake I had so many people around me and, of course, it was the first Snow Outlaws event of the year, coming off a frustrating end to my last season. Everybody in the trailer this weekend shared the same passion. We truly are a team and the energy of being in the subarctic with the people closest to me on that lake is one of the greatest feelings.

“Lastly, thank you Chad and Jenny Nyhus, the Snow Outlaws crew, and sponsors for all you guys do and your endless effort to build and host a world class racing event. Your long hours of work—so that all of us drivers can run fast and safe—is unmatched.”

Fourth generation racer Kyle Shilts took the Pro Mod win when final round opponent Josh Bormann left before the starter’s flashlight was even on. “The final was crazy!” said Shilts. “So I’m on the launch control watching the starter try to turn the light on, and he looked to be struggling. My opponent took off before the light came on, which means I won. But I was still focused somewhat and got thrown off by my opponent jumping that I ended up jumping shortly after, but still won because I jumped second. Not the way we want to win but we will take it.”

Not that the whole event was an easy path to the win for Shilts, as he faced some close finishes along the way. “My first race of the day was real close (against Lance Flathers) and the semifinal (vs. Casey Rosenbrook) was just as close if not even closer, but I could still tell I was ahead at the finish both times.

“Our Pro Mod we call Thumper #2, as this is our second Pro Mod. It’s a Proline chassis powered by a stock three cylinder 4-stroke Yamaha engine that was refreshed by my main sponsor Bikeman Performance. This Pro Mod leaves the starting lines as quick as it does only because of the crazy earth-gripping studs we get from our amazing traction sponsor Studboy! The sled has had a lot of wins and we only hope to continue on with that!

“At this day and age, the racing is all about having fun, win or lose. This weekend, getting the big Pro Mod win was icing on the cake, but it didn’t need to be as my goal was to place in the top 5. These Pro Mods are crazy fast and there is no room for error in such a tight field! I was happy I held my own and got it done in the final for my team and sponsors.

“I had the most fun that I’ve had in a long time at this event because I had great crew members there helping! My main pitman Ryan was a huge help. We couldn’t have got the W without him. Big thanks to my dad, our team, and all our amazing sponsors as we couldn’t do this without their help and support. My dad is the one who makes that sled run like it does so without him, that sled would not perform like it does.”

Performing is something the whole Snow Outlaws staff and racing family does very well, with each round of testing, qualifying, and eliminations running precisely on schedule.

Chad and Jenny Nyhus, and the Snow Outlaws family reconvene February 18th and 19th for the Pioneer / Long Lake Shootout at N1690 County Highway M in Sarona, Wisconsin. Do not miss it!

story and photos by Tim Hailey, except for damaged motor shots courtesy of Craig Campton