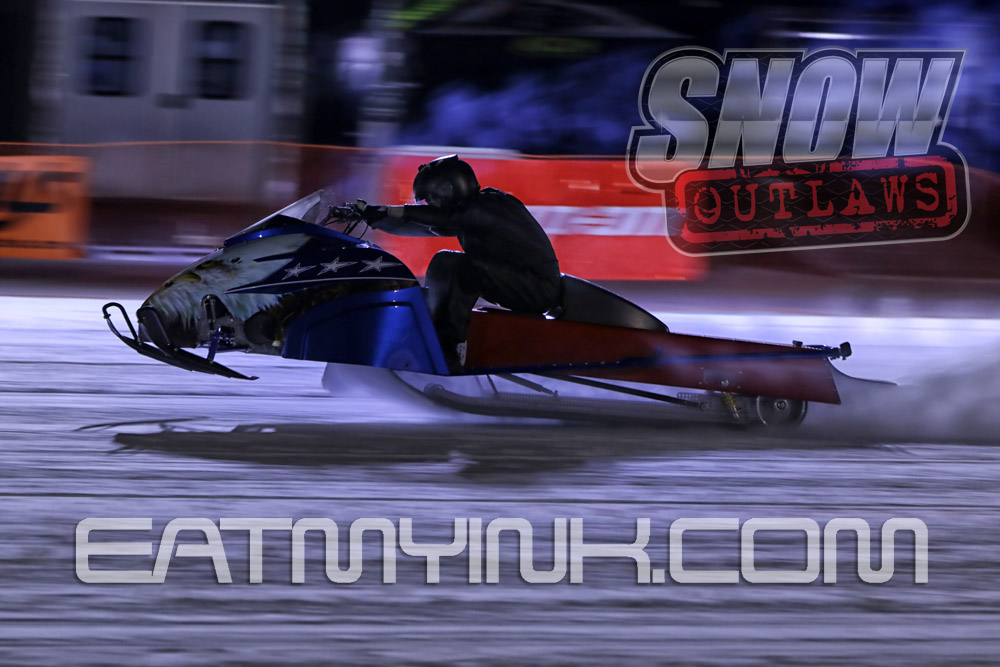 And with the finals run under the cloak of darkness, Rice Lake Pro Outlaw winner Mike Allen lit up the night sky when the Jeff and Kim Ratzlaff-ownerd“The Grinch” that he rides torched the cylinder head for the second time in two final round appearances.

“It already happened once in the finals at Rice Lake (with the win in hand), but it was during the daylight so not much for pictures,” said Allen, whose team is learning what the screw-supercharged, nitro-powered sled wants. “At Sarona the pictures make it look way worse than it actually was. It happened very quick.”

In the other lane, defending Pro Outlaw champion Dominic Ernst was already not looking back, and streaked to the win on the Eagle 1—dramatically improving his chances of repeating his championship.

“It was definitely a tough weekend for sure,” said Ernst, a Clinton, Iowa electrician on weekdays. “Friday starting off, everyone was facing the challenges of high 46 mph winds, so unfortunately we couldn’t run Friday. But the Snow Outlaw crew came together and put out a perfect schedule for Saturday.

“Once Saturday rolled around, we had confidence we were ready. But we unfortunately faced a couple of issues with the clutch not engaging and the sled wasn’t taking off right. For elimination rounds, the team came together, overcame the problems, and were able to make some passes down the track and pull off the win.”

Ernst pulled a close one out in round 1 against Aaron Casler, who was on a run before apparently shredding a belt and crossing the strip with a 3.72 at only 133 mph. In the other lane, the Eagle 1 was sluggish at the start. before laying down a 3.79 at 160.41 for the holeshot win. “My sled wasn’t running correctly,” reported Ernst. “It was dropping one of the cylinders for about 40 feet, then the sled started to run. So we replaced a spark plug and it worked.”

“It’s truly an honor to be on the team, and huge thank you to Chad and Jenny Nyhus for giving me the opportunity to race their sled,” said Ernst. “Thank you also to Glenn Hall for everything he does. That man puts hours and hours of tuning on the sled, making sure it’s tip-top shape.

“Thank you to my dad (Matt Ernst) and Eric Fasnacht for going to the race with me, helping out every step of the way with mechanical work, and help finding that right spot on the track. Thank you to my teammate Kelly Shilts for helping out and being the best teammate anyone could ask for.

“Thank you to Craig Campton for building one heck of a machine and thank you to my family back home for all the love and support. Thank you to all the Snow Outlaw crew for all the hard work they put into the sport to make sure us racers have the best, safest, fastest track to race on.

“Great job to all the other teams racing and can’t wait to see them at the next race in Cable, Wisconsin March 4th and 5th. Thank you to the sponsors Hypersports and Nyhus Erectors.”

“First round of testing was the first time that sled has ever been down the track,” said Ausloos, echoing The Grinch’s debut success at Rice Lake.

“First pass we couldn’t get ahold of the belt, but the second and third pass were solid, full passes.

“Felt pretty good going into the first round of racing against (Chris) Homrich. Sled left great and the new Hypersports Snow Sharks were really putting the power to the snow.

“Second round was against (Alec) Gibas,who won the last race, so we knew he was fast. Once again our sled left the line great and stayed out on him to the stripe.

“Third race against (Jesse) Bruns, I did not get a good light but was able to drive around him.

“In the final against Sullivan, we left at the same time and 60 footed close to the same, but our sled pulled a couple sled lengths from 100 feet to the stripe.

“I’d like to thank Hypersports for the work put in last week and Glenn Hall for the dyno work. Great track built by the Snow Outlaws group.

Snow Outlaws kingpin Chad Nyhus is now two for two as a Snow Outlaws rider, taking the Pro Mod win while racing past Geoff Mapstone in the final. Syracuse 2-stroke racer Mapstone is also the same rider that Nyhus beat that other time two years ago. “I thought that was crazy!” said Nyhus.

“I can’t say enough about the sled (Dirty Allis). I mean, Glen Hall was tuning and the thing made just stellar passes every round.”

Dirty Allis is an homage to tractor-maker Allis-Chalmers—a stock turbo 3 cylinder Yamaha built by Hypersports and equipped with their Snow Sharks. Raised on a farm and now a steel erector, Nyhus names his sleds after American tractor manufacturers.

“Dirty Allis was a name that just stuck after we come up with it at Craig Campton’s shop and everybody just kept calling it Dirty Allis. It’s kind of a catchy name and the orange paint. white and black is easy colors to work with. It looks sharp.”

Dirt Allis debuted as a world record holder on the grass at Hay Days before hitting the snow with Nyhus in the seat at the Long Lake.

After a round 1 bye at Long Lake, Nyhus beat Rice Lake winner Kyle Shilts and Louis Goldbach on his way to the final.

Nyhus has mixed feelings about running the organization he races at, and winning. That might explain why he’s only raced twice. “I know when I got to the bar, I had a lot of haters,” laughed Chad. “This year we’ve got more sponsors than we ever had.”

Those sponsors including a lot of racers pitching in substantial sums of money. “I’m starting to believe they’re doing it because they don’t want to see me quit!”

Don’t do it Chad, you’ve got a great thing going here!

Chad and Jenny Nyhus, and the Snow Outlaws family reconvene March 4thand 5thfor the Wienie Roast/World Finals at Cable, Wisconsin. You, your snowmobile, and your wienie will not want to miss it!

story and photos (except where noted) by Tim Hailey