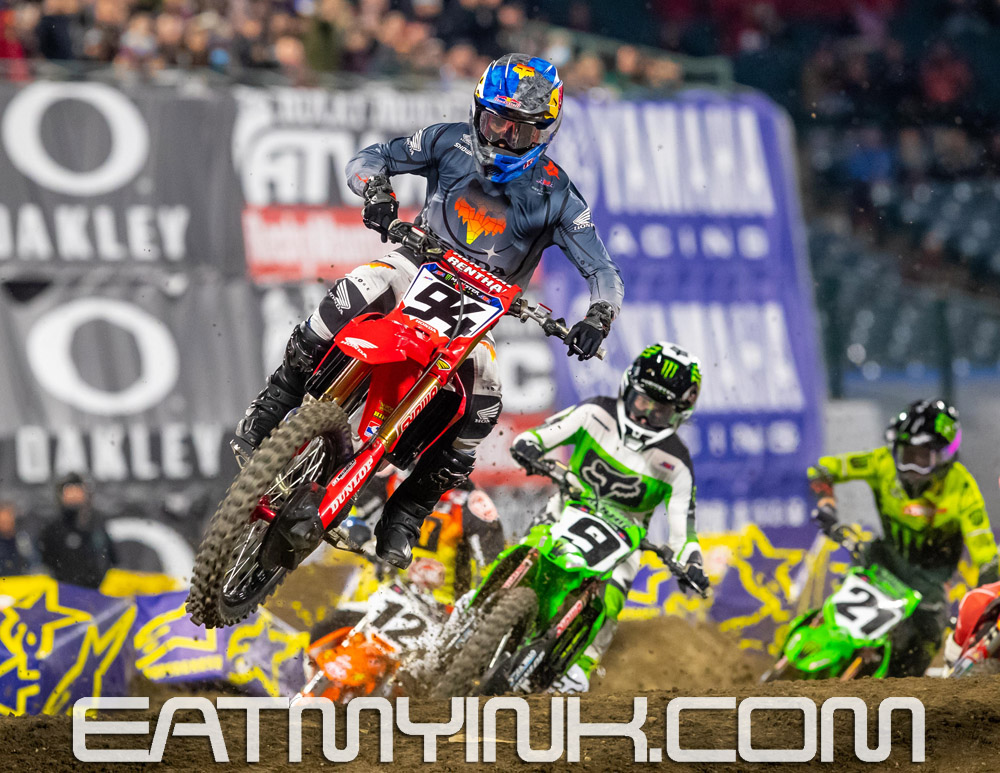 In the Western Regional 250SX class, Monster Energy Star Racing Yamaha’s Christian Craig turned a good race start into a great start to his season with his first win inside the stadium in which he grew up watching Monster Energy Supercross from the stands.

Team Honda HRC’s Chase Sexton grabbed the holeshot in the 450 Main Event, but his teammate Roczen was past him almost instantly. The two Honda riders quickly gapped the field (check for bottles yo!) by more than six seconds. Behind them, struggling with a pre-season shoulder injury, Monster Energy Kawasaki’s Adam Cianciarulo held third place with Barcia behind but not yet applying pressure.

The first eight minutes of the 20-minute plus one lap race were uneventful except for the Hondas impressive speed, but then things started to happen rapidly and dramatically. The Red Rocket teammates nearly made contact in mid-air; shortly after that Sexton got out of shape at the end of a rhythm lane and crashed entering a bowl turn. He recovered quickly but crashed harder a lap and a half later re-taking second place from Cianciarulo. The second crash dropped Sexton well outside of the top five.

Then Cooper Webb put on one of the late-race charges that’s he’s become known for, putting his KTM into second place with just over three minutes left on the clock. Amid the position changes up front, Chase Sexton climbed back as high as fourth before giving up the spot up to Red Bull KTM’s Marvin Musquin right at the checkered flag—after Musquin speared Malcolm Stewart, putting them both on the ground.

Eli Tomac and the Yamaha were never players, ending up in sixth.

So despite Roczen’s runaway win, it was an eventful start to the season. Time will tell if the red rider can keep it up or keep from getting injured this time around.

Christian Craig moved quickly from fourth to second, then made the move into the front spot less than four minutes into the 15-minute plus one lap race.

On the fifth lap Hammaker got past Friese with Muc-Off FXR ClubMX’s Garrett Marchbanks right behind. Seemingly still driven by revenge against the Kaw team that sent him packing, Marchbanks applied pressure several times for Hammaker spot.

On his last failed attempt, Hammaker either pooped out or lost track of his backside, and Team Honda HRC’s Hunter Lawrence got around and set sail for Hammaker. Lawrence put in the final attack for the spot, contacting Hammaker in the final corner. It was not enough to take the position as the Kawasaki hit the stripe without jumping, inches ahead of the flying Honda. Foreshadowing Roczen, Craig cruised for the win.

“It was a tough track and there were certain parts of the track you really had to focus on,” said Hammaker. “When I felt pressured, I told myself to make it clean through the whoops and pass the lappers clean. It feels amazing to get on the podium to start the season.”

Shimoda was nearly in step with his teammate Hammaker throughout the day. He qualified just behind him in fifth, while also taking a second during his heat race. While Hammaker was able to get past the dropped gate clean in the final, Shimoda found himself stuck and going down the start straight in last.

“The rider next to me flinched and it caused me to get stuck in the gate,” said Shimoda. “They were holding the gate a long time and I just made a mistake. I had a long race ahead of me, but I worked really hard to pass as many people as I could and stay up.”

Knowing his speed was there, Shimoda focused on picking off the riders in front of him and was inside the top 10 just after the halfway point. With just a few laps to go, he passed into seventh, where he would finish his night.

“Knowing it’s just the first round, I wanted to get all the points I could and I’m just 11 points back of the leader. We’ll be back next week.”

The 17-round 2022 Monster Energy AMA Supercross series lines up the racers every Saturday night with only one break in April for the holiday weekend. Round two invades RingCentral Coliseum in Oakland, California on January 15th.