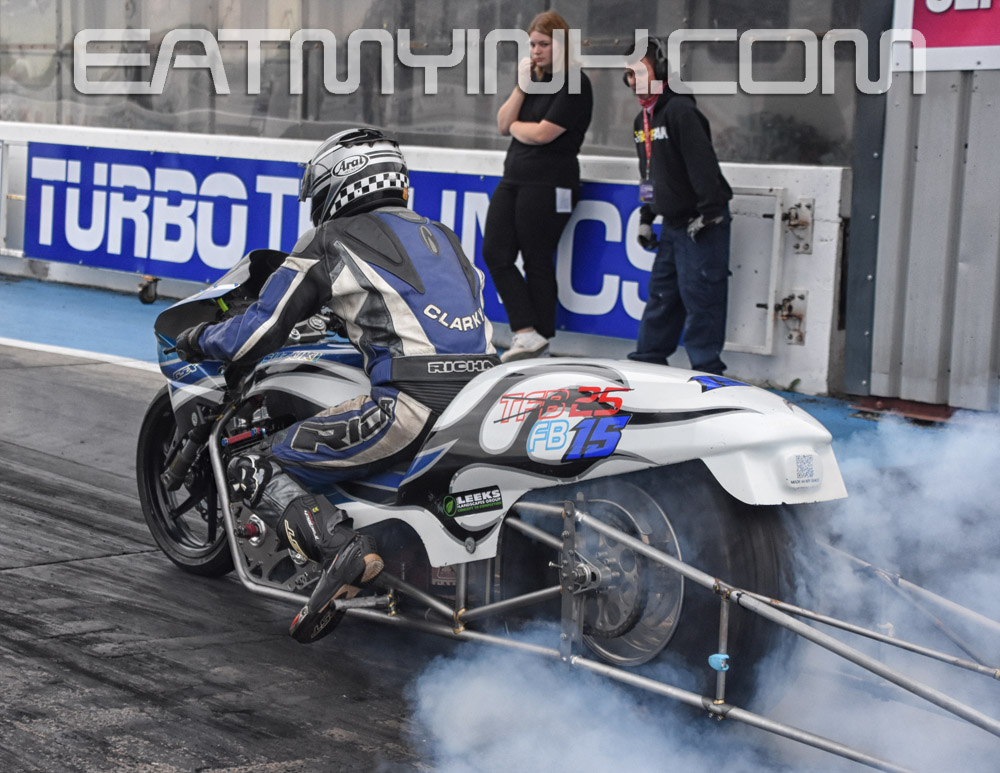 The weather forecast was not very good for the ACU Championships’ Green Light Nationals, so a lot of riders took the opportunity to do the test session on Friday. There were four qualifying sessions planned for Saturday, but rain meant only one session, which was not completed. Four classes did their qualifying on Sunday.

Rain disrupted eliminations and only a handful of classes got to race their finals.

With Stuart Crane not entered for this event, it was a chance for the rest of the Funnybike riders to close the points gap.

Jiri Lukes also had miss-fire problems off the start line and ran 10.998. Kevin Osman had his front forks fail and was out of the show.

Lorcan Parnell fitted a new rear tyre for the event and did a test run on Friday. Saturday morning, the team had to do a repair and missed the only qualifying session and was out the show.

Tony Clark had a bye to the final and ran 7.556 at a new personal best for both the bike and rider at 191.32 mph. In the other semi, Peters shot out the gate only to slow at mid-track. Lukes miss-fired off the start line and managed to pass Peters for the win.

It was all Clark in the final, taking the win 7.237 at another p/b speed of 192.97 for his first ACU Funnybike event win.  As for Lukes, he had a back fire from the carbs, which burnt some wiring. Jiri was ok.

Louis Davies and Jordan Kenway had their Saturday qualifying times cancelled because they were the only two Comp Bike riders to make a pass before rain ended the day.

Sean Mills was the number one qualifier (on Sunday) with a 7.57. Davies had a nitrous system fail and ran 8.9.  Chris Neary was next with a 9.49, and Kenway had a gearshift issue.

Davies put bigger jets in to attempt a 6 second pass in the final on his solo pass. He ran 7.066 with a personal best speed of 188.92 to extend his points lead.

Making his first appearance this season, Garry Bowe ran 7.20 sec in test session. Bowe is running Methanol for the first time and damaged his cylinder head, which put him out of the competition.

Steve Wood ran 8.190-175. Dave Smith has a new MoTeC ECU and was looking for a baseline, running 8.316. Outside the show Alex Hope, who spun his rear tyre off the start line and ran 10.545. Len Paget struggled to get off the start line, but ran his best speed to date with a 182.87 on the ex-Barry Henson bike. Ross Morrison broke on the start line with a launch problem.

Round 1 of eliminations and Morrison Jr drifted to the centreline at the finish and had to ease off. Smith almost beat him.

Alan Morrison was the 8.50 Bike number one qualifier with an 8.534, with reigning champion Jay Roe second at 8.641. Both Chris Reed and Steve Howe broke out during qualifying.

Rain fell in the final when the riders were about to do their burnouts.

There was a shock in round one when Head beat Wright 9.542 to 9.749, and Head had a bye to his first final.  Cordelle beat both Philip Harrison and Richard Sawatzki to reach the final.

Blade King knocked out Adams in round two of eliminations and Marsh beat King in the semi to reach his first final of the year. Pratt beat a red lighting Michael Gooding and Justin Malton to reach the final.

History was made during qualifying when Jedd Guy and Colin Millar came to the start line and ran the quickest and fastest side by side in Outlaw Anglia history. Guy went 7.099 with a personal best speed of 192.12 and Millar ran 7.175-192.24.

Round one and Guy got close to the centreline and eased off to an 8.315 and still managed to beat Kennedy.  Stone redlit against Millar. Taylor ran his best of the weekend with a 7.866 but lost to Webster’s 7.334-186.59.

Guy had a bye to the final and ran 7.134 with a p/b speed of 192.88. Millar got shutdown after his burnout due to a fuel leak and Webster got out of the groove on his run.

Rain fell while the cars were in the staging lanes for the final.

The final saw Clifford drift to the wall as Coulsell stormed down the track to take the winlight.