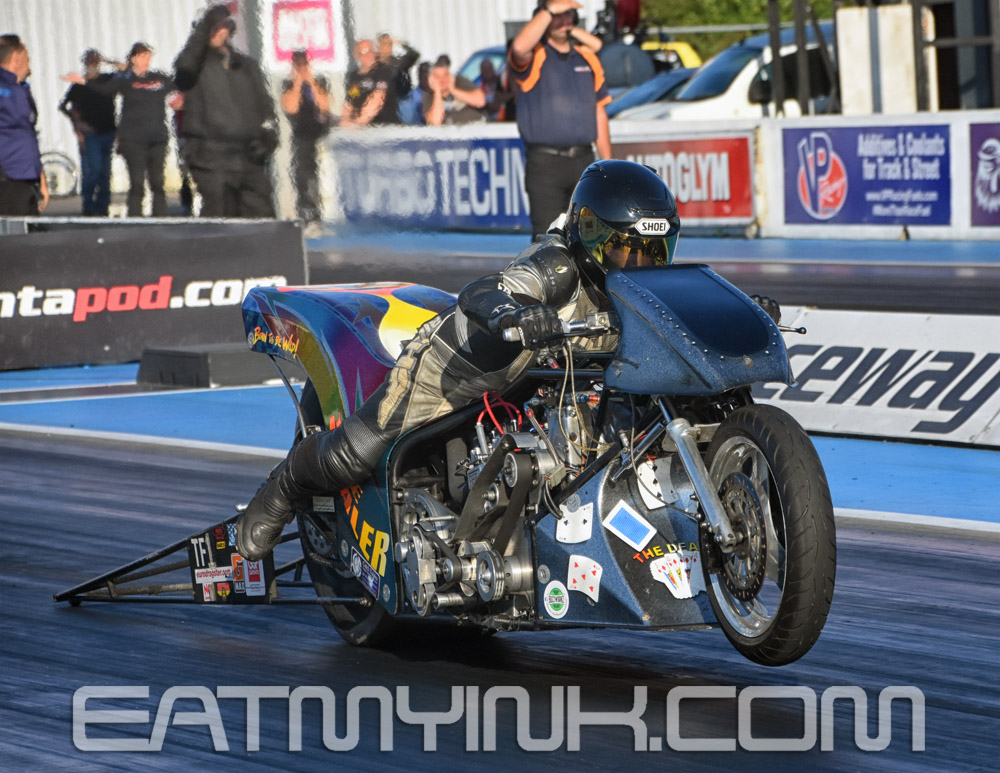 Multi-time and Reigning ACU Top Fuel Bike Champion Steve Woollatt (featured photo above) had a slim 20 point lead coming into the National Finals at Santa Pod, just ahead of Al Smith. Neil Midgley had a mathematical chance if Woollatt and Smith had problems. This was the closest the class was for a championship in a very long time, and it would go down to the final race to be decided.

Woollatt opened the session with 6.150 at 221.17 miles per hour. Smith had tested the day before the event and bent a con-rod. The team did the repairs and Smith ran a jaw dropping career personal best of 6.012 at 228.94 mph, which was quicker than the ACU ET record and faster than ACU Speed record. Smith needed to run quicker than 6.07 and 226 mph plus to set the records and more importantly, extra points for the championship. His second run was 6.096-225.89.

Midgley had an engine problem off the start line in Q1, and in the next session ran 6.435-200.58. At the end of qualifying, Smith had the lead in the points with low ET and speed, and number one qualifier.

The final was set anyone and could take the championship. The title was decided on the start line when Smith left on the stage light and Woollatt won his nineteenth(!) ACU Top Fuel Bike Championship.

Stuart Crane had the ACU Funny Bike Championship won and this meeting he was going to test a new billet cylinder head during the eliminations. Crane ran 6.627-196.19 out of the trailer and the next pass a clutch gear broke and parts hit Crane’s body. He was ok.

Crane’s teammate Mark Smith ran 7.129-178.52 and then in session two, broke all the selector forks. So the Warpspeed team decided to fit the new billet cylinder head on Smith’s bike for eliminations and finished at 4.00 am.

Phil Crossley worked his socks off to get the engine repaired—making a crankshaft in his shed, machining cases, fitting a spare cylinder head and barrels for Tony Clark to compete. Clark missed the opening qualifying session while still rebuilding the bike and later ran 7.392-179.97.

Jiri Lukes had his chain break in the shutdown area. He was ok and ran 8.767-148. Roger Moore had a primary drive assembly break (snout broke), so Bob Brookes went back to his garage and machined a new part. Five hours later he was back at the track.

Smith’s motor cut out while staging against Clark in the semi-final. Peters led from start to finish in the final 7.445 to Clark’s 7.725.

Steve Wood has had clutch problem for most of the season and fitted a AMS2000 system and finally it all came good. He ran 8.002 at 178.51 personal best figures in the second session and then his first seven-second pass—a 7.977 to the delight of the other teams. This is the first time all the competitors, more than eight bikes, have run a seven second pass in qualifying in an ACU championship event.

Mead broke and was out, so Dave Smith came in, but could not start his bike. So second alternate Ross Morrison lined up against Venables and was ahead of Venables at the 1/8th mile. Venables powered past to take a close win with a 7.399-to Morrison’s p/b 7.469.

First semi and Mechaell redlit against Venables. Second semi and it was a great race with Morrison Jr. 7.311 to Hope’s 7.376.

Louis Davies had sown up the ACU Comp Bike Championship and focussed on being the first Comp Bike rider to run a six-second pass. He qualified with a 7.056-185.13.

There was a battle for second place in the championship between Morrison and Joe Elliott. They met in round one and Elliott redlit, leaving Morrison a bye to the final. The other side of the ladder, Roe beat Jasmine Cordelle and Rawnsley lost to a returning Ian Chrichlow—making his first appearance.

Chrichlow beat Roe to reach the final, then won the event with an 8.503 to Morrsion’s breakout 8.496.

Hallett ended Wright’s championship with a holeshot win in the semi-finals. Sawatzki beat Hallett in the final to win the championship.

Lester lost to Paul Adams in round one. Gooding lost in the semi-final to champion Phil Pratt.

The final was last year’s number one Pratt and number two Adams. It was Adams who went on to win the event.

Brown beat Philip James in the semis. Coulsell had a bye run in the other semi, but had a trans brake problem, which made him jump forward on the start line and disqualifying him.

Brown had a solo run in the final and won the Wild Bunch championship for 2021.

Congratulations to the following ACU Champions:

Congratulations to the following National Champions: