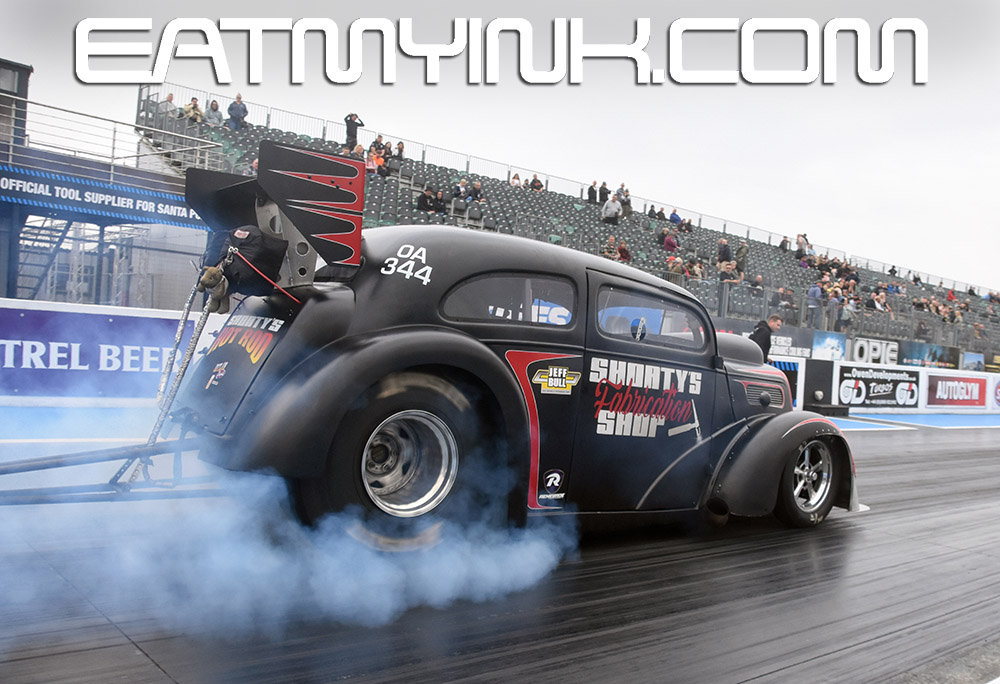 There was a big turnout for Santa Pod’s final Nostalgia event of 2021—the Hot Rod Drags. History was made in the Outlaw Anglia class on Saturday during qualifying, which saw the first six-second pass in the UK and Europe. Sunday was disrupted by light rain, which saw some racers and spectators leave early.  But at 2:00 pm, racing was back on.

Twenty eight cars qualified for Outlaw Anglia eliminations and Jedd Guy (featured photo above) became the first of the breed to run a six-second pass—6.974 with a personal best speed of 193.76 mph.

Round one of eliminations saw Millar equal his p/b 7.043. Payne ran another p/b 8.707 to beat Rob Brindle, who managed to complete the rebuild of his car at the track. Special thanks from the crew to Millar for the new body and Geoff Hauser for the chassis repair in six weeks.

Ben Kennedy recorded his first nine, beating Tidswell with a 9.838. Guy ran another jaw dropping 6.886 in round two.

There were a couple of shocks in the next round with Phil Drewitt knocking out Payne and Webster breaking against Mercer, who ran an 8.681 p/b.

There was a big turn-out in the Wild Bunch class with fourteen teams recording there personal bests over the weekend.

Santa Pod marshal and Wild Bunch racer Dave Rowlands passed away earlier this year, and his son Warren ran his dad’s car, recording the first eight second pass at 8.908-143.52 to the delight of the track crew and team.

There were two new debuts. Angelo Lanni has been rebuilding Henry’s Revenge for six years, which was John Powis’ original chassis, and has fitted a new body and ran a best of 9.481-136.96. The other car was Rich Butcher’s, which was built in the 1970s by Ken Cooper and ran 13.159

There are no eliminations in the Wild Bunch, it is run as close to your dial-in. Pete Brown won the event.

Run on a dial-in, the Super-Charged Outlaws put on a great show.

Tony Underhill had some handling issues and some spectacular wheelies and still ran a p/b of 7.056 in his all-steel body Willys.

Andy Hadfield also went for the high altitude award when his wheelie bars folded and he went very high, resulting in damaging the front axle and minor damage to the sump.

Wayne Allman had a new ignition system and blower and ran a stunning 7.260-188. Roy Wilding had a new fuel set-up for his slingshot.

The winner was Mike Couch.

Margesson’s weekend ended in round two to Graham Barton. Martyn Hallam also knocked out Barnett in the same round.