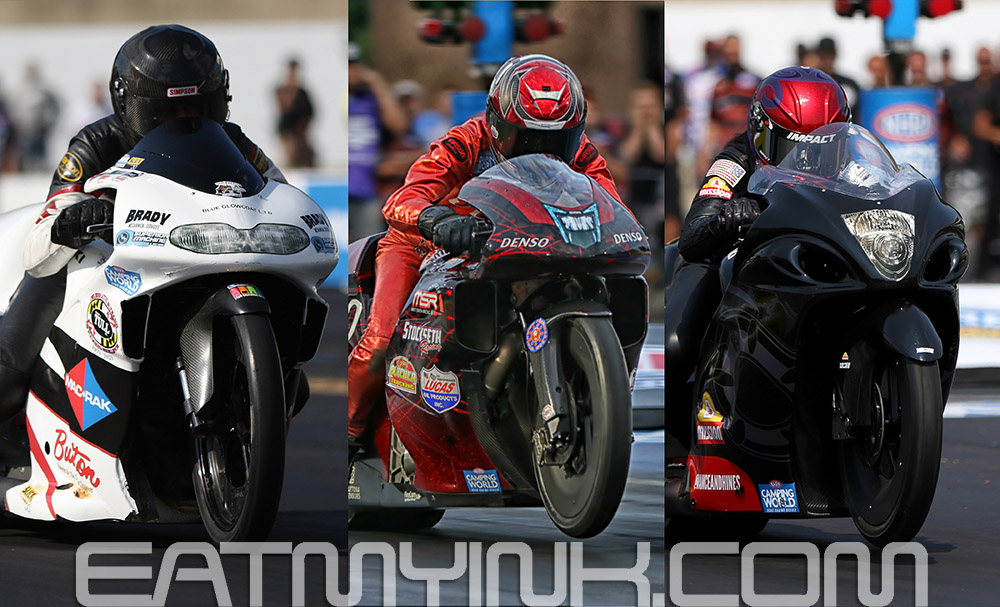 Even though Eddie Krawiec has an outside chance to take the crown, this year’s NHRA Pro Stock Motorcycle championship has boiled down to Matt Smith on his S&S powered MSR Buell, Steve Johnson on his Monster 4V Suzuki TL1000, and Angelle Sampey on her V&H 4V Suzuki Hayabusa. They’ve all had wins in the NHRA Camping World Drag Racing Series Countdown in the Championship, and will likely need a win at this weekend’s Auto Club NHRA Finals at Auto Club Raceway at Pomona to win it all.

Competing for a world championship at the final race of the  season is a new experience for Steve Johnson, who enters the final race 20 points behind defending world champ Smith. Three-time champ Angelle is just 30 points back and with each round win worth 30 points in Pomona due to the points-and-a-half scenario at the finals, the world title could be decided on the final run of the season.

“I’ve been chasing this championship for a long time and to be in this position, I’m over the moon,” said Johnson, who has  three wins and three No. 1 qualifiers in 2021. “I’ve dreamed of it and we’ve applied some action and now the dream is getting pretty close. We’ve got a lot of heart and it’s really, really going to be fun.”

It’s been Johnson’s best season by far in a career that’s stretched 30-plus seasons, and his victory at the most recent race in Las Vegas set up a viable championship scenario in Pomona. After a miserable first-round loss at Bristol, Johnson bounced back in a major way, reaching the final round after defeating Charles Poskey, Angie Smith and Angelle Sampey. He then pulled off the win against Karen Stoffer—who was quicker but redlit—picking up his third victory this season and ninth in the veteran’s career.

Matt had almost three hundredths on track in the Vegas semi against Stoffer, but gave up over four at the tree. His fate in his own hands, Smith was totally pissed at himself.

“Up early on Monday,” Matt wrote on Facebook. “Just can’t sleep after messing up in the semi yesterday. We are going to Pomona with the points lead and are going to do everything we can to get that fifth championship.

“One thing you learn out here is you really find out who your true friends are. We are going to test Angie’s bike and try and get it better for Pomona. There’s a lot of haters out here but thank you to all of our fans who stick behind this MSR team.”

And team will be Smith’s advantage, with Angie and Scotty Pollacheck to help him out. The MSR trailer has a whole lot of motors and you can guarantee that all the best ones will be lined up to go into Matt’s Red Rocket.

Three time champ Angelle will have all the resources of Vance & Hines behind her, with teammates Andrew Hines and Krawiec anxious to knock out any competitors.

Independent Johnson can’t necessarily rely on any help. Certainly, Stoffer’s White Alligator Racing team will be out to play the spoiler role no matter who they’re lined up against, and he TL 4V Suzuki has been blindingly quick lately.

“It took us 17 years to win our first national event and I’m a sucker for this sport,” said Johnson. I really want to bring home a championship. I’d love to be a part of that championship fraternity and to be able to try to do it in our hometown (current Alabaman Johnson is originally from Southern California) is going to be really, really special.

“We’ve got great parts, great education on how to put the parts together, and we learned a little more about riding the motorcycle. We’re doing a good job that making sure there are no leaks in our boat.”

Hopefully, Johnson’s crew chief Jock Allen can keep from hurting himself between now and Sunday’s final round.

The Pro Stock Car world title appears headed to come down to a duel between a pair of rivals and four-time world champs: points leader Greg Anderson and two-time defending world champ Erica Enders. Anderson has been the points leader the entire season, but a first-round loss in Las Vegas opened the door for Enders, who advanced to the final round and pulled to within 32 points heading into Pomona. With the points-and-a-half scenario, that is just more than one round, which means the intensity will be off the charts at Auto Club Raceway at Pomona.

Of course, both Anderson and Enders will have to deal with a loaded field, too, including star rookie Dallas Glenn, who won in Las Vegas and is still in contention at 109 points back, Kyle Koretsky, Troy Coughlin Jr., who beat Anderson in the opening round in Vegas, and Aaron Stanfield. But Anderson and Enders have both been in numerous pressure-packed moments through the years, and Enders is ready to embrace it heading into what will be a nailbiter to close out the Pro Stock season.

“We’ve definitely been in a bunch of high-pressure situations and I expect nothing less going into Pomona,” Enders said. “We were excited to close the gap in Las Vegas and we were able to give ourselves a chance, and we just have to and go do our job this weekend. I have to be up on the wheel, we’ll have to have our car tuned up as best we can, and we’ll just go out there and battle and see what happens. It will definitely be exciting for everyone in Pomona.”

In Top Fuel, Steve Torrence is on the cusp of continuing his incredible run of dominance. He currently leads 2017 world champ Brittany Force by 105 points heading into Pomona, putting him in a prime position to clinch a fourth straight world title. Others to watch include Mike Salinas, who has advanced to back-to-back final rounds, Dallas winner Justin Ashley, Antron Brown, Leah Pruett and Josh Hart.

It will be a wild final race to the title in Funny Car, as Ron Capps currently has an 58-point lead over Don Schumacher Racing teammate and defending world champ Matt Hagan heading to Pomona. Cruz Pedregon is 83 points back after winning in Las Vegas and remains in title contention in what should be a thrilling finale. Other top stars racing for the win include John Force, Bob Tasca III, Alexis DeJoria, Robert Hight, Tim Wilkerson and J.R. Todd.

photos by Tim Hailey, story by Hailey and NHRA