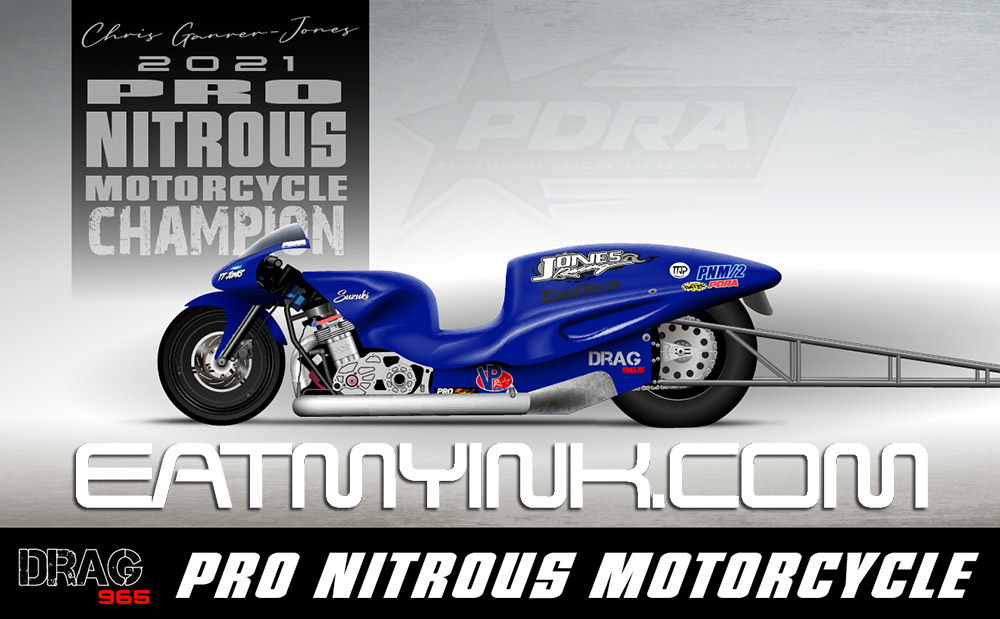 Chris Garner-Jones has been a perennial championship contender in the Professional Drag Racers Association (PDRA) Drag 965 Pro Nitrous Motorcycle class for the last few years, but he’s come up just short of the title. That all changed this year, though, as Garner-Jones won the 2021 world championship a year after the passing of his father, class pioneer T.T. Jones.

“I wish I could put it into words what this means to me,” Garner-Jones said after securing the title. “I’d probably be doing backflips and I can’t do a backflip. But it’s a big weight off my shoulders. I wanted to do it while my dad was here, but unfortunately things happen. That’s life. But this one is definitely for him. All the way. My brother [William] is the best tuner in the world and I stand behind that.”

In late June, Garner-Jones picked up his first PDRA win since 2015 at the North vs. South Shootout presented by Line-X at Maryland International Raceway. The win came just a week after Father’s Day, making it an especially meaningful victory.

The 31-year-old rider added a runner-up finish at the Summer Shootout presented by Ty-Drive at Virginia Motorsports Park, then locked up the world championship at the Brian Olson Memorial World Finals presented by ProCharger on his way to the event win.

“I just started crying and wishing that was my dad was here, of course,” Garner-Jones said, describing his reaction when he clinched the title. “But that’s life, man. I know he’s happy at this point. Now I do know. I’m cool with that.”

Garner-Jones and the T.T. Jones Racing team also won the XDA Pro Xtreme world championship, marking the second consecutive year that the PDRA Pro Nitrous Motorcycle champion also won an XDA title. But it was the PDRA title that was critical, as T.T. chased the title since the PDRA’s first season in 2014, while Chris joined him in the chase the following year.

“It’s very rewarding,” said Garner-Jones, who thanked his family-based team and supporters like FuelTech. “I believe it gave me the confidence to want to keep racing. I was getting away, but now I think I’m here to stay.”

The PDRA will celebrate Garner-Jones and its other 2021 world champions at the annual PDRA Awards Banquet on Friday, Dec. 10 at the Indianapolis Marriott Downtown.

story and championship graphic by PDRA, photos by Tim Hailey