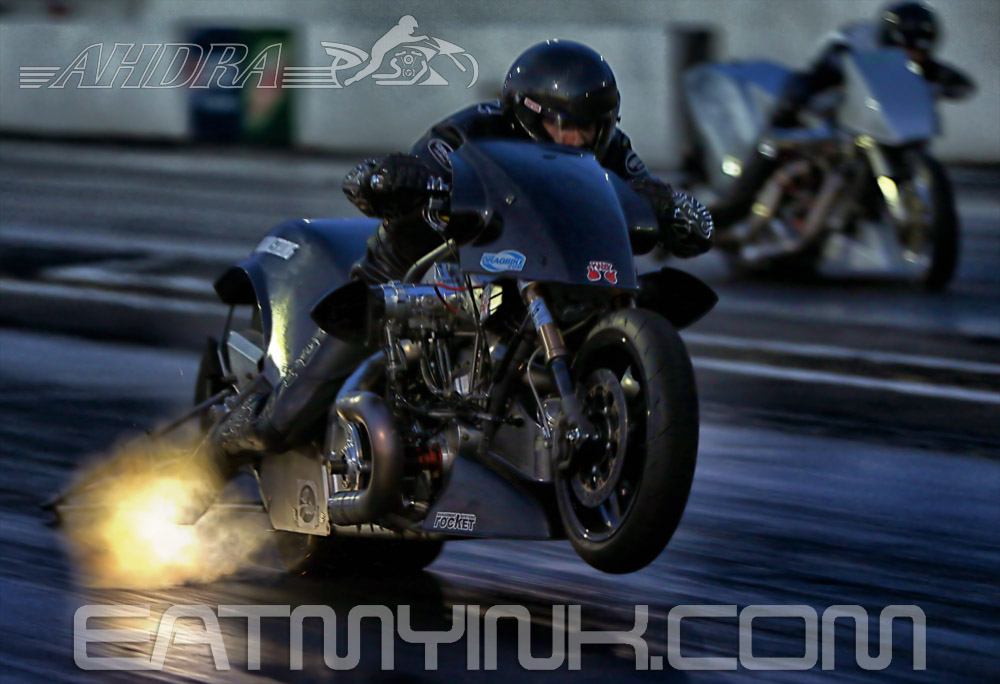 The AHDRA World Nitro Nationals are set to rotate the earth of north Florida, as the all-American motorcycle drag racing series takes over Gainesville Raceway on November 5-7.

National champions will be decided and rewarded at this final 2021 stop on AHDRA’s nitro and gas V-Twin road show.

Milford, Ohio, based Top Fuel Harley racer Ryan Peery (featured photo above) has a big 108 point lead in TKR & Associates Top Fuel over Cecil County winner Tracy Kile, and yet both of these nitro studs will be pushing the limits of steel and aluminum to finish off the season with their best performances ever.

Defending champ Rich Vreeland will be doing the same, while graciously handing over his nitro crown in what is essentially a peaceful yet violently explosive succession of power.

Bike owner/tuner Red Rhea is stoked about his rider Michael Balch’s year in Hawaya Racing Nitro Funnybike—the first year on nitro for Balch. “Michael won his first race and is on his way to a championship,” said Rhea, who also touted Balch’s prowess at acquiring and servicing sponsors—an essential skill for today’s racers. “If anyone is sitting on the fence waiting to jump into nitro racing, Michael’s year should be an inspiration to them to get out here!”

Rhea will have the bike’s Orangeburg destruction repaired and on track in Gainesville, along with Sam White, Armon Furr, Rocky Jackson and more.

Preston “President” Bartlett is the leader for the Hawaya Racing Pro Fuel championship. His four wins set-up a 78 point lead over second place multi-class racer White. (note that these points totals were updated on November 2. An earlier version of this story had a different point total.)

Still, expect to see Sam racing at Gainesville, along with Jim Martin and many more in the popular carbureted nitro class.

Shane Pendergrast has a commanding Zippers Performance Pro Modified lead over John Price, while Gary Douglass’ Pingel Modified points lead is only 22 points over Jeff Workman, who has just 10 on Nate Carnahan.

Carnahan brings a 59-point lead over Brad Reiss Jr. into the last 10.30 index race of the year.

Ken Strauss leads 63 year-old John Shotts for the Top Eliminator 9.30 index championship, but John is calling the Shotts as Vreeland’s Harley-Davidson 9.90 leader. He’s only 22 points ahead of Robert Willis, who has a scant 5 points on Reiss. This class is going down to the final round!

Potter leads Monkey Motorsports Eliminator and is tied for third in 11.50 index. That class’ championship battle is a classic father/son duel between Jordan and Jason Leeper.

The Bagger classes will all be totin’ the luggage, including Law Tigers Pro Bagger, MTC Bagger and T-Man Performance Bagger Eliminator. Victor Gotay, Greg Quinn, David Miller, Rylan Mason, Crystal Lynch and more will all be sending it.

Wanna get your own start in racing? Start with AHDRA’s Trophy class and see if you’ve got what it takes!

Friday is reserved for test and tune, followed by live music from the Local Traffic Band. Qualifying starts on Saturday from 11:00 am to 6:00 pm, with eliminations on Sunday from noon to 6:00 pm. Spectator prices are $25 daily, $45 for two days, or $55 for all three days. Save by preordering at raceahdra.com. Camping and vending spots are available.

AHDRA will cap this championship weekend with a full-blown banquet at the Gateway Grand Hotel and Conference Center, 4200 NW 97th Blvd in Gainesville.

Bill Rowe, his family, and the AHDRA community look forward to welcoming racers and fans back to beautiful and fast Gainesville Raceway.