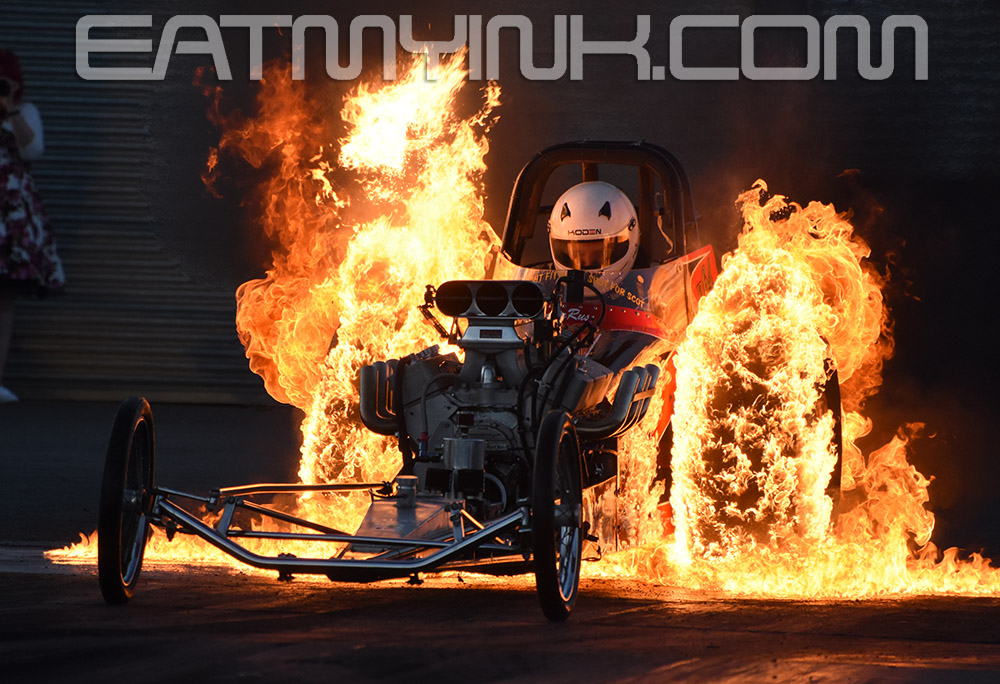 This was the tenth anniversary of Santa Pod’s Dragstalgia, which should have been celebrated last year, but due to covid it was cancelled.

Friday started with Run-What-Ya-Brung (RWYB) and then the main classes were due to run at 5.00pm. Rain fell before the sessions were due and ended the day, but the weekend was just getting started.

NSA Bike Shootout featured bikes mainly from the seventies and almost half the field were double engine. John Hobbs was the man to beat, running low 10 second passes.

Ray Law on his double engine Triumph was Hobbs’ nearest challenger with a 10.410 at 132.88 mph. Dave Clee ran 10.86 on his Puma Triumph. Tim Howell’s 11.432 on his BSA just edged Gary Norman’s double engine Norton’s 11.437—now running better after help from Hilborn on the fuel system. Martin Willmott had traction problem with his new rear tyre.

The final was to be between Hobbs and Law, but Law could not get his bike started, so Hobbs soloed to the winners circle.

Kevin Melling set a new world record for ET of 8.477 on his 750cc Kawasakai H2 to lead the Old School Stockers field field. Claire Rule was next with an 8.600. Dean Stevens ran 8.9 in testing on his dad Mark’s bike, but ran 9.0 in qualifying.

Saturday’s Nostalgia Cannonball featured Nitro Nostalgia Funny Cars, Slingshots, Altereds and Rear Engine Dragsters. Just before the first session there was a minute silence for British drag racing legend Dennis Priddle, who had recently passed away. Paul Harris had a new Monza body and painted it as a tribute to Priddle’s 1997 Funny Car.

Dave Grabham was the main challenger to Garlick, running 7.159 and 7.206 in his Altered. Tony Betts had oil issues with his Funny Car and missed the first session, but ran 6.400 at 220.05 mph, but at the expense of two pistons and liners.

Manning restarted, but glanced the wall on a solo run damaging the car. Manning was ok.

A Outlaw Anglia new ET record was set at Dragstalgia, and there were a few personal bests and new cars making their debut. During qualifying, the final of the Outlaw Anglia bracket race from the previous event was won by Doug McClure when Rob Nixon redlit.

In the semifinals, Spencer Tidswell had a fluid leak, leaving Taylor a bye run to the final. Guy beat Rushforth in the other semi 8.561 to 8.753.

Luke Watts finished completing his new Altered at the track and did a test pass on Saturday. Paul Dale ran 8.5 seconds in testing on Friday.

Reigning Gasser Circus champion Sean Milsom was the number one qualifier of the twenty car field with a 10.135 (dial in 10.12),  but redlit against Lee Pike in round one.

The semifinals saw Billy Jones breakout in his Willys Coupe against Lee Pike’s Chevy Nova. In the other semi, Tony Pearson was doing some awesome burnouts and had a bye run to the final. Pike won with a 9.354 (9.35) to Pearson’s 10.721 (10.68).

Sadly, there was a incident with Andy Stones’ beautiful Frantic Altered, when the engine revs were high and the car ran into one of the garage doors. Stones was ok after being checked over.

Steven Heaven did his first fire burnout on Saturday night with great success.

This was the seventh Annual Willys War and in session three, Phil Evans ran a jaw-dropping 9.533-142 in his twin turbocharged Willys pick-up. John Dalrymple also ran a 9 second pass (9.940), and Mick Payne came close but recorded a 10.036.

One of the most consist drivers was Damien Bacon, running 10.8 seconds on every run and in the top five of every session.

It was a great turnout despite covid restrictions, and hopefully next year will see the return of overseas competitors to one of Europe’s top nostalgia events.