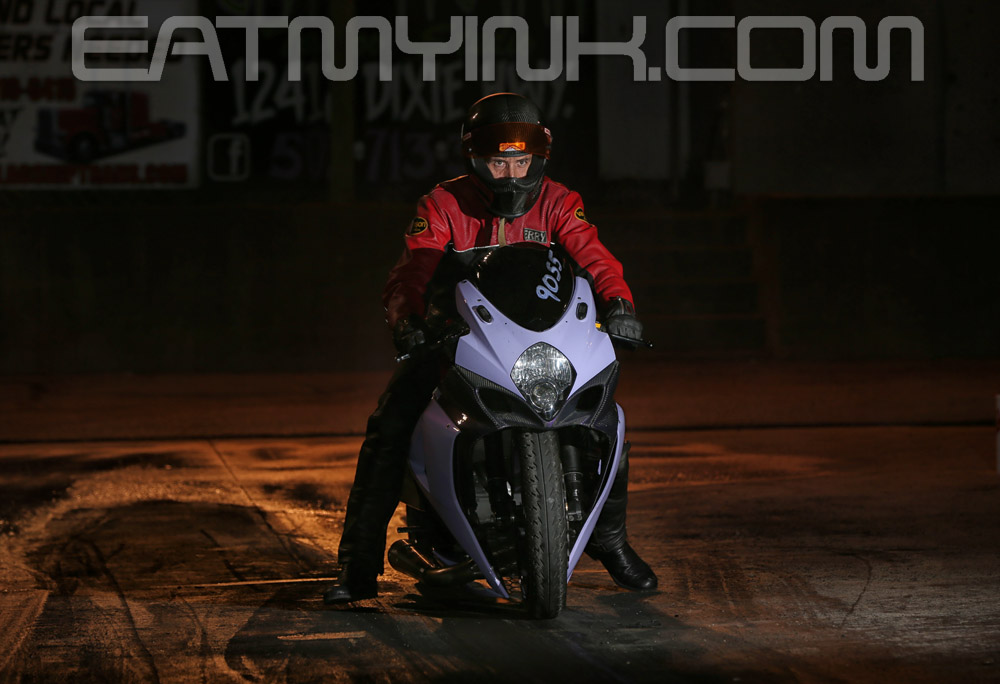 Even though Charlie Bennett’s annual Turkey Bash is held at my home track of Ohio Valley Dragway just outside of Louisville, I’d never been to it until this year. And as I drove out to the track on Friday evening, it’s like I’d never moved away—which I did for some 30 years. I mean, it’s Friday night, I’m headed to Ohio Valley, and REO Speedwagon’s “Say You Love Me or Say Goodnight” comes on the radio….it’s 1978 all over again.

It turns out I had a lot of time to listen to the radio. A mile or so from the driveway to the tack is the entrance to the Knob Creek Gun Club—home of a big annual gun show and machine gun shoot the same weekend as the Bash. Allegedly, this is the last year of the shoot and the place was mobbed. There were no fewer than three major wrecks on Dixie Highway outside of the two events that afternoon, and crash traffic had me stopped just outside of the gun club for an hour. I smoked a cigar and listened to more arena rock while a Vietnam era Huey took gun-addled passengers on rides back and forth over the traffic jam. Kurtz himself could have been living somewhere in these swamps, Martin Sheen and Laurence Fishburne boating up the Ohio River some 50 yards to my right.

An ambulance left the crash scene headed back towards town, along with a rollback pulling a smashed F150 full of bloody, deployed airbags, and soon traffic was moving. A half a mile later I watched an old two door Exployer drive hellbent into and over Ohio Valley’s back gate. The shitbox sat bouncing on top of the crumpled fence like a bobblehead no one would want to buy. This was quickly becoming a scene from a Rob Zombie film.

Once inside the track, though, all became peaceful—or at least the kind of managed mayhem that one expects at a drag race. Muscle cars were burning out one after another, the pace moving quickly down Ohio Valley’s concrete eighth. Saturday would see track prep by the best in the business—Total Venue Concepts—but Friday night was no-prep night. Which meant no time spent scraping, dragging, spraying, or any other fussy nonsense. Light ‘em up, stage ‘em, take the stripe, repeat.

I was there mostly for the bikes, of course—local mover-and-shaker Bird Man’s All Muscle No Hustle series was on deck. In the meantime, I was tuning up my game by shooting cars.

The bikes came up and there was—wha?—C.J. Decker on Terry Hoke’s charcoal and red  GSXR and Terry on a—lavender?—bike.

“It was a all-motor hand-clutch bike,” said Terry. “It was new, only had a few passes on it. I sold one of my ‘17s the week before and I have been looking for another ‘07-08 GSXR for a while. Carlo Testa has one of my ‘07s at his shop installing a Maxx on it. I just wanted to get another till that one’s done.

“CJ had trouble with his bike testing Thursday, I offered that one to him so he could make the race. It’s not the same one he road in Brian’s (NHDRO) race the week before.

“I went to Virginia Monday before the race and picked the (purple?) bike up. When I got it back home I had to change a lot of stuff on it to meet the rules for Bird Man’sAll Muscle No Hustle class, I finished it up Thursday around 2 o’clock. Luckily, Charlie Bennett was having a private test and tune. I made about three passes that night. It did not go well at all.

“I took the bike back home and changed the clutch set-up, the shock, and shortened the bike three inches, Really it was just a shot in the dark because there was no testing before the race. First pass is first round, and first round we drew A.J. Lewis.

“It was not a good draw for us at all. A.J. is fast and is probably more consistent than anyone else in the class. We knew we had our hands full with him. Somehow we got lucky and inched by him.

“Round two was not a good draw either. We drew CJ. He was in the same situation as I was in—he was on a new bike also. He adapted a lot quicker to the new bike then I did on mine. He had me by a .080 on the tree and was out front the whole track till about 600 feet (of 660!). That pass was my best MPH all day.

“Third round I had Terron Babbage on Brad Messer’s bike—another really fast bike that has been in the finals the last two times out. Me and Terron was dead even on the tree, but his bike started coming up about half track and he had to let out a little. That was just enough for me to sneak by to get the win.

“The next round was the finals and to no one’s surprise we had Josh Ross. Josh has been dominating the class all year with three wins in a row. We knew this would be the toughest race of the night. Both bikes made really good passes and somehow we stayed out front to take the win.

“I have to send a big thanks to ‘Crew Chief Ronnie Fuller,’ Mika Wheeler, Deshawn Wheeler, Jake Conover, Rafael Diaz, CJ, Bird, Braden, and anyone else that helped. Without them it wouldn’t have been possible!”

Saturday night it was the All Muscle No Hustle Heavyweights and TVC prep. Zack McDaniel took the final round win over Mark Wilson.

Who won car classes on Friday? I have no idea.

Hoke was racing his dragster on Saturday and got down to three left when he lost by giving up the stripe—a loss he blames for being in the wrong place at the wrong time on the way home, because the mean streets of Kentucky weren’t finished!

Hoke was headed home on Dixie Dieway when all hell broke loose. “I was heading north when a van hit a car head-on and spun out into my lane. It almost flipped my trailer over. The driver of both the van and the car got out and took off running. I think the guy in the van was drunk. I’m not sure why the guy in the car took off but he left all his drivers license and insurance information in the seat.”

Here are Terry’s photos of the crash

“I’m just glad they didn’t hit the truck, I had the kids with me. Thankful no one got hurt. I can replace all that stuff.”

And the color of the new bike? “I’m not sure what you call it!”

Here are all the photos I’ve edited so far, so if you don’t see yourself, contact me and I’ll see if I got you:

story and photos by Tim Hailey; video by Rob Zombie, Francis Ford Coppola, and some guy in Germany