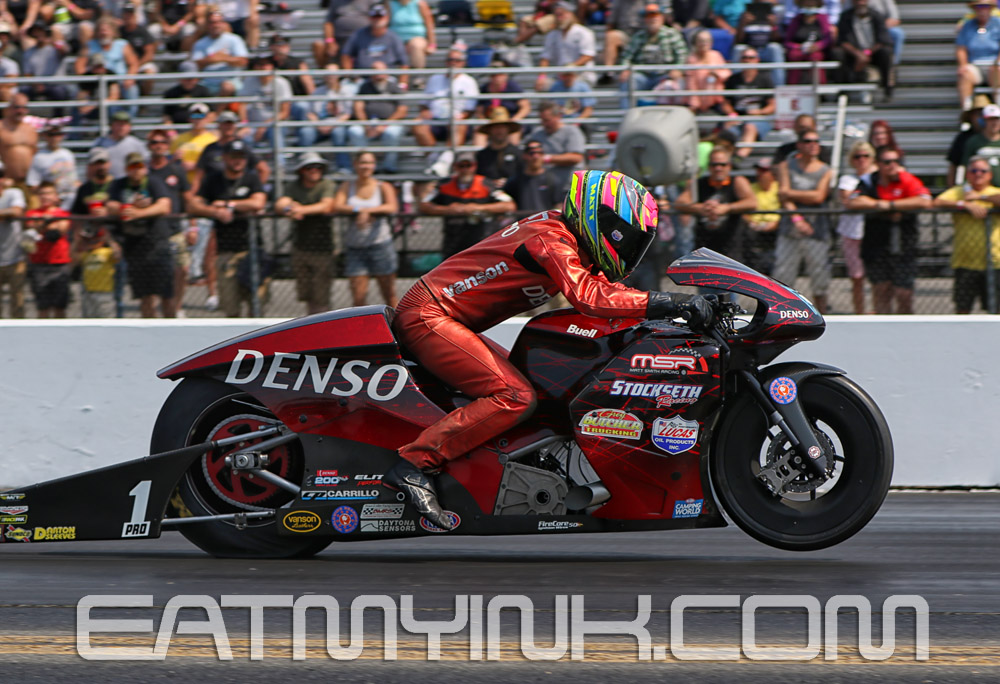 After a slow start in the Countdown to the Championship, regular season Pro Stock Motorcycle dominator Matt Smith is back to form, winning last week in Dallas and laying down a strong run in Bristol to open the weekend at number one.

Smith went to the top on his Denso Auto Parts/Stockseth/Matt Smith Racing Buell with a run of 6.900 at 197.51. This weekend marks the first official race for the class at Thunder Valley and Smith, the defending world champ and current points leader, made a strong first impression at the track that has his dad Rickie’s name on the grandstand. If it holds, it would be the fourth No. 1 qualifier for Matt this season and 47th in his career. Incidentally, Rickie also sits number one in Pro Mod.

“I love sharing the spotlight with my dad,” said Matt. “He’s an icon, he’s my hero. We’ve won races together, we won a championship together in 2013. So a lot of people haven’t been able to do that, and I’ve been able to share my success with my father, and be able to race out here with him and it’s been a real honor and a real pleasure to be able to do that.”

It is the fourth of six playoff races in the class and Smith had an eight-point lead on Steve Johnson entering the weekend. Johnson is currently third with a solid pass of 6.942 at 193.60 on his Monster 4V Suzuki. The best news for Johnson’s weekend is that his crew chief Ervin “Jock” Allen is back at the track.

Also with a Monster 4V Suzuki, Chris Bostick is currently second after going 6.927 at 193.27. Bostick’s motor is built by George Babor and sits in the frame rails of a Mike Mullaney chassis. Interestingly, Monster co-developer George Bryce was in hand Friday.

Smith also has a Suzuki in his stable, and has plans to put it in the winners circle. “We are currently putting the Maxx ECU fuel injection on it,” said Matt. “We ordered a couple of Monster heads, we ordered a Vance & Hines head, so we have both things coming and I can promise you next year that we will be a contender with a Suzuki next year and show people how fast it will go. And if I get it really fast, I’ll ride it, if not I’ll put somebody else on it. We’ll see what happens. We’ve got some big announcements coming up pretty soon with some Suzuki stuff.

Will Matt and wife Angie have to fight over the Suzuki if it’s really fast? “No, she wants to stay V-Twin. She is dead set and I don’t blame her. Our V-Twin program is great. It (the MSR Suzuki program) is just something that I want to prove to myself. I started my career on Suzuki, I’ve never won (and NHRA race) on a Suzuki, and that’s one of my bucket list that I want to do, and I’m gonna do it somehow or another.”

Speaking of Angie, she walloped her finger with a hammer while changing valve springs last night (sure you want to stay V-Twin Ang?). A late night trip to the emergency room got her splinted and unless she changes her mind at the last minute, she will not be making qualifying today and probably not racing tomorrow.

Brittany Force made the quickest run in track history at Bristol Dragway on Friday, powering to the provisional No. 1 spot in Top Fuel.Force blistered the track record with an impressive run of 3.682-seconds at 328.94 mph in her Flav-R-Pac dragster, sending her back to the No. 1 spot. If it holds, it would give the former world champ an incredible 12 No. 1 qualifiers this season and 10 in the last 11 races. She entered the weekend 52 points back of points leader Steve Torrence and Friday was the start of what Force hopes is a big weekend.

“Twelve No. 1 qualifiers is an accomplishment for our entire team,” said Force, who is after her 32nd career No. 1 qualifier. “That’s huge and it’s hard work from every one of our guys. It’s not easy to pull that off and we’ve done a good job at it, and now our focus is hopefully on two rounds on Saturday and then raceday. Our mindset is we’re excited. We’re in the hunt for this championship and we’re going to fight for it. This team is an incredible group and I’m lucky to have them.”

After delays due to issues with the timing, Force and the David Grubnic and Mac Savage led Flav-R-Pac team found themselves making their first qualifying pass under the lights.

“We definitely made a few changes in that downtime, but I try to stay out of it, it gets my head in the wrong place and I start worrying about things so I leave that to the team and David Grubnic and Mac Savage. They did a fantastic job with whatever adjustments they did make with the sun going down and the track cooling down,” said Force who has set five elapsed time and six speed track records this season. “We made it down there. I wasn’t sure if she was going to make it, it was moving around and it felt like it was going to let go but we made it to that finish line.”

That must have been what Force and Frank Hawley were talking about when I saw them in an after-hours confab. They stood in the left lane, looking and gesturing down track for quite a while. By the time I decided I needed to shoot this, put my lens back on the camera, and made it downstairs, they were on their way back to the golf cart.

In Funny Car, Tim Wilkerson drove to the No. 1 spot in his 11,000-horsepower Levi, Ray & Shop Ford Shelby Mustang with a pass of 3.965-seconds at 295.27 mph. If it holds, it would give Wilkerson his first No. 1 qualifier since 2019 and 21st in his career as he tries to finish his 2021 season on a good note. Wilkerson has one victory during the Countdown to the Championship this year and is after a second with three Funny Car races remaining. Robert Hight is currently second after going 3.968 at 323.50, while his teammate, John Force, is right behind with an identical 3.968 at a slower 322.73.

Robert Hight and the Auto Club Chevy team built on some of the consistency found last weekend with a solid 3.968-second run at 323.50 mph, the top speed of the session. Their efforts put them No. 2 and gave them an extra two bonus points.

“Good way to start the weekend out here in Bristol. There was probably more out there but it’s going to be cooler conditions tomorrow with the rain, hopefully we get both those runs in,” Hight said. “Just taking it one run at a time, making sure we’re getting down the track and having some fun while we do it. Getting a clean run like that, that’s what this Auto Club team knows how to do, and we just have to keep on building on it.”

John Force and the PEAK Chevy were in the groove for the full pass clocking a 3.968-second run at 322.73 mph to be third quickest and earn one bonus point.

“Pretty good start to the weekend out here in Thunder Valley. Getting the PEAK Chevy from A to B, picked up a bonus point. We’ll take it,” Force said. “There’s supposed to be some weather tomorrow, but we should get something in, be good for race day when it’s supposed to be real cool. We’ll see how it goes.”