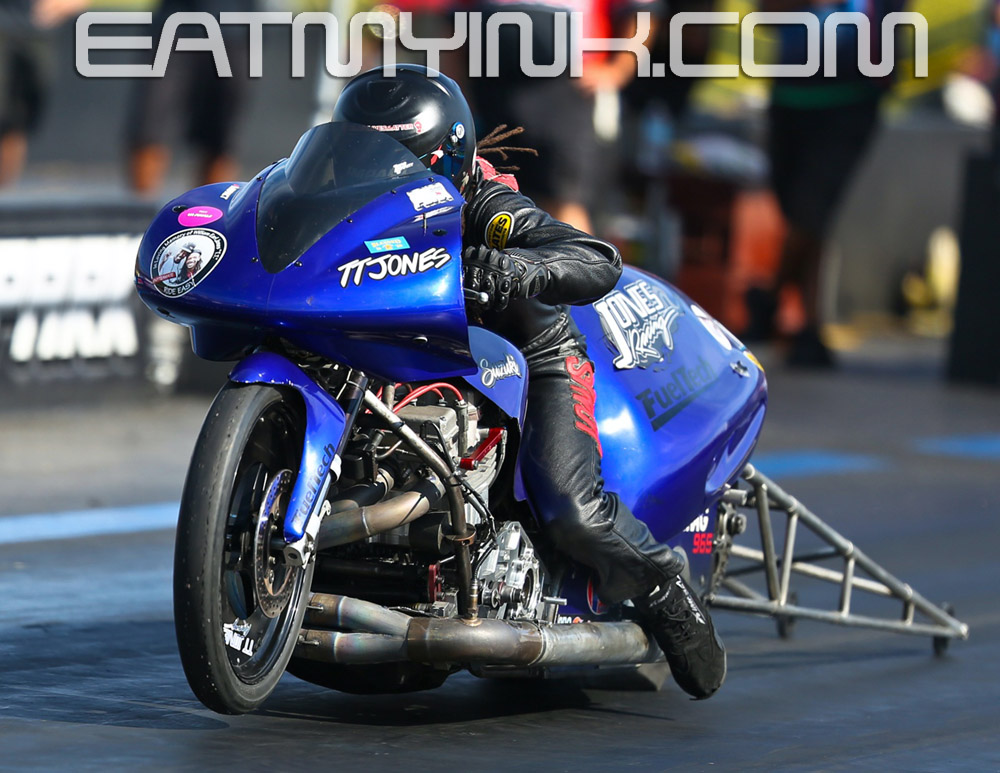 Second-generation Pro Nitrous Motorcycle rider Garner-Jones has been a championship contender for the last few seasons, but he finally scored his first world championship in the class and backed it up with a win to make for an emotional race day. Garner-Jones dedicated the championship and the race win to his late father, T.T. Jones, who passed away last year. Garner-Jones rode his T.T. Jones Racing ’11 Suzuki to a 3.991 at 175.52 on a bye run in the final, as Paul Gast broke after staging.

“I wish I could describe what this win and this championship mean,” said Garner-Jones who also won the 2021 XDA Pro Xtreme championship. “I’d probably be doing backflips and I can’t do a backflip. But it’s a big weight off my shoulders. I wanted to do it while my dad was here, but unfortunately things happen. That’s life. But this one is definitely for him. All the way. My brother [William Garner] is the best tuner in the world and I stand behind that.” Garner tunes with a FuelTech ECU.

Garner-Jones secured the world championship in the opening round when he won with a 4.009 at 176.67 on a bye run and points leader Travis Davis lost to Gast. He was unopposed again in the semifinals when he ran a 4.108 at 144.77.

In the Jr. Dragster classes, Chris Suppers (Coolshirt Systems Pro Jr. Dragster) and Hunter Cunningham (Classic Graphix Top Jr. Dragster) secured the event wins. It was an all-Virginia final between Suppers and Louis Crockett, with Suppers running 7.941 to Crockett’s 7.97, both on a 7.90 dial-in. Cunningham used a starting line advantage and a 9.06 on an 8.99 dial-in to defeat 2021 world champion Rowan Parlett and his 9.068 on an 8.91 dial-in.

The 2021 world champions will be celebrated at the annual PDRA Awards Banquet on Friday, Dec. 10 during the Performance Racing Industry (PRI) Show weekend in Indianapolis.

With four wins in the previous seven races, Jim Halsey rolled into Virginia Motorsports Park as the 2021 Pro Nitrous world champion. Halsey, tuner Brandon Switzer and crew chief Eric Davis kept pushing, though, and closed out their PDRA season with a fifth win. In the final round, Halsey in his Fulton-powered “Daddy Shark” ’68 Camaro matched his quickest pass of the day, a 3.62, to dispatch Ron Muenks and his 3.658 at 206.10.

“I think we had more pressure on us because we lost first round at Maple Grove and lost at GALOT in the semis,” said Halsey, now the only three-time Pro Nitrous world champion. “We just wanted to win a race. It’s been a few [events] since we did it. The consequences weren’t there to lose, but we wanted to go out on top with a win.

“This is like a dream come true for me,” Halsey continued. “We’ve been racing for probably close to 30 years, and to win three in a row and to run the numbers we’re running, I couldn’t be happier. My driving is pretty decent at times, not so decent at other times, but very happy. I have a great team. They’re just as happy as I am about it and they deserve way more credit than I do.”

Driving Dave Pierce’s Reher-Morrison-powered “Purple Gorilla” ’68 Camaro, Muenks qualified No. 5 and won first round with a 3.823 over a red-lighting Rob Hunnicutt. It was all mid-3.60s from there, though, as Muenks posted a 3.665 to beat Brian Shrader and a 3.655 to win on a holeshot over No. 1 qualifier Tommy Franklin’s 3.64.

On a day that saw several of the quickest runs in Pro Boost history, Randy Weatherford didn’t have the quickest car, but he stepped up when it counted. The Danville, Virginia-based driver of the ProCharger-boosted WS Construction ’17 Camaro made his quickest run of the day – a 3.606 – to defeat Daniel Pharris and his 3.607 in the final round. Pharris needed to win the race to win the championship. His teammate, Kevin Rivenbark, clinched his third Pro Boost world championship.

“This season was good at the beginning, we just couldn’t put one away,” said Weatherford, who appeared in two final rounds in the first three races of the season. “But we brought it home today. This year could’ve went a little better, but we ended on a good note. I can’t wait for next year because we’re going to win this championship next year. We’re going to win it, guys. We’re here to stay.”

Pharris, who won PDRA DragWars at GALOT Motorsports Park two weeks ago, qualified No. 2 in the ProCharger-boosted GALOT Motorsports ’69 Camaro. He ran a 3.636 to beat Dean Bettenson, then a 3.61 to hold off Chuck Ulsch’s 3.662. Semifinal opponent Kurt Steding red-lit away a 3.591 at 213.00, which is quicker than the current E.T. record, allowing Pharris to move on with his 3.613.

John DeFlorian went into the World Finals with a checklist of three goals: qualify No. 1, win the race, and record the first 3-second pass in class history. The Jerry Haas Race Cars shop foreman accomplished the first two goals and came impossibly close to the third. He leaves Virginia with the new Extreme Pro Stock E.T. record and the event win after running a 4.015 at 178.33 in the final round to beat Chris Powers, who secured the world championship in the semifinals. Powers ran a 4.047 at 176.24 in the other lane.

“We had a plan in place and we just wanted to try to execute it,” said DeFlorian, who was coming off a quarter-mile win at the NHRA St. Louis race. “Thankfully, we were able to execute it all the way through. We were low [E.T.] every single session. Every run down the racetrack we were fast. We came just a thou short of the 3, but I’m really happy. That’s a new record. And it’s a hard barrier. I can’t be any happier. I can’t do this without my wife, Liann, all my guys, Jeff Graber from Graber Concrete, and [crew chief] Brian ‘Lump’ Self. Lump being here was a blessing because it makes a difference having him on the grounds.”

Powers entered the World Finals as the points leader in his Chuck Samuel-tuned Sonny’s Racing Engines ’14 Camaro, but he had to fend off JR Carr and defending world champion Johnny Pluchino. Powers did his part by winning first round with a 4.061 over Dave Hughes, then second round with a 4.024 over Elijah Morton. He won in the semifinals on the starting line when Pluchino went red by .009 on a 4.069 to Powers’ 4.048. With Carr taken out by Pluchino in the second round, Powers secured his first Extreme Pro Stock world championship.

As a consistent late-round player, Chris Holdorf has been chasing his first official Pro Outlaw 632 victory all season with five semifinal finishes. The Florida native rose to the occasion at the final race of the season, though, as he and tuner Jeff Pierce put together a string of passes in the 4.10s to get Holdorf’s first win in PDRA competition. He won on a holeshot in the final round, running a 4.171 at 170.43 in his Nelson-powered Dewitt Custom Concrete ’53 Corvette to deny Amber Franklin her first win in just her second race. Franklin posted a 4.149 at 170.54.

“It’s about time,” said Holdorf, who unofficially won the 2020 World Finals, as the final round was completed at a non-PDRA event. “We definitely struggled all year and had some bad luck here and there. We finally got things to go our way. We were very fortunate that we caught a break in the semifinals. That gave us a boost into the final round and gave us some of the data we needed, then we carried that through. Hat’s off to my crew, Alan Reynolds and Carl Monkhouse, and of course, Jeff Pierce, as well as Mark Micke at M&M Transmission, Chris Nelson at Nelson Competition, Bob Book at BRE, and my family for giving me the chance to do this.”

Holdorf started the day as the No. 4 qualifier and lost traction on a first-round bye run after opponent Lexi Tanner lost oil pressure on the starting line. He bounced back with a 4.194 at 169.85 to beat Douglas Nicholl’s 4.217 in the second round. Semifinal opponent Daryl Stewart hurt his engine in the prior round, so Holdorf took another bye run – a 4.184 at 170.32 – to move on to his first final round of the season.

Franklin made her Pro Outlaw 632 debut two weeks ago and was on a mission to back up her runner-up finish there with a win at her home track. She qualified No. 2 in the Musi-powered “Jungle Rat” ’69 Camaro formerly campaigned by her father, Tommy Franklin, in Pro Nitrous. Franklin then locked into the low 4.10s, running a 4.143 over Sylvester Barnes Jr., a 4.132 over George Coleman, and a 4.145 to reach her second consecutive final round.

Tim Essick, one of the PDRA Pro Street class’s biggest proponents, closed out his season with a storybook weekend at the World Finals. He clinched the first-ever PDRA Pro Street world championship, smashed the class E.T. record, and ended race day with the event win. In the final round, Essick in his ProCharger-boosted “Brown Sugar” ’18 Mustang recorded a 3.913 at 192.14 – the exact E.T. he needed to back up his record pass in the semifinals. He was unopposed, as Ty Kasper wasn’t able to fire up for the final round.

“Winning the championship is the big thing,” said Essick, who thanked crew members and supporters Dan Whetstine, Timmy Savoy, Phillip Buckler, Alan, Michelle and Dawn, as well as Vince Fourcade for helping fix a rear center section issue. “It’s been a long time since I won a world championship. It means the world and I’m so happy to have a series to be able to do that in. We struggled a little bit earlier this weekend, but we made everything come together when it mattered.”

Kasper’s turbocharged Victus Sports ’05 Mustang was the second-quickest car in the opening round with a 4.056 at 193.40 to beat Jesse Lambert’s 4.069. He took the tree and broke the staging beams to win in the semifinals when No. 1 qualifier Nick Schroeder wasn’t able to stage.

In the Elite Top Sportsman final round, the winner was decided on the starting line, as 2021 world champion Tim Molnar went red by .013 in his nitrous-fed ’68 Camaro. Jeremy Creasman held on in his ProCharger-boosted ’12 Camaro and recorded a 3.856 on a 3.83 dial-in to get the win.

It was a race between a past world champion and the new world champion in the Elite Top Dragster final round, where 2019 champion Kellan Farmer squared off with 2021 champion Peter Maduri. Farmer’s quicker reaction time and 3.802 on a 3.78 dial-in in his ’21 Race Tech dragster gave him the win. Maduri made it a close race with his 3.729 on a 3.72 dial-in in his K100/Dynabrade ’17 Chrome-Worx dragster.

David Petrofske overcame a slight starting line disadvantage in the Top Dragster 32 final round to win the race, running a 4.155 on a 4.15 dial in his ’21 Precision dragster. Virginia’s Duane Allen broke out with a 4.185 on a 4.20 dial in his ’17 American dragster to take runner-up honors.

The eight-race 2022 PDRA season will begin on April 7-9 at the East Coast Nationals at GALOT Motorsports Park in Benson, N.C.