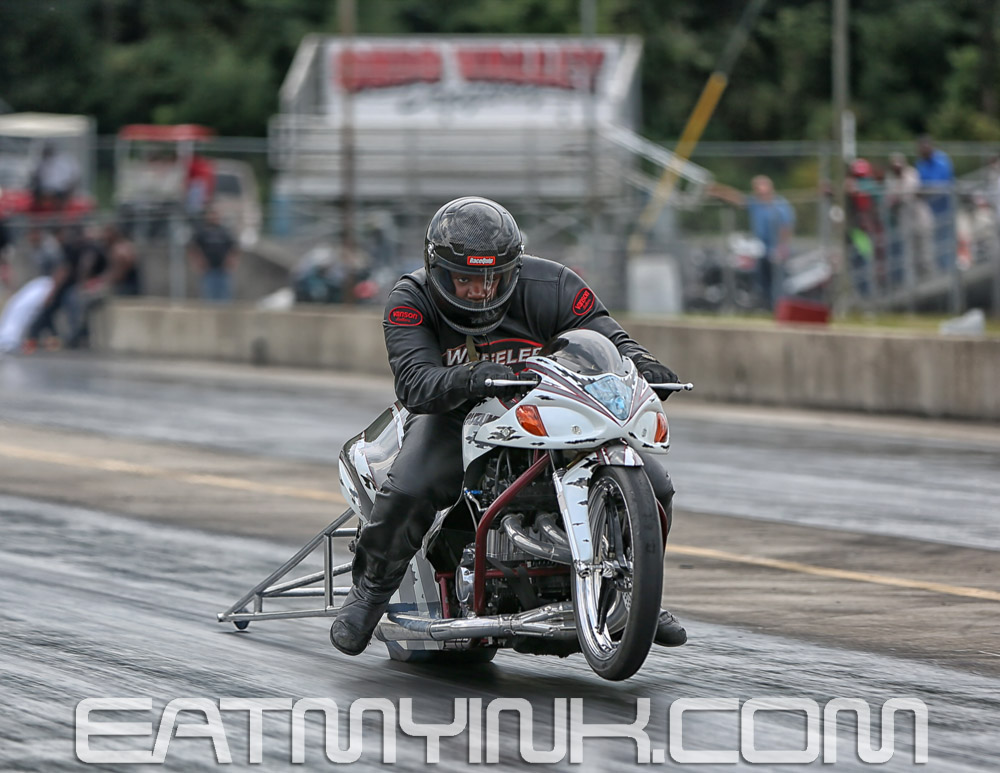 Midwestern motorcycle drag racing series NHDRO brought it’s racing family to a no-points Rally in the Valley race at Louisville’s Ohio Valley Dragway, and the weather couldn’t have been much more different from Friday to Saturday of the two day event. Friday was October coolish, dry and comfortable with a beautiful sunset. Saturday was overcast, muggy, typically swampy Ohio Valley with occasional sprinkles. Kawasakis seemed to do very, very well both days.

“I’m just happy to finally park my Top Gas bike in the winners’ circle,” said Rowe, referring to three years of ups and downs with his Kawasaki ZX14-powered dragbike. “Also proud of my teammates Evan and Eric Yost and brother Rylan for parking their bikes in the winners circle. Evan has never raced before April of this year and to pick up a win in his first season is an amazing feat.”

“The finals was a ‘Win-Win’ for me!” said proud Eric. “Either I was getting a check or I was going to be the proudest dad ever! Thanks to Evan’s coach Rashad Rowe for pushing him to greatness! Thanks to MedPro for his sponsorship. He knows now it takes a ‘Team’ to win! Congratulations son, I love you.”

Here’s an interview with Evan:

“Just happy I was able to get a win for my girlfriend on her birthday!” said Rylan. “Also, big shout-out to our camp as we took home several finals!”

Here’s an interview with Moran:

“We came and raced off the trailer, and the bike did exactly what it did last race,” said Erwin. “Can’t thank JTR (Jeremy Teasley racing) enough for all they do.”

Here’s a video of the class by Bird Man:

“The struggle is real running 800 pounds package to run the number,” laughed Louisville big man Sherrell. “Couldn’t do it without support from family and sponsors. Everyone from Ray Mancini at Extreme, David Liguori at FuelTech, etc.”

Dan McCarten topped his championship off with one final Grothus Dragbikes/Klemme Performance Motorcycles Pro Ultra 4.60 bike win for 2021, taking out number one qualifier Terrance Washington in a fantastic final round.

“While we sealed the deal on the championship two weeks earlier, we also sacrificed a few parts at the alter of speed in the process,” said McCarten. “A couple of calls to Mitch Brown at Monster Race Products and Billy Vose at BVR got the necessary transmission parts to me in record time to get the War Machine back in the game just in time for the last NHDRO event.

“I completely botched qualifying, running too fast dumping in Q1 and let the bike drift too far in Q3 and lifted, running way over the index. The math was on the money if it went straight.

“A couple of slight chassis adjustments and let’er eat in round one. Keith Nichols got out first but the ol’ Machine ran dead straight and made up the holeshot and got lucky, taking a .001 marginn of victory (MOV) running a .61 to a .62.

“Second lap, Deshawn Wheeler strapped a light on me—.015 also. All I could do was push because he was on a lick! Again, the bike saved my hide as he took too much stripe and broke out.

“The finals against Terence Washington was epic. Yeah, I got drilled again, but only by .01 this time! It took 600 feet to make that time up as we went gear for gear, wheel to wheel. I swear we made eye contact in the traps and both of us said ‘NFW am I lifting!’ In a double breakout, Terence runs a 4.594 to my 4.597, MOV .01. Balls to the wall out the back door baby FO60 style!

“Thanks to Brain and Niki Welch (of NHDRO) for one more swing for the fence in 2021.

“He’s made a lot of money with that bike,” someone said at the starting line as Hoke’s winlight came on.

“Well, I don’t get to run the bike as much as I would like due to racing cars,” noted Hoke.

“Friday I knew I was going to have to figure out a way to slow the bike way down to try to qualify good, so I shifted the bike at 10500 on a guess and first pass it went a 5.61. I knew I could work with that?

“Getting back to the pits, CJ Decker was shaking his head and saying ‘That’s what years of experience will do for you.’ I let CJ ride the bike in the Road Course Shootout and I end up drawing him first round of that race on my other bike, so he knew that I had to figure out a way to slow the bike down to a 5.60?

“The only problem, shifting it at 10500 was doing something to my autoshift with the RPMs down that low. My next pass, as I was staging the bike, it shifted into third gear on the starting line. Luckily I caught it and shifted it back down to first. When I got back I turned the autoshift off and button shifted it the rest of the race. I knew I wasn’t going to be near as consistent that way. I knew I had to tree everyone I was running and try to take the finishline by a wheel or so. With a little luck it worked out as planned!”

“Rolled in Friday night with the ‘Gangster’ and ‘Untrainable,’ AKA my Top Gas bike! Had the same setup from Norwalk’s track and found out real quick that won’t work at Ohio Valley’s track. Made some changes and was able to win Pro ET and was almost in the finals of Top Gas. Was -.001 red for a bye in to the finals of Top Gas!

“So had a great weekend and a lot of fun. Plus I had my lucky Eatmyink shirt on! Like to thank my buddy Dan Rudd at MPS, Kathy, Tim and Teri and, as always, Mac! NHDRO ROCKS.

“They say how much longer you going to race and that one is easy—as long as I can win!”

Some serious rain moved in just after winners’ circle photos. There were hours and hours of VooDoo Grudge racing time left on the schedule, but I pretty much had photos of most of the Grudge bikes already and decided it was time for me to load up on fried seafood at the Louisville legend on the banks of the mighty Ohio—Mike Linnig’s.

As other series announce their schedules, it will be interesting to see what Brian and Niki Welch come up with for 2022. Where would you like to see NHDRO race?

Here are the results sheets from the weekend:

story, photos, and videos (except for the Bird Man joint) by Tim Hailey