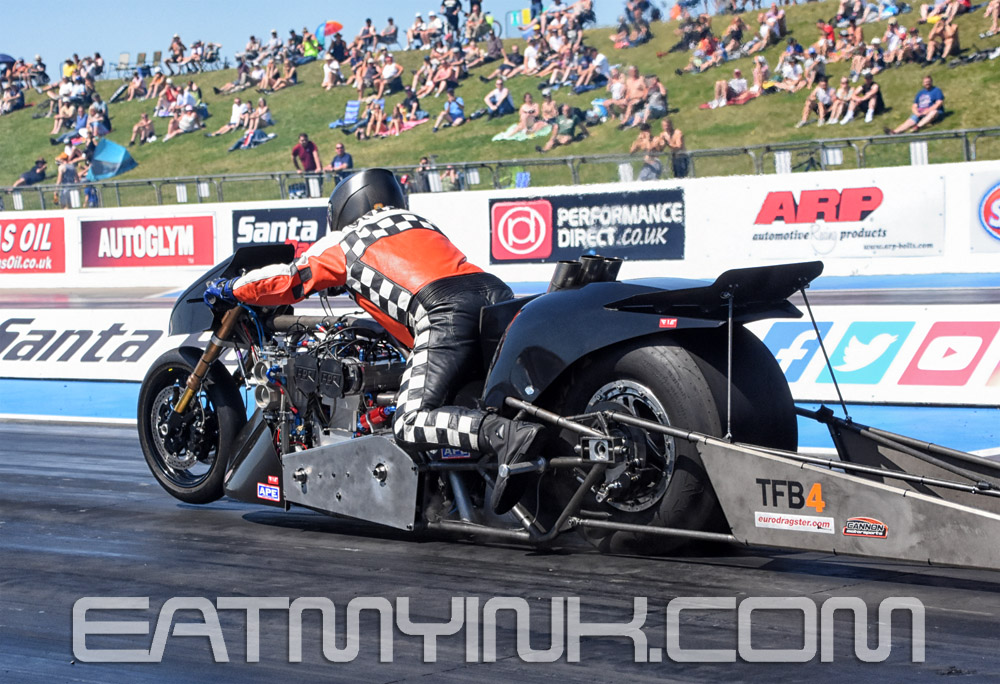 The SummerNationals were blessed with something that is not a given at Santa Pod in the summer—hot sunny weather over the two days, with temperatures ranging between 85-90 degrees. Summer-like.

New records were set once again and many racers ran personal bests. There was a test day, the day before the event started.

Reigning ACU Top Fuel Bike Champion Steve Woollatt has had various issues so far this season. Still having a clutch problem, Woollatt managed to qualify in number one spot with a 6.563 at 204.25 mph.

Festival of Power winner Neil Midgley struggled. In the first qualifier he had low oil pressure, then ignition problem traced to a weak coil, and eventually ran 6.795-101.

Coming into staging, a belt broke on Woollatt’s bike and Smith took the win with a 6.942. His last ACU Top Fuel Bike win was at the 1996 Easter Thunderball meeting.

Stuart Crane once again dominated Funnybike at the event ran and 6.470-207.99 out of the trailer, which were career personal bests and unofficial records. In the second session, Crane took ignition timing and clutch out and ran 6.500-207.02 to set new ACU ET and speed records.

Kevin Osman was struggling to get off the start line to the 60 foot. The team thinks it was an electrical glitch, but the top end power was there, running around 180 mph. Osman ran 8.602-180.69.

Davies had a bye to the semis. With Mills a no-show Kenway had byes to the final. So the only race in round one saw Neary run a personal best of 7.738 to beat Hambridge 9.681.

There was a shock in the  semi-final when Davies went before the tree. The bolts had come loose in the clutch basket and the clutch dragged Davies through the beams.  Meanwhile Neary ran another p/b 7.718.

Both finalists were in their first ACU final. Neary continued his good form taking the win 7.748 to Kenway’s 10.336.

Reigning ACU Super Street Bike Champion Steve Venables was on record pace during qualifying with a speed of 217.17 as he topped the field with a 6.988 in qualifying. Mark Hope was his nearest challenger at 7.150-205.32.

Mark Dainty did some testing and damaged his motor and transmission, so he worked till midnight fitting a spare motor/trans ready for qualifying. He then ran a personal best of 7.174, just edging Stephen Mead’s 7.186-206.27.

Outside the show was Graham Dance, who damaged his cases and was out of competition. Also Len Paget, who made his Super Street debut (on a bike that used to belong to a guy whose old turbo system company still owes the owner of this website money) with a 9.615-146. And Steve Wood had clutch issues and ran 9.896.

First semi and Morrison Jr. wasted a 7.074 when he redlit against a tyre-spinning Venables. In the other semi, Dainty won on a holeshot against Mark Hope’s 7.457 to a quicker-but-losing 7.401.

Joe Elliott ran back-to-back 8.74s to beat Jasmine Cordelle and Rawnsley to face Roe in the final. Roe took the winlight in the final 8.644 to 8.720.

Philip Harrison was the number one qualifier with a 9.552, knocking Martin Hallett’s 9.595 off the top spot.

Robbie Dobbie did some testing and ran three 9.93 passes. Jayne Kay ran a personal best of 8.88. Blade King had a lucky break when smoke poured out at the top end.

Louis Davies’ team found only ½ litre of oil in the motor, so dad Ollie went and got his Snap-On tool box and rode his moped up to the Davies camp, tool box resting between his legs (good bit of riding).

Harrison lost to reigning champion Phil Pratt in their semi-final. In the other semi, Dobbie beat Dave Grundy.

Pratt won the event when Dobbie broke out.

What a debut meeting for Annie Wallace. She completed her Pro Mod license run in the first qualifying session 6.876-208.94 personal best figures and getting quicker and faster every pass, finally qualifying in number three spot with a 6.240-224.46.

Round one and Webster broke against Wallace with another p/b 6.233-226.72. Davies beat Wayne Nicholson.

The final turned into a solo for Wallace after Davies’ fuel pump broke. Wallace turned the wick up and won her first Pro Mod UK event 6.133-239.31.

Jedd Guy has been the Outlaw Anglia man to beat recently with his current form, and at the SummerNationals he was top again with a 7.049.

Ben Kennedy broke a rod the previous weekend at Dragstalgia and had a new motor for this event. First pass he had a huge wheelie off the start line, then ran a personal best of 10.052-133.66.

Semi-final and Millar led from start to finish against Taylor 7.122 to 8.384. Kennedy was shutdown in staging for a fluid leak.

Guy faced Millar and spectators were hoping for a great final, but Guy broke after his burnout so Millar soloed to the winners circle.

Phil James was the Wild Bunch number one qualifier followed by Pete Brown. Andy Clifford ran a personal best of 8.944.

Bob Hawkins was still having engine problems after fitting another magneto, but ran after the first round of eliminations with a great 6.622-202.