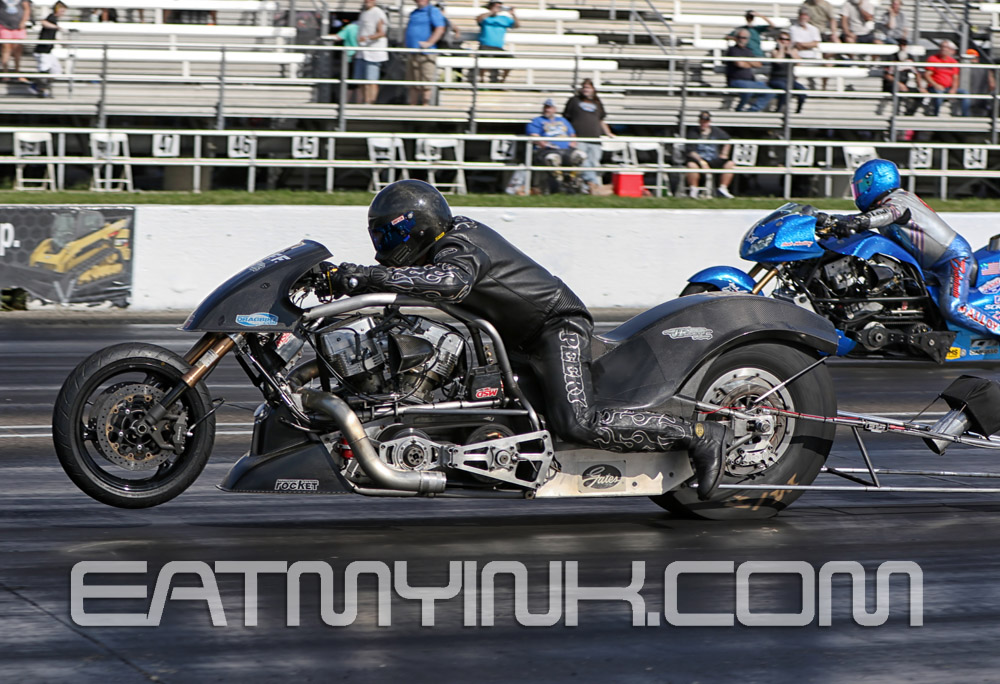 Like all the pro classes, TFH had one hit to make the field. This was not unexpected given the weather forecast, so it was Stand and Deliver right off the bat on Friday.

Billy Jack and Tim Kerrigan didn’t make the cut—which must have been especially hard on Kerrigan, whose TKR & Associates sponsored TFH at this event.

Then a brutal first round of eliminations ended with only racers who’d never won an NHRA TFH race before left in—Peery, Tyler Wislon, Chris Smith, and Bob Malloy.

First round losers included the last five champions. Reigning champ Randal Andras blasted his airhorns to the grandstand, leaving the door wide open for Peery to advance with a 6.59 at 214 after giving up the tree by .028.

Samson Exhaust racer Tii Tharpe gave Wilson a massive .082 starting line advantage, then spun in the same right lane that was problematic for many classes all day. Tharpe attempted to give chase but Wilson won with only a 6.86 at 179.

Malloy set the NHRA record here last year, so his win over Jake Stordeur was no surprise. Bob qualified number two but wasn’t confident about what his bike had to offer on this particular weekend. His 6.98 at 205 would have been vulnerable had Stordeur not redlit by -.008.

I woke up on raceday thinking this would be Jay Turner’s day. It was the 25th anniversary of Top Fuel Motorcycle legend Elmer Trett’s fatal accident here at the Nationals, and as I put my Elmer shirt on for the day, I was thinking about Turner. Trett was Jay’s idol, and he can get very emotional when talking about the late nitro master.

Turner—the number one qualifier—gave up .060 to Smith at the tree, but pulled a full .050 back in the first 60 feet. But about 100 feet later, Jay’s bike dropped a hole and he could only putter behind as Smith moved on.

Having lane choice all day was certainly a benefit for Peery, who was able to stay in the left for the semi against Malloy. Peery improved a tenth for the win while Malloy struggled.

Ryan gets a lot of support from Jay Turner Racing, but Tyler was the last actual JTR team bike left. Renting from JTR is not exactly like any other situation where you’re paying for a service. JTR is a demanding operation, and riders are ridden hard by Turner and Mike Lehman when they underperform.

When Wilson ran a 7.0 at only 152 in qualifying, Turner and Lehman were waiting for him “He didn’t know which way to look,” said Tyler’s wife Stacy. “Jay was on one side and Mike on the other.”

“Mama! Mama! Where’s the finshline?!” Tyler said they shouted at him, and the former Pro Dragster champ admits he’s struggling to keep his head down and the throttle twisted for the full 1320 on the big TF bike.

And that’s pretty much what happened in the final. With his chute grabbing wind, Peery slowed to a 6.69 at 196 for the win while Wilson crossed the line at only 159, admitting that he’d backed off the throttle.

Wilson will break through this. He’s a big, strong, motivated guy. He’s shopped around at a couple of teams and has settled back at JTR, where he might get more abuse but he knows that he’s getting pushed to win. And he also knows that this is a U.S. Nationals that he could have won.

Peery, on the other hand, is always firmly in his comfort zone—running similar numbers at every track all year long and stepping up as needed. That’s worked for wins at AHDRA, and this time worked at Indy.

Here’s an interview with Peery:

Wilson was unable to make the Maple Grove race this weekend, but Peery is here and sitting fifth in a seven bike field after one round of qualifying, with beautiful weather for two more rounds today. He had his motor apart Friday night, conducting routine maintenance.

Jay Turner leads Maple Grove qualifying, as he did at Indy. He ran a 6.44 at 206 this weekend at MG. He’s followed by teammates Randal Andras and Tii Tharpe. This week Tharpe is riding the bike that Wilson rode last week at Indy.

Rich Vreeland sits comfortably in fourth, happy with a new set of cams despite shutting off at 1000 feet. Here’s an interview with Rich and his brother Ray about that:

John “JT” Toth is sponsoring the class this weekend, celebrating his 60th birthday. He’s currently 6th in the order.

So far, the only thing making this weekend better than last for Billy Jack is that he WILL qualify. He is seventh and last in the field after a dramatic blow up, but is borrowing a bike for the rest of the weekend.