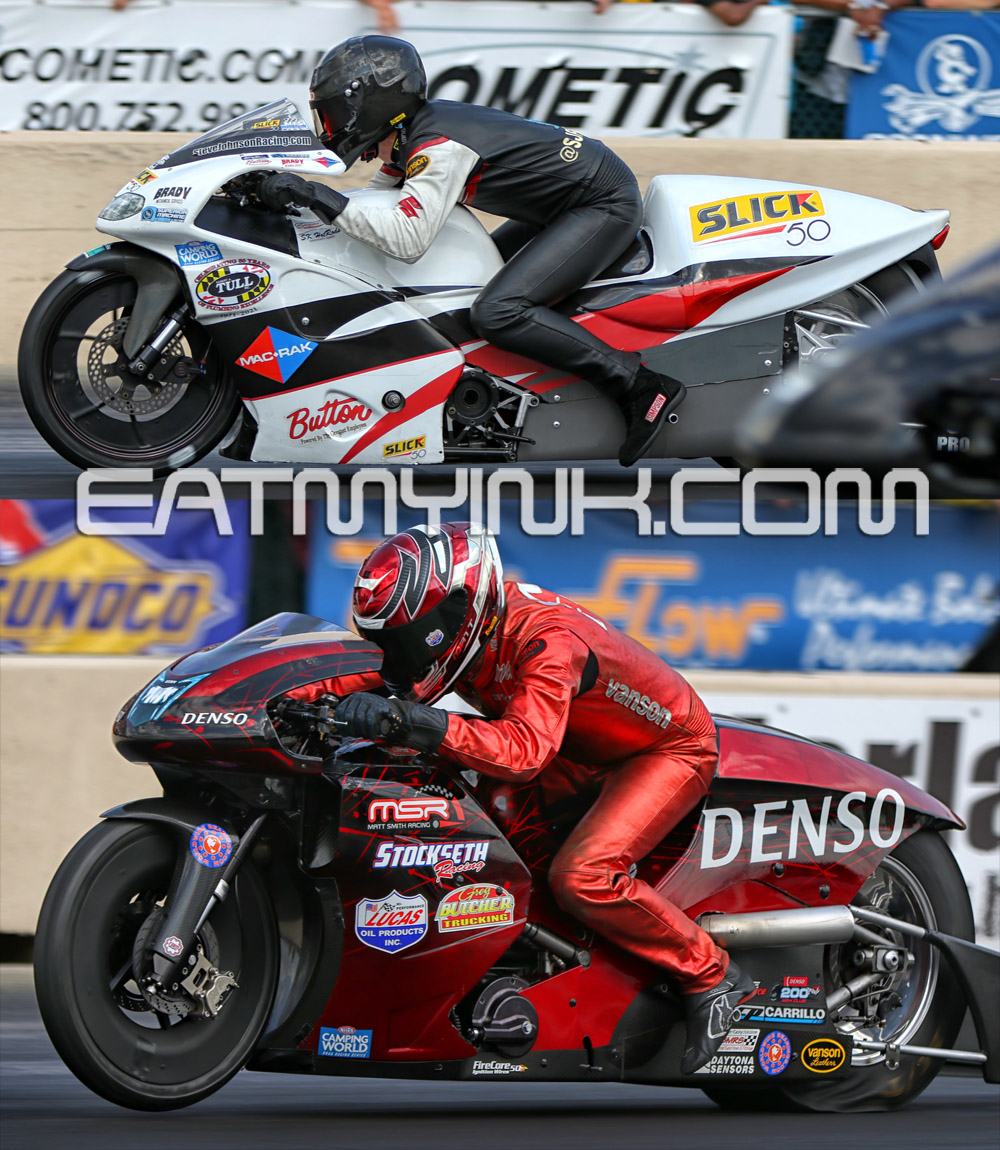 This year could well be remembered as NHRA Pro Stock Motorcycle’s wildest year ever, for so many reasons. Heading into the Norwalk event at Summit Motorsports Park, the class had four different winners in four events—two by Matt Smith Racing (MSR)-built S&S V-Twins, one with a Brad Oehler-built S&S V-Twin, and one by a Steve Johnson Racing-built Monster 4-valve Suzuki.

The thing everyone will remember about Friday night, though, is Kelly Clontz going down in the shutdown area. You’ve surely seen that video in the Eatmyink Facebook Group.

Here’s an interview with Kelly and her husband Chris about the crash:

Charlotte 4-Wide winner Steve Johnson rose to the top on Saturday to secure number one for the event with a 6.789 at 198.44—the fifth career top qualifier for the veteran and also the quickest pass in Norwalk PSM history.

I found Johnson on Saturday evening in his trailer with Monster 4 valve parts—Web Cams, valve springs, etc—all getting scrutineered so that he may better understand wear cycles and develop a maintenance routine around this major upgrade to his program—already blessed with both power and reliability.

Johnson pointed out that swapping to the 4V has been very straightforward. “We took the two valve top end—which is for sale—off and put our four valve on it,” said Johnson. The new head required different pistons, naturally, and he’s recently added a Liberty transmission. “It was all Vance and Hines lower end and we just put the 4V right on.”

Sunday’s eliminations at Norwalk could be seen as two separate racedays—the first two rounds before a big rain delay and the two rounds after.

Matt Smith and Ryan Oehler were the last pair down the track before—or as—a dark and threatening wind and rainstorm unleashed on the Disney World of dragstrips.

Andrew Hines ran off the end of the notoriously short track the previous pair, and Oehler was feeling as dark and scary as the clouds moving in from the West. “It got me when Andrew drove off the end of the track. That kind of fucked up me up a little bit,” admitted Flyin’ Ryan, who nearly did fly when he hit the top end winds.

“My game plan was, there was gonna be a torrential downpour in Matt’s lane,” laughed Oehler. “But Matt was laser and I wasn’t. I didn’t have a great 60, then missed the shift button from the two to three shift, two or three times maybe—something like that. Laid on the limiter. Then pulled in the clutch at 6.91 because I was over by the wall. And then that was a mistake pulling in the clutch lever. I was like, ‘Oh, fuck,’ and then I had to carefully let the clutch lever back out while it was raining in the shutdown.

“Matt was squalling the tire next to me, and we both about drove off the end of the track and all the safety people were running for cover. We both were like ‘What the fuck?’ Everyone ran because there were like 40 mph winds down there.

Back at the starting line, Johnson and Matt’s wife Angie started up in the waterbox. The wind was practically a full-on gale now, and I’m watching about 40 wrappers and associated trash blow on to the back half and start swirling around between the walls and I’m thinking “Are they really going to send these bikes down the track right now?!”

I later asked Johnson what he was thinking of at that moment, and this was his answer:

They shut Steve and Angie off, the skies unleashed, and a few hours later we had an entirely different race. Nitro was run first, followed by Steve and Angie, putting the bikes out of sync with the other pro classes. Angie took the tree .024 to .050, but Steve drove around for the win.

Matt read the weather and its effects on track conditions correctly. His 1.06 60 foot time from round two of eliminations would be his worst for the remainder of the day.

“The rain delay played into our hands,” said Matt. “I knew I had a shot to go for it, and we did.

“The wind had died down a little bit and I was like, ‘Well, we don’t have the big tail wind.’ But it was cooler, and I noticed the track was better, ‘cause it definitely improved from second round to the semifinals to the 60 foot.”

“And it went 1.05, I thought ‘Well, we might have something here,’” said Matt. “I said ‘You know what? I’m gonna throw some clutch in it, turn the two-step up, and if it sticks, great, if it doesn’t, then we already got second place, so it doesn’t matter. Some people may not approach it like that, but I’ve already won second place. That’s the worst I can get, so I kind of go for it.”

When asked what slowed him down in the final, Johnson replied “Just the driver and the crew chief,” referring to himself in both instances. “I rode bad and I didn’t make a good clutch call. I just made a mistake.

“But as our little team is moving forward, we struggle with short turnaround times. And I said to Jock, I said, ‘Well, how the hell did they (MSR) get ready so fast?’ And he says, ‘They got a team of people over there, man, for four motorcycles. So one of them’s in the final, what do you think all the people are doing?’”

The final is always an incredibly quick turnaround for the bikes, because of going last in the semis and first in the finals. That’s always a problem, and it’s just the way it is. “That’s one of the presents that you get (for getting to the final), I guess,” said Steve.

It worked for Johnson at the Charlotte 4-Wide in May, where he beat Smith, Karen Stoffer and Joey Gladstone in the final. “But I had my own little team of people at that race,” said Johnson. “I had four people. But not full time, you know. Matt’s got a really good team that has gone to the finals before, and they’ve had both bikes in the finals, so they all know what the Kool-Aid tastes like and smells like. But we’re all right. We’ve just, got to get better is all.”

And he did have an additional crewman at Norwalk. “We brought a guy named Glenn Dalton in, who added a third a third piece to our pie and really, really, did a lot. Really helped Jock a lot.”

Johnson is making good power and 90% of the time he’s making good tuning choices. “Well, there wasn’t a lot to do,” the humble Alabaman said about tuning at Norwalk. “I didn’t do much. I just, what’s it called? Wash, rinse, repeat?”

“In my opinion, they probably didn’t think the track was going to be that good,” opined Matt. “And I bet they pulled some clutch out of it from where they were, ‘cause Steve’s got a lot of tire speed. And I’m gonna say that the track was too good for the way they were running their bike, and it just bit him in the finals, and that’s why he slowed up.

“We had a good weekend. We qualified all four bikes in the top half of the field.

“With Angie’s bike, we’re still are having problems getting her bike to 60 foot. I don’t know if it’s a tire, I don’t know what the issue is with it. But we’re gonna try to make some changes, and try to go test before we go to Denver.

“Last year, we ran good at Denver. I was number one qualifier, she was number three qualifier. So we’re gonna try to put those same packages back in there and see if we can go out there and do good.”

John Hall’s MSR bike was running good, and he was down on himself for not doing his job. Hall was having a crisis in confidence Saturday night after making some mental errors in qualifying. “I’m not good enough for this bike,” said John, who qualified seventh on the back of his Friday night 6.90.

But Sunday was a different day, and Johnny Balls was back. He drove around Jerry Savoie after giving up .010 at the tree in E1. Hall jumped to a .009 light in E2, but his 6.89 got beat by about three feet by Krawiec’s 6.85. “He recovered, but there was still a little bit more left in it,” said Matt. “He went an .89, but he should have went .87. He’s picked up a couple of bad habits from the 4.60 bike he rides over at XDA, like getting on the two-step too soon. Sometimes you just got to remind people when they don’t come to do it (race PSM) all the time.”

The other MSR bike was the purple one of Atlanta winner Scotty Pollacheck, who qualified ninth with, I’m told, a Gen1 motor. Scotty redlit by a whopping -.217 in E1 against Angie.