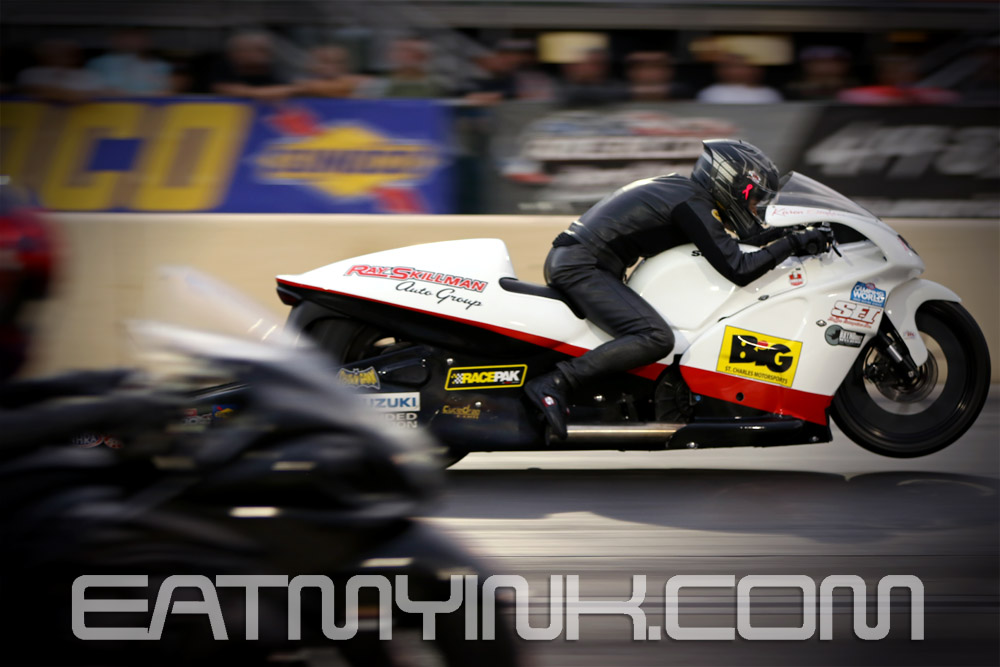 Pro Stock Motorcycle racer Karen Stoffer capped off a resurgent weekend for the White Alligator Racing (WAR) team by taking out Andrew Hines in the final round of the NHRA Sonoma Nationals with a run of 6.798 at 197.36 on her Ray Skillman/Big St. Charles Suzuki. Behind by only .003 at the tree, Hines hung right there but never got around, running a 6.800 at 200.98 mph after holding the performance advantage all day at Sonoma Raceway.

Stoffer won on the WAR Suzuki in 2019, but took the entire 2020 season off. This was her 10th career win and her first in Sonoma. Karen beat Scott Bottorff, Joey Gladstone and her teammate Jerry Savoie to advance to the final.

“Winning in Sonoma is (was) definitely on my bucket list,” Stoffer said. “I kind of call it my home race because I raced Division 7 so long and I was a Division 7 champion. This is definitely a moment I will always remember.

“This WAR team, they gave me a good bike and I said earlier we could go toe-to-toe with everyone. It was a really good race with Andrew, but our bike is phenomenal and it’s an honor to ride it.”

Interestingly, Stoffer’s bike has the 2V Suzuki while Savoie’s has the V&H 4V. Both bikes qualified well and raced well in round 1, but I’m told the gas cap was left off of Savoie’s bike in the semi.

Hines, who was provisional No.1 on Friday, advanced to his 99th career final round and first in 2021 with victories against Ryan Oehler, points leader and defending champ Matt Smith, and Cory Reed.

Matt’s bike bogged badly with a new tire for Round 2. Wife, teammate, and No. 1 qualifier Angie Smith had a transmission failure against Reed the same round.

Angie capped off a wild, record-setting Saturday of qualifying by earning her first career No. 1 qualifier with an impressive run of 6.736 at 203.06 on her Denso Auto Parts EBR. Smith’s run came during the final qualifying session after watching her husband, Matt, take the top spot and make the fastest run in class history with a pass of 205.04 earlier in the day. But Angie answered with her strong pass to close out the day.

“It is so tough out here and for me to be No. 1, I’m so proud of this Denso team,” Angie weeped. “We did a motor swap in 30 minutes on my bike and I was pretty bummed after the last round. To go my career-best, to go 203 (mph), I couldn’t be more proud of this entire team. Everyone that helps us, I couldn’t be more proud to give them a yellow hat as the No. 1 qualifier.”

Steve Torrence kept his hopes alive to sweep the Western Swing, powering to the Top Fuel win. Torrence, the points leader and three-time defending world champ, ran a 3.757 at 327.98 mph in his Capco Contractors dragster to squeak past Leah Pruett in the final round by just .002.

It gives Torrence his third straight win, and second in a row during the Western Swing. He’ll head to Pomona next weekend and try to become the eighth driver in NHRA history to sweep the Swing and the first since 2009.

To advance to the final, Torrence had to get past Cameron Ferre, Doug Kalitta and Antron Brown. He then narrowly beat Pruett in the final round after she ran 3.768 at 323.04 in what was a thrilling side-by-side race to claim his sixth win this season and 46th in his career.

“I went up there and was a little antsy on the tree and just got away with it,” Torrence said. “I did everything possible to screw that final round up. These Capco boys are unbelievable and I’m just the fortunate guy who is blessed to drive it. They work hard and just love their jobs. It’s so much fun racing here, and we’ve still got our hopes alive to go sweep the Swing and we got it done today.”

After struggling for most of the 2021 season, Pruett enjoyed a breakout weekend, advancing to her 17th career final round and first this year. She knocked off Justin Ashley and No. 1 qualifier Brittany Force to meet up with Torrence.

“I think the most impressive thing about this weekend is our progression from last weekend at Denver,” said Leah. “These Top Fuel cars don’t necessarily have a full reset button, but that’s what we did as a team this weekend. We dug deep and found some issues and ultimately, we had great progress this weekend.

“To have such a consistent car from qualifying into eliminations and to put down what we needed to in the semifinals to get lane choice was great to see. We have a very conversational car that listens to us right now. The team is thriving.

“We didn’t have the start to the season we wanted, but this is a marathon of a year and this is the momentum we’ve been searching for. For Don (Schumacher) to give us the patience and resources to do what we needed to get here has allowed us to open possibilities. It’s great to win rounds and get to the finals. It was a very close race.”

Robert Hight’s dominance at Sonoma Raceway continued on Sunday, as he won at the facility for a third straight time, delivering a run of 3.971 at 322.50 in his Auto Club Chevrolet Camaro SS to beat defending world champ Matt Hagan in the final round.

The win furthered Hight’s run at Sonoma, gave him two victories this season, 53 in his career, and ended Hagan’s chances to sweep the Swing. Hagan was quicker off the starting line, but Hight—who beat Steven Densham, J.R. Todd and No. 1 qualifier Ron Capps to reach the final—chased him down at the finishline, winning by a mere 15 inches.

“I just had a lot of confidence in my team,” Hight said. “I just needed to have some confidence in myself. It’s pretty tough out here in Funny Car and you have to be on your game. I think we learned some things this weekend and you’ve got to rise to the occasion.

“It was 1988, the first national event ever here, that’s when I fell in love with this sport. It’s hard to believe it’s been this long and that I actually get to stand here and do this. When I first saw these cars run, it’s all I wanted to do. Amazing.

“When I first started racing, I would come to Sonoma and I couldn’t do anything. The last three, we’ve dominated and it’s been a lot of fun. It’s been an unbelievable weekend and we’re headed to Auto Club Raceway now.”

This win put Hight past Joe Amato on the NHRA all-time win list. “I can’t even believe that’s possible because Joe Amato for the longest time was the winningest Top Fuel driver. Race wins, round wins. He’s since been passed by Larry Dixon and Tony Schumacher but watching him all those years he just dominated Top Fuel. And to say I have more wins than he does, that’s almost not even believable.”

Hagan reached his second straight final and 68th in his career thanks to round wins against Jeff Diehl, Blake Alexander and Alexis DeJoria.

“Our guys are doing just a phenomenal job,” said Hagan. “This is really the most confident I’ve felt with a group of guys in a long time. They’re killing it. They’re making super-quick turns in between rounds. We’ve got some really good juju going on. The group is clicking so well, Dickie (Venables) is making great calls out there.

“I see us ticking off a few more wins real soon. This Hellcat is running great. We’re qualifying well and going to the finals. It’s there. The confidence is there. The team is there. My lights are good. Everything we need to win races and a championship is right there with this package. I’m very excited and pumped up.”

Tim Wilkerson’s full racing skillset was on display this weekend. It was one of the toughest weekend’s for the driver, crew chef and team owner from Springfield, Illinois, as he battled tough qualifying conditions on Friday and Saturday followed by a Sunday that stretched his team’s abilities to the their limits.

In the second round of qualifying Wilkerson scuffed the wall, disqualifying his run and sending the veteran driver and crew chief to the final qualifying session needing to step up the performance. Wilkerson and his team rose to the challenge making their quickest run of qualifying and jumping from the bottom half of the field to the No. 7 spot with a 3.997 second pass—the third quickest run of the session.

Heading into race day Wilkerson and the Levi, Ray & Shoup Summit Racing team faced Jim Campbell and his Jim Dunn Racing entry. Wilkerson took off and was on a great run when his race car started spinning the tires and his engine was dropping cylinders. He worked the throttle to keep his momentum moving down track but the engine let go, erupting in fire before the finish line. The experienced driver was able to get his Mustang Funny Car safely stopped and he picked up an expensive but important round win.

Between the first round and the quarterfinals Wilkerson pulled out his back-up car and readied it for a race against Alexis DeJoria, the No. 2 qualifier, and recent Mile-High Nationals finalist. Both race cars had issues on the run and Wilkerson was not able to get a second win light on Sonoma Nationals race day.

“We had just about everything happen to the team this weekend,” said Wilkerson. “I have to hand it to my guys because they busted their tails every day to give me a great race car. Things didn’t go our way and I am just going to put this race behind us and focus on Pomona.”

Aaron Stanfield won a duel of young guys in the Pro Stock Car final round, slipping past rookie Dallas Glenn with a run of 6.557 at 209.56 in his Janac Brothers Chevrolet Camaro. Glenn posted a .016 reaction time to Stanfield’s .020, but the Elite Motorsports driver had enough power to drive around.The close win gave Stanfield his second victory in the past three Pro Stock races and third in his career.

Stanfield raced past Chris McGaha, Matt Hartford, and No. 1 qualifier and points leader Greg Anderson to reach the final round.

“Every run is really important and the guys did a great job with the hot rod today,” Stanfield said. “I felt like I was driving halfway decent and they were giving me a great racecar, and everything always has to come together to win in this class. Today, it came together and I have to thank everyone at Elite. All the guys that work so hard and the people who support me, they let me come out here and do what I love. It was a good day. It was a tough lineup to go through and my guys did a great job.”

story by NHRA and team reports with Tim Hailey additions and editing. Photos by Hailey, videos by NHRA