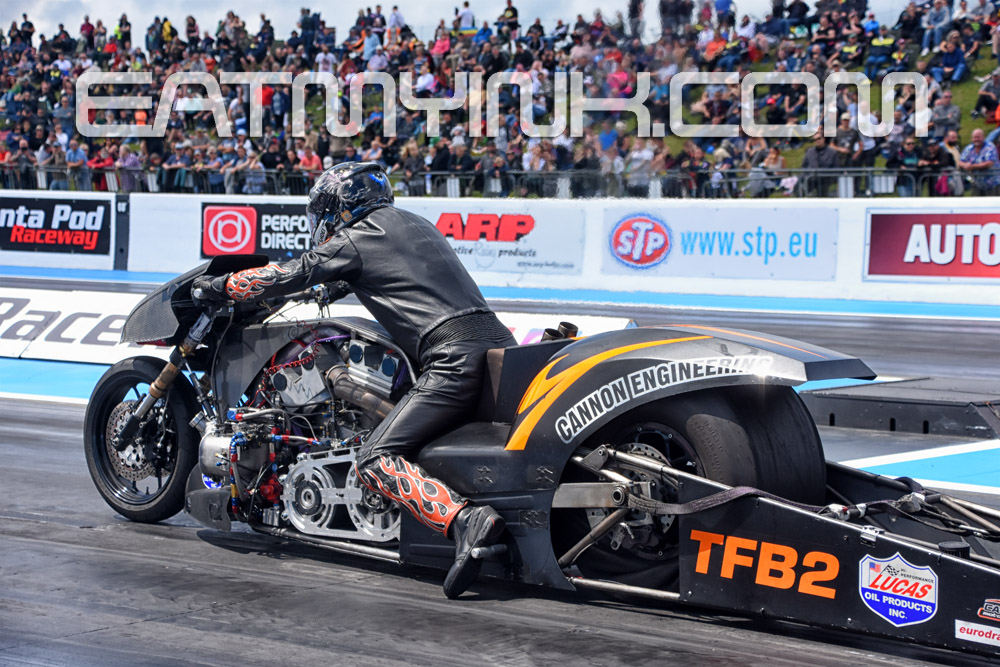 Round two of the ACU Championships—AKA the Festival of Power at England’s Santa Pod—was blessed with a tailwind for three days. New ET and Speed records were set and many personal bests (p/b) recorded.

Steve Woollatt suffered from a clutch issue, which affected his 60 foot and 330 foot times, but he was number one Top Fuel Bike qualifier after day one with a 6.455 at 199.01 mph.

But Neil Midgley (featured photo) ran a personal best of 6.284-198.98 aboard the Cannon Engineering bike on day two to top the field, but had a cylinder head and piston damaged.

Al Smith had a misfire and the team thought it was fuel related. They changed the fuel set-up and compression on the blower and  when they fired it up, they found the problem was a magneto. With no spares, they did a temporary repair with a 3/8 bolt and grind it to a tip. Warmed up the motor and it was fine and ready for raceday.

Allan Davies damaged the bottom end on the V Twin Puma and was out of the show.  Nick Milburn had various issues with his cylinder head, which could not be repaired at the track.

Woollatt put a holeshot over Smith in the other semi, but slowed at ¾ track. Smith’s motor had an issue with the magneto at mid-track, but he got to the line first with a 7.324 to Woollatt’s 8.538. Midgley broke the beam to get in the final.

Smith was a no-show for the final, leaving Midgley to solo to his first ACU Top Fuel Bike win. Midgley put on a show and ran a 6.465 at a personal best 202.56.

Stuart Crane dominated Funnybike, qualifying number one with a new ACU ET record of 6.492 after fitting another cylinder head after the first one was damaged during testing on Thursday.

Len Paget was once again qualifying his Pro Stocker with a 7.504 at 173.03, just ahead of Tony Clark who ran a personal best 7.589, but in the next session an exhaust valve broke on the burnout.

Lorcan Parnell failed to qualify due to various issues during the six sessions. He did get a pass of 6.7 seconds, but he left before the tree started.

Round one of eliminations and Crane eased past Lukes with a 6.541 to Jiri’s best of the weekend—an 8.458-157.93. Paget redlit against Peters and Osman had a bye when Clark was a no-show. Crane had a bye to the final.

In the other semifinal, Peters ran his best with a 7.518 against Osman, who struggled to get off the start line.

Louis Davies knocked 2/10ths off his personal best on the first day of Comp Bike qualifying and broke the ACU ET record—which has stood since 2002 by Phil Brachtvogel—with a time of 7.026 and a personal best speed of 184.39. The following day he damaged a piston. The team put in new valves and piston and worked till 10:00pm, finishing off on raceday.

Another making headlines was Sean Mills, resetting his ACU speed record to 198.02 during qualifying.

Super Street Bike put on a fantastic show for the fans over the weekend, resulting in the quickest eight bike field in the ACU—7.355—and quicker than FIM Championship of 7.589.

Newcomer Alan Morrison Jr. ran some stunning numbers and qualified in the number 2 spot with a p/b of 7.022-199.89—quickest the Rick Stubbins-tuned bike has run.

During staging in the semi-finals, Venables’ wastegate pipe came off, giving 40lbs of boost for launch. Luckily Venables noticed and came off the throttle quick, but Mead went to the final.

So could Morrison Jr run his first six-second pass? The answer was no, but he did win his first ACU Super Street Bike event with a  7.028 to Mead’s 7.115.

Alan Morrison was the 8.50 number one qualifier with an 8.503 with Stephen Howe his closest challenger at 8.523.

Wright beat Reed on a holeshot in round one and Hall in the semi-final. Sawatzki beat Outlaw Anglia Champion Scott Crookston, now riding in 9.50 bike, then beat Hallett on a holeshot 9.636 to Hallett’s 9.631.

Wright won the final when Sawatzki broke out with a 9.488.

There were some personal bests. Blade King ran 8.991 but destroyed the clutch. Jonny Young ran 10.06 and then 9.964 in round two against Matt Jones, who recorded his first nine second pass with a 9.940 in the previous round.

Jones met Pratt in the final and it was Pratt who took the winlight.

Steve Ashdown ran 6.032 but broke his rear axle on the third session and was out. Kevin Kent damaged a blower and had traction issues. Jason Phelps didn’t get on the track, with various problems with the car.

Among the Nostalgia Funny Cars, only Andy Raw in the VW Funny Car completed four runs—the quickest in round one at 5.737.

Tony Betts has an ex-Graham Ellis chassis and a new Camaro body and rear end. The team has various issues and missed some sessions, but ran 5.532 in the third session and 5.524 in the fourth.

Kev Slyfield broke a rocker mount and had to go back home and machine a new one, and got the engine back together for race day.

Slyfield beat Davies in the semis and met Nicholson in the final, and won the event when Nicholson redlit.

Ben Kennedy’s radiator blew and water got under the rear tyre and the car hit the wall. Kennedy was ok.