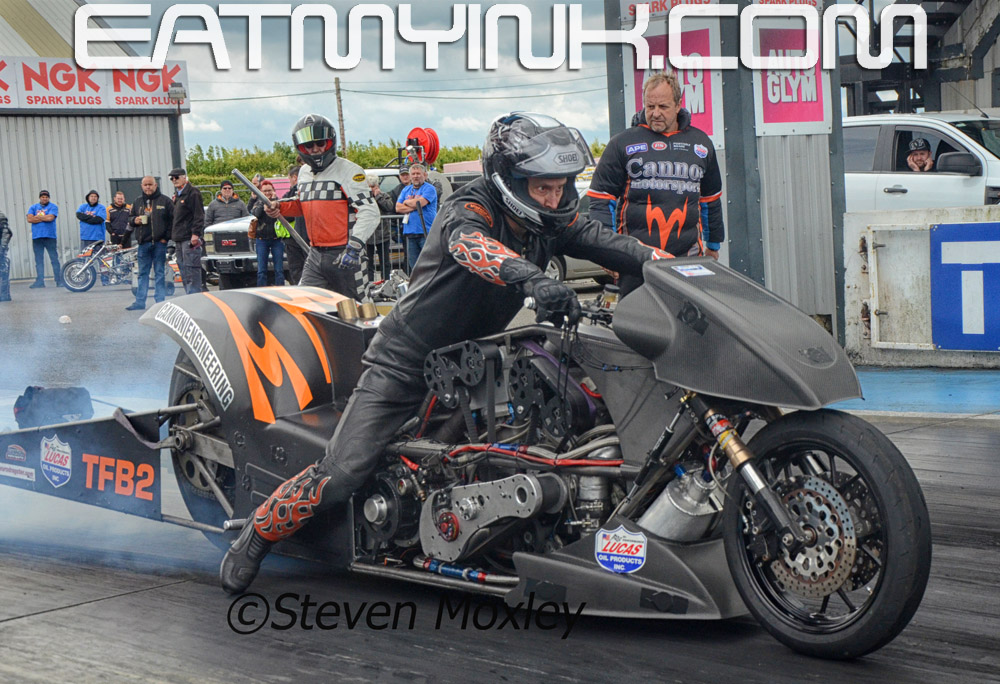 The racers had challenging conditions over the weekend and only two qualifying sessions were completed, one on each day of the two day event. Sunday afternoon the event was called with rain falling.

Neil Midgley (featured photo above) has a new prime drive unit and ran 6.771-155 for number one spot.

Al Smith has new bodywork and a bigger fuel pump. After the first pass the team changed the short motor (you can see why in the Eatmyink Facebook Group) transferring the cylinder head, etc. and qualified 7.165.

Allan Davies has new two new FIE Magnetos, BDK valve and flow meter for the fuel and was looking for a baseline of the new combination. Saturday night the team worked on the fuel system and ran a best of 14.671.

Reigning ACU Top Fuel Bike Champion Steve Woollatt didn’t qualify, missing the first session and then getting shutdown after his burnout due to a fluid leak in the second session.

Stuart Crane ran a jaw dropping career personal best 6.667-205.17 straight out of the trailer. It was Crane’s first 200+ mph run. The bike was on a soft setting, so there is more to come.

Lorcan Parnell had a new front fairing fitted to the bike and ran 7.975.

Dave Peters has modified the cylinder head and rewired the bike and has a new paint scheme. In the first session he had an electrical part fail, which blew the carbs off and had a fire, which the top end crew put out. He ran 8.068-159.07.

Jiri Lukes has a new engine built by Jake Mechaell and a new MTC multi-stage clutch and was looking for a baseline. He had a camshaft senor issue and then ran 8.582-156. Mark Smith has new carbon fibre bodywork, but suffered a couple of issues, running a best of 9.205.

Mark Dainty has done a lot of work over the winter to his bike. New Rock clutch, Garrett GT40 Turbo, and rear suspension mods, which resulted in his first number qualifier spot with a 7.443-185.09.

Newcomer Alan Morrison Jr. has bought Richard Stubbins’ championship-winning bike and, with Stubbins tuning, he qualify number two with a 7.744-183.63.

Reigning ACU Super Street Bike Champion Steve Venables has a new swing arm, new bodywork (bike 20kgs lighter) and ran a Dunlop rear tyre to a 7.809-189.80. Mark Hope is another rider with new bodywork and DME swing arm, he went 8.048-131.  Stephen Mead has his number one motor back in the frame with a new Owens turbo, but struggled to a 9.307. Dave Smith also struggled 9.382. Alex Hope had traction problems off the start line 10.263.

Reigning Champion Jay Roe started his defence of the title with a 8.535 to lead the field. Nearest challenger was Joe Elliott 8.603 just ahead of Steve Howe 8.632.

Jonny Young was on the ex-Ian Turburville bike and ran 11.688. Torsten Appel had fuel issue didn’t get a time.

Former Pro Modfied champion Roger Moore has now gone onto two wheel machine and is riding the ex-Bob Brookes bike, with Brookes helping the team. Moore ran his first full pass on Saturday with a jaw-dropping 7.681-136.02.

There was a match race between Tim Garlick and Paul Harris. Over the winter Harris and his team did work on a clutch issue, which resulted in better figures at the 60 foot and 330 ft in the first race, which Garlick won 6.291-229.34. Garlick won the second 6.282. Harris clicked off at half track.