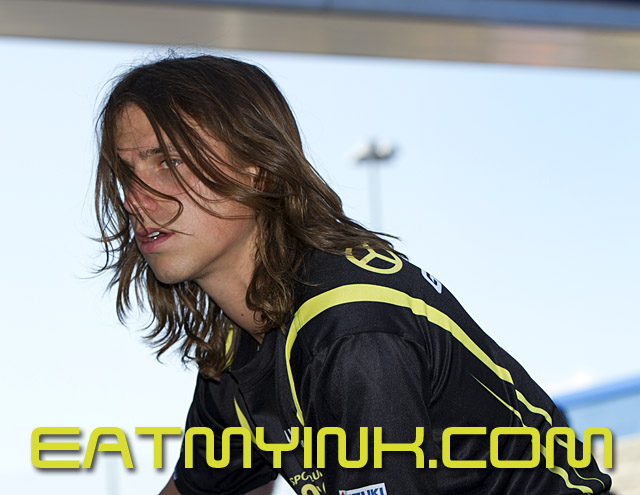 Must of us, like me, have known Joey Gladstone well since he was a 16 year-old kid. We’ve seen him grow, seen him become a winner, a champion, and move on to a professional riding and management position with NHRA Pro Stock Motorcycle team Cory Reed Racing. And now we hear about him having a serious crash.

Details are sketchy, but Joey went down on the former “Gravedigger” nitrous grudge Suzuki Hayabusa on the top end at Darlington, where two bikes crashed yesterday. According to HTP Motorsports (and Reed Motorsports) tuner/builder Cecil Towner, Joey was testing the bike to enter in Orient Express Pro Street at XDA races this year.

Also according to Cecil, Joey clocked a 6.68 at 208 mph while sliding over the finishline. Cecil reports that Joey has “broken ribs, broken scapula, bruised lungs, and has to stay in the hospital for two days.”

I’ve already reported this morning about Chris Bostick going down on a Reed Racing EBR yesterday, and only found out this afternoon that Dave Barron also wrecked in the same lane—but a little further down the shutdown, not going as fast and not as badly as Bostick. Barron’s EBR was only recently bought from Reed and gets tuning help from the team, so it’s been an incredibly tough two days for the Virginia-based team.

“Happened about 30 minutes after I went down,” Bostick said about the Barron crash. “I watched his pass standing at the starting line in my socks. He didn’t get in town until about 2 o’clock and he didn’t have a first pass early, like the rest of us did. He had a great run, his career best as well. We were both in the right lane and his accident was just a little further down track than mine. His bike was not torn up as bad and he was doing good after a scary slide. I rode in the golf cart with him, bringing him back to the pits from the crash site.”

Indeed, I’ve messaged with Barron and he is well. Bostick reports that his own left hand is very swollen and he will sit Vegas out even if a bike becomes available.

Let’s hope this is the end of what’s been a bad two days at Darlington and that this coming weekend is safe for all. And let’s hope for a speedy recovery for new dad Joey.

Story and photos by Tim Hailey