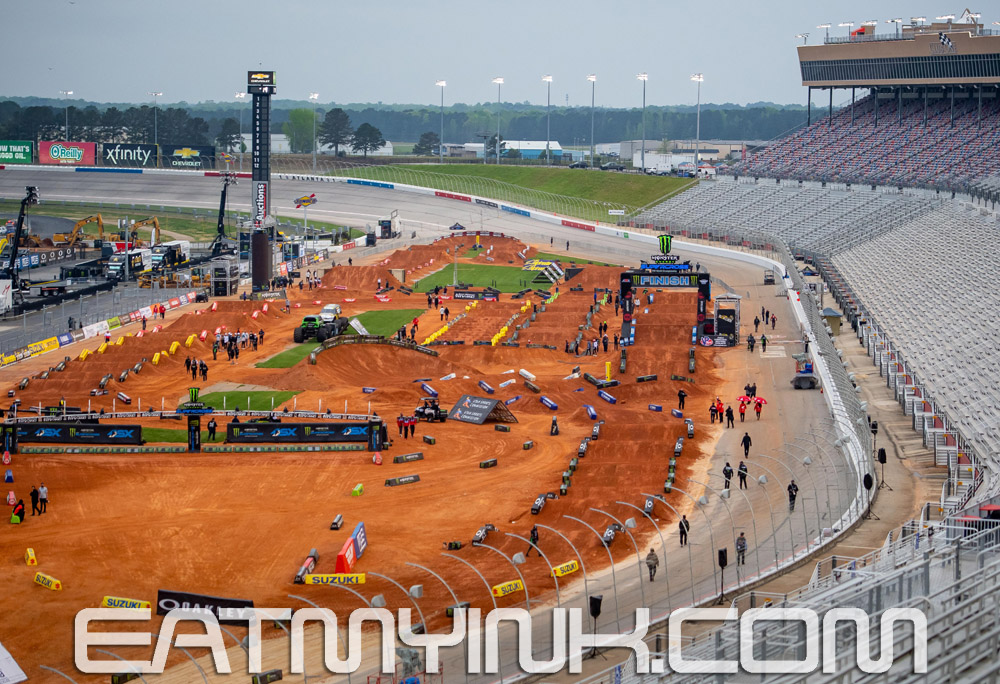 “I would like to stay the engine has something to do with it, but Eli would probably be competitive on a stock engine at Daytona!” Kawasaki’s Aaron Johnson said after his rider Eli Tomac won at the trioval layout in Florida. “Eli really likes Daytona. More MX style track.”

So it’s no surprise that when Monster Energy AMA Supercross set up a similar layout in the trioval at Atlanta Motor Speedway, it was Tomac and the CP-Carrillo equipped Kawasaki that came away with the win.

Supercross kicked off a triple header in Atlanta with a daytime event where Tomac used speed and patience to pull off the dramatic victory, his third of the season, in front of the limited-capacity, pod-seated fans.

In a heartbreaking loss, Team Honda HRC’s Chase Sexton led for over four laps before a run-in with a lapped rider cost him the lead with the white flag in sight. Series points leader Red Bull KTM’s Cooper Webb ran in second early in the race but had to settle for a third place finish when the checkered flag came out.

At the first-ever Monster Energy Supercross at the venue, and with a long 4,591 ft open-air track reminiscent of the Daytona layout, heavy rains mid-day meant the riders only had one ten-minute session on the track during qualifying before opening ceremonies. But by the Main Event, the skies were clear and the red Georgia clay was in good, but rutted, condition.

Monster Energy Yamaha Factory Racing’s Aaron Plessinger grabbed the holeshot and instantly gapped the field. Plessinger looked destined to grab his first 450SX Class win as he stretched out more than a five second lead over second place Cooper Webb. Chase Sexton hovered just out of range of a pass on Webb while Tomac was just as close behind Sexton.

Ten minutes into the abbreviated 18-minute plus one lap event Sexton flew past Webb in the whoops and set after Plessinger. Less than one minute later, Plessinger fell awkwardly due to a tiny front end washout. Sexton inherited the lead as Tomac applied the pressure to Webb and got by with just over six minutes left on the race clock. From there the Kawasaki rider reeled Sexton in, getting the gap to under one second when a lapped rider threw off Sexton’s jump rhythm and Tomac flew into the lead. Sexton didn’t battle back, and Tomac brought it home for a win on the track that many saw as very similar to the Daytona track and therefore favoring Tomac’s style.

“I came in here with a good mindset,” said Tomac. “The longer track layout felt like it was going to suit me, and it did today. The track was a beast today and it changed up a lot throughout the main. I was able to switch up my lines in the whoops and made up some great time there. I made a few good passes in combination with a couple of gifts, but I’ll take it. I’m happy we’re coming away from this one with a win, especially with the challenges the rainy weather brought us. Thank you to the entire Monster Energy/Kawasaki team for getting my KX450 set up perfectly today. I can’t wait to get back out there on Tuesday and battle for another win.”

Coming so close to his first win, Sexton still earned his first 450SX Class podium finish. Surely more disappointed was his teammate, Team Honda HRC’s Ken Roczen, who got off to a bad start outside the top fifteen and was never able to make it further forward than ninth. Eventually finishing in that spot, the Honda rider lost seven championship points on Webb but still remains second in the standings.

Fourth first-time winner Thrasher nearly grabbed the holeshot even with a poor gate pick due to a trip through the Last Chance Qualifier. Once into the early lead the Yamaha rider looked picture perfect on the slick red dirt. Thrasher held on without any major mistakes through the 13-minute plus one lap event—a two minute abbreviation due to a schedule affected by the mid-day rain and mud.

Thrasher’s teammate, Monster Energy Star Racing Yamaha’s Justin Cooper, earned a second place finish to stretch his points lead to four over third-place finisher Monster Energy Pro Circuit Kawasaki’s Cameron McAdoo. Cooper was sore from a heat race crash and benefited from a late-race crash from ClubMX / IAMACOMBACK / Yamaha’s Garrett Marchbanks. The podium finish gave Cooper two more points in the championship battle over McAdoo, who had a wild Main Event. After grabbing the holeshot, McAdoo got shuffled back. The Kawasaki rider moved aggressively forward but a crash in the whoops three and a half minutes into the race ended his early charge to get back into the lead. McAdoo recovered to round out the podium.

“It was very important to charge as far up as I could with the points battle so close,” said McAdoo. “I wasn’t patient enough today and with the tough conditions it cost me. In the main event I got a great start, but got shuffled back and didn’t let the race come to me. We are still so close in points with three races left and you bet we will be coming out swinging.”

Following the 450SX Class Last Chance Qualifier, Supercross fans were treated to some additional high-flying action as Monster Jam driver, Todd LeDuc, showcased a signature Monster Jam truck backflip in the middle of the expansive Supercross track. LeDuc, the driver of the Monster Energy truck will be back at Atlanta Motor Speedway on Saturday, April 24 and Sunday, April 25 along with the rest of the Monster Jam fleet for four action packed events.

The second race of Atlanta’s triple header drops the gate on the final SuperTuesday event of the season on April 13th, then wraps up the Atlanta residency on Saturday, April 17th.

Listen to the post-race press conference: