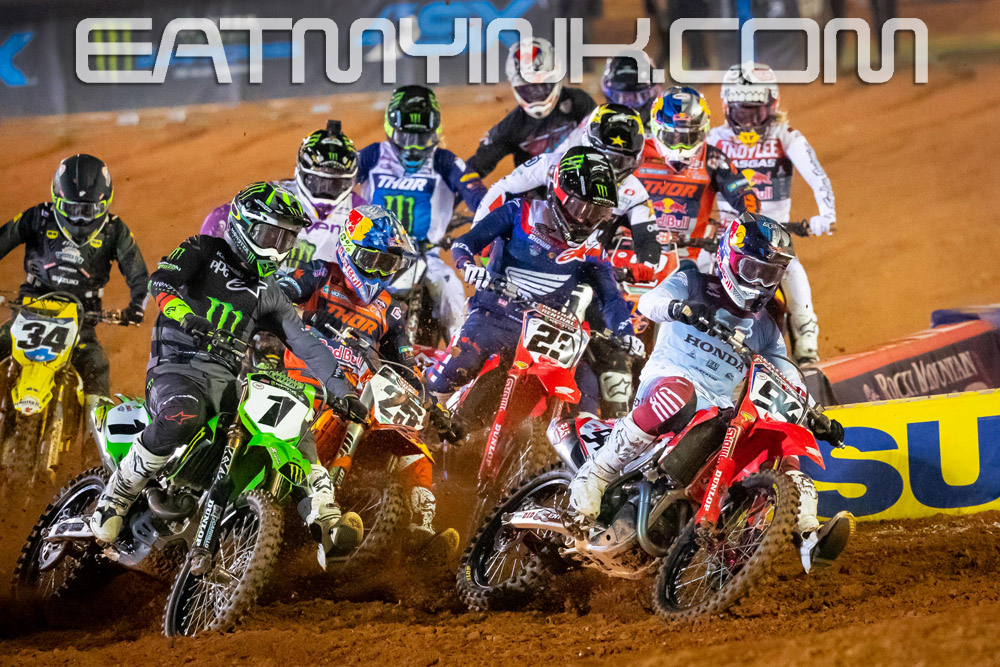 The fourth and final SuperTuesday race of the 2021 Monster Energy AMA Supercross was a wild one, and Team Honda HRC’s Ken Roczen got the 450SX Class win and a significant points gain in the title chase under the lights at the Atlanta Motor Speedway. Earning second place and his second ever 450SX Class podium was Roczen’s Team Honda HRC teammate Chase Sexton, with Rockstar Energy Husqvarna Factory Racing’s Jason Anderson earning a hard-fought third place in front of the limited-capacity, pod-seated fans across the speedway grandstands.

When the racers emerged from the first corner in the 450SX Class Main Event, points leader Red Bull KTM’s Cooper Webb darted into the lead at the holeshot stripe. But Roczen, down 22 points and second in the title chase, got around Webb immediately and was never challenged for the lead as the Honda rider steadily stretched out a gap on the field. Webb was slightly off the pace and steadily fell back in the early laps, allowing his points lead to shrink with each pass in the 20-minute plus one lap race.

Jason Anderson, who started outside the top five after a trip through the Last Chance Qualifier left him with a less than ideal gate pick, was aggressive and wasted little time moving through the pack. With just over three minutes off the race clock Anderson broke into the top five, cut under Webb and into fourth less than two minutes later, and at the race’s midpoint got around Troy Lee Designs / Red Bull / GASGAS Factory Racing’s Justin Barcia to reach his finishing position of third.

Barcia, who’d gotten around Webb in the early laps, found himself under attack by the KTM rider in the final minutes of the race. Barcia was aggressive holding his position and after a few close calls he and Webb made contact; Webb went down. Fortunately it was a gentle crash and Webb remounted with the loss of only one position, to Monster Energy Kawasaki’s Eli Tomac. It was a dramatic race and a big points swing in Roczen’s favor with three races remaining on the schedule.

The Western Regional 250SX Class Main Event was one that will be re-watched, re-told and likely fall into the legend of the sport. Less than three laps into the race, Monster Energy Pro Circuit Kawasaki’s Cameron McAdoo, who was battling in fifth, crashed over the handlebars and was slammed brutally by his own bike into the steep face of a bridge jump. Worse still, the bike caught McAdoo’s foot and whipped him violently in a full, body-extended front flip to deposit him with another hard slam onto the top of the flat jump obstacle. McAdoo lay still for a frightening moment but soon was attended to by the trackside Alpinestars medical crew.

With an injured rider down on the top of the jump the race was red flagged. With fewer than three laps completed, though the Atlanta track’s lap times were nearly twice as long as on a standard track, the rule book called for a full re-start.

As the racers loaded back into the gate, miraculously Cameron McAdoo was among them, pleading to officials to allow him to re-start. He’d been evaluated and cleared to ride, and with a second evaluation completed on the spot, the rider was allowed to remount his bike. McAdoo was obviously sore but with no signs of concussion or broken bones. Four points down in the title chase with three rounds remaining in that series, McAdoo was back in the hunt.

Amazingly McAdoo was right up front again. The evaluations seemed to have been spot on. The Kawasaki rider had the speed and clearly the desire and started to push hard from fifth place. Two and a half minutes into the15-minute plus one lap Main Event he made his first pass on ClubMX / IAMACOMBACK / Yamaha’s Garrett Marchbanks, but the Yamaha rider battled back around. Less than a lap later McAdoo made his second pass stick with an inside line in the sand and set his sights on second place rider, Thrasher.

Just five minutes into the race McAdoo got past Thrasher and into second, with only a 3.6 second deficit to Justin Cooper out front. But as much heart as McAdoo was showing, Cooper was matching it with a composed ride on the brutal track. Cooper slowly stretched his lead to over nine seconds as Team Honda HRC’s Hunter Lawrence clawed his way forward past Marchbanks and eventually past McAdoo with two laps remaining.

“When I first landed, my leg hurt pretty good,” said McAdoo. “I had a contusion on my thigh and I couldn’t really move it, which is why it was hard to get down off the tunnel. After walking on it, I finally got it moving.

I can’t believe the guys got my bike in good enough shape to ride. I am so thankful and happy to have been able to ride to a podium finish. I’ll be taking a few days to recoup but looking forward to getting back out here on Saturday.”

McAdoo’s teammate Seth Hammaker had a tougher than usual night. After going down in his heat race, Hammaker was forced to line up for the LCQ, where he took second. With the additional track time, hot conditions, and then a full restart, Hammaker endured a lot of track time. His first start wasn’t ideal in 15th, but he made the restart count where he settled into seventh most of the race, eventually crossing the line in ninth.

“It wasn’t a great day overall, though I did experience my first LCQ,” said Hammaker. “It probably was the worst day to have to ride more laps with the heat and long track times, but we made it work. My goal this year is to learn something each race and I have a lot I can take away to be better next time. I’ll enjoy a few days off before getting back out on track this weekend.”

Justin Cooper’s speed may be eclipsed in racing lore by McAdoo’s heart, but it was a significant night in the championship for both riders.

Listen to the post-race press conference: