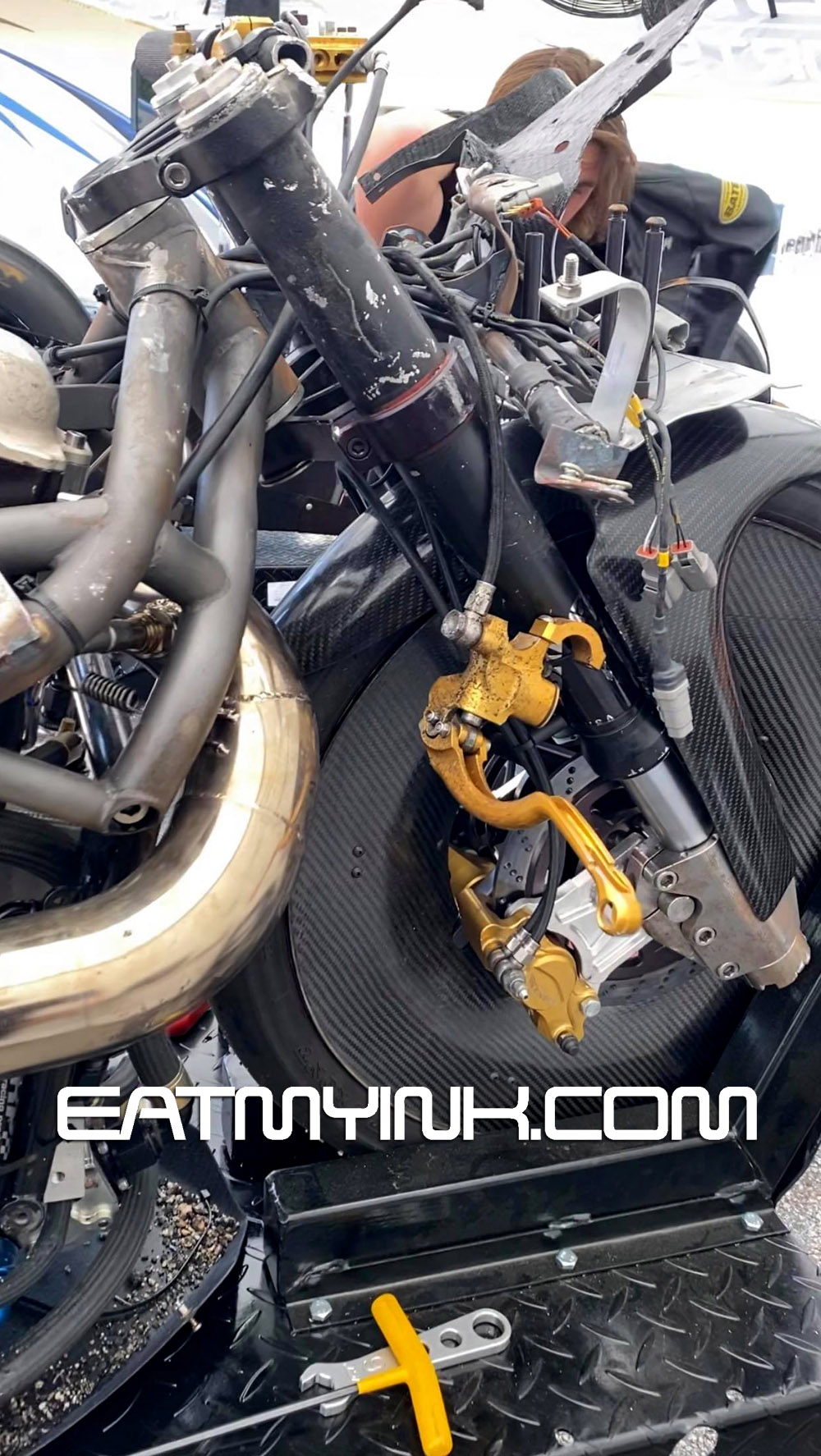 Everything was going just as he’d hoped on NHRA Pro Stock Motorcycle racer Chris Bostick’s first full pass on a Cory Reed Racing EBR, until it wasn’t. “It went straight as an arrow and had unbelievable power,” said Bostick, who was testing at Darlington. “I went a personal best of 6.83 seconds on my first full track pass.” 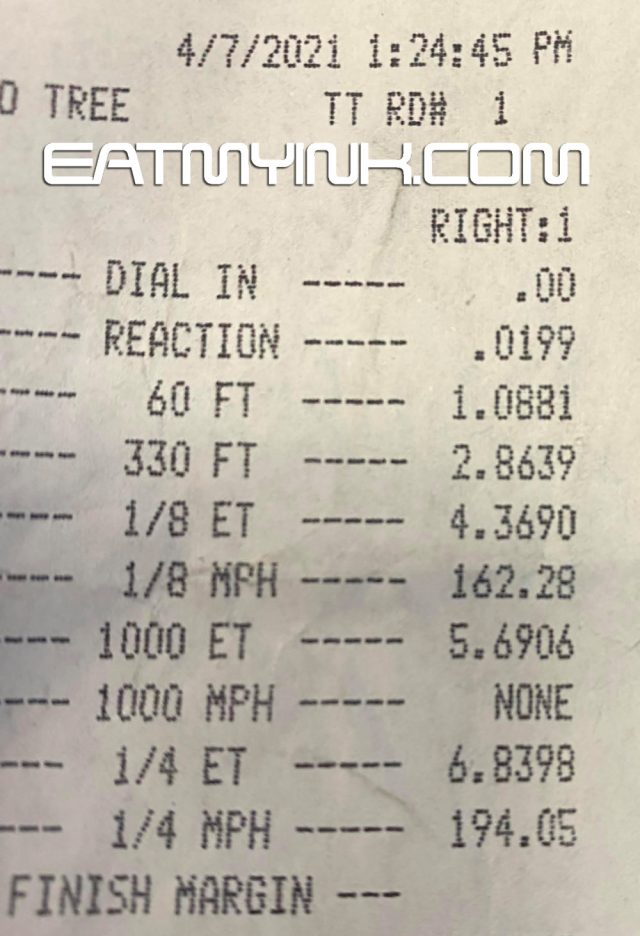 But then, Bostick admits, he grabbed too much front brake. “Combined with the rough, cracked, downhill shutdown area, resulted in a violent crash at over 190 MPH,” continued Chris. “Definitely not the way you want to end your day of testing/preparing for the upcoming Las Vegas race.”

Bostick has shopped around a bit since buying an infamous, one-off, 20+ year old Kosman “Gucci” chassis—never built to hold anything nearly as powerful as the Monster 4 valve Suzuki. At the Man Cup finals last year, he rode three different bikes in one day—including Angie Smith’s EBR.

Bostick’s previous personal best was on the Gucci—a 6.84 at this year’s Gatornationals. He’s in wait-mode as Mike Mullaney finishes up a new Hayabusa-bodied bike, now scheduled to be race-ready for Atlanta. Parts delays kept the new bike from being finished for Vegas, and Bostick’s tuner/engine builder George Babor had stripped the Gucci down for a complete re-do. Hence the Reed EBR.

“Can’t say enough great things about the motorcycle Cory Reed and Joey Gladstone supplied me with,’ said Bostick. “Unfortunately, the shutdown area of the dragstrip wasn’t my friend.”

“Chris did a wonderful job riding the motorcycle,” said Gladstone. “My goal was for him to run his career best pass and he did.

“When you lock up the front tire on these things, the bike is dancing on the edge of going down. I imagine that if we were at a different track we wouldn’t be talking about this.

“We’ll put on a new body, new front end, we have a spare set of carbon fiber wheelie bars ready to go,.and I’ll pull the motor apart to check it out. We have fast stuff. We have customers who are interested and we have to build it back just as fast.”

Joey didn’t want to talk about who ends up with the repair bill when this kind of thing happens, but added “Hopefully, Chris wants to rent from us again. He’s a stand-up dude.” 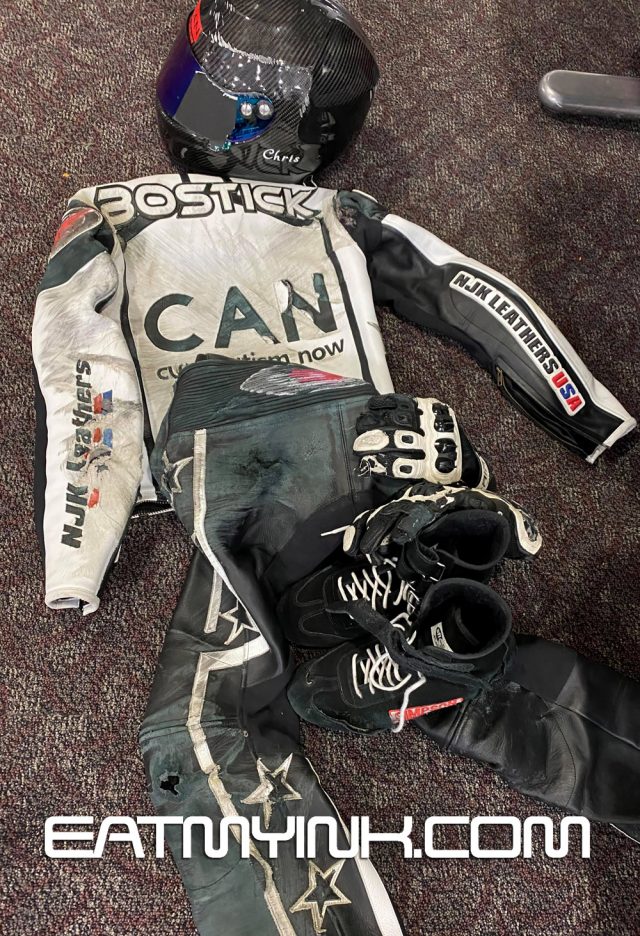 Bostick is personally in shape to ride at Vegas, but currently without a bike to do so. “I definitely got banged up a bit, but have to give a shout-out to my sponsor Kelcey Gordon and his amazing NJK Leathers. They did their job of staying between my body and the pavement. Biggest injury was my pride, just part of the sport. Thankfully Jesus was watching over me as He always is.

“When you fall down in life, pick yourself up and learn from it. To be your best you have to keep doing your best.”

Hopefully, Bostick and the Babor-built Monster 4V will be able to show their best when the Mullaney chassis hits the track in Atlanta.