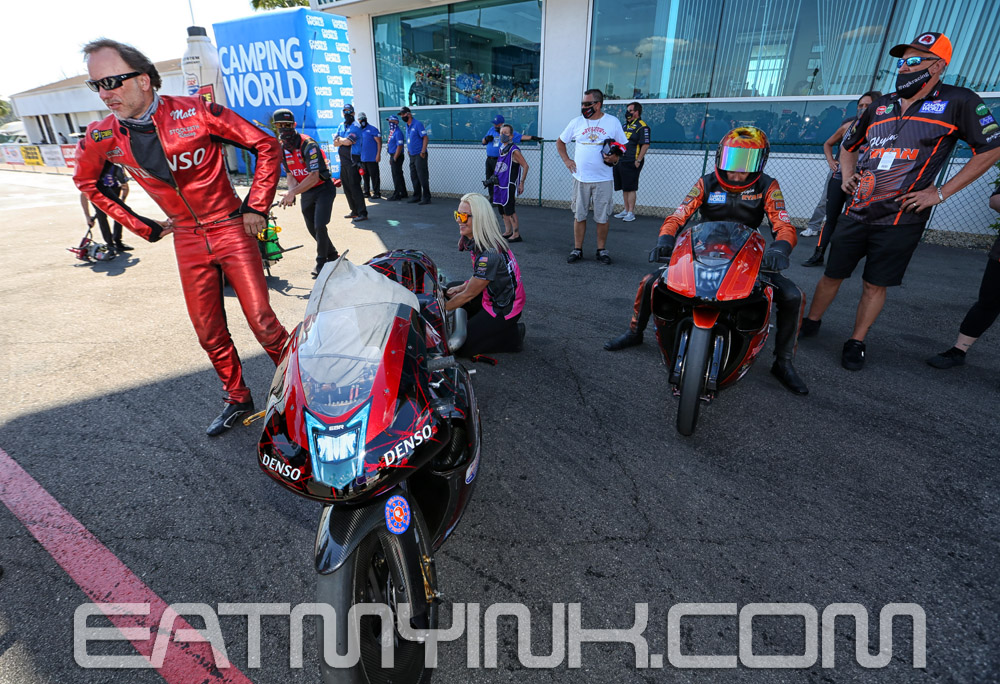 I left the track right after PSM’s Friday evening qualifying session—electing to beat the crowd while the cars were still running and get a jump on finding the house I was staying in.

House found, nearby restaurant located, seat at the bar taken. While drinking a local brown ale and waiting on my blackened grouper, I read on Facebook that Matt ran long into the sand-trap, but that the bike was mostly OK. It seems that the left front rotor broke.

I first learned there was more to the story when I got to the staging lanes for round two of qualifying. The first person I walked up to was Ryan Oehler. Before I could even say “Hi,” another racer rolls up to Ryan and said “Man, you’re a better man than me. I could never let a man get in my face and talk to me like that.”

I could tell that Ryan didn’t really want to talk about it, but clearly the cat was outta the bag. “What’s that about?” I asked.

It wasn’t the first time that the talk of the PSM pits in the morning was about something Matt had done the night before. Last year at one of the Indy races, it was Chris Clontz with a story to tell. A couple of years ago at zMAX, the cops were beckoned to the MSR trailer by Joe Riccardi. Add in Hector Arana, Michael Phillips, Shawn Gann, etc…

It seems that Matt went to Ryan’s trailer in search of rotors, calipers, etc. to fix his EBR, and Oehler travels with a spare bike. “No problem,” Ryan reports as his response. “Let me button up what I’m in the middle of. It’ll be about 30 minutes.”

“I then knew Matt Smith was the Shooter McGavin of PSM,” said Oehler.

Apparently, everyone from MSR apologized to Ryan for the outburst except Matt. “I saw Matt walking over to Ryan’s trailer and I thought he was going to apologize to him, but instead he started motherfucking him again,” said one racer.

Was there any history between the two leading up to this short fuse? “Nothing,” said Oehler. “He always was there for me when I needed something just like I was gonna be for him, but he cracked for some reason.”

As luck would have it, Matt and Ryan met in the final. “After the semis, at the end of the track, when it was clear we would be racing each other, I went up to him and said ‘I know you’re not going to say anything to me so I’m telling you it’s over, I’m putting it behind us,’” Ryan reported saying to Matt.

Whether there would be a handshake before the final or not turned out to be a moot point. Matt rolled up at the hectic last second and, with the Fox broadcast apparently live, the NHRA crew was shouting before he even had his jacket on “Get in the water NOW!” The featured photo at the top of the page is from that moment.

Matt ran a 6.785 at 200.65 to beat Ryan Oehler’s 6.869 at 196.53. It was Smith’s quickest run of the weekend, and every run in eliminations put a 200 on the scoreboard. He knocked off Jim Underdahl, Hector Arana Jr. and Steve Johnson to reach the final round and win in Gainesville for a second straight year—his 27th career win.

“I just have to go up there and race my lane,” said Smith, a four-time Pro Stock Motorcycle world champion. “This bike was on mean this weekend. We weren’t able to quite get the E.T. we needed, but this bike was running the speed.”

Oehler advanced to his third career final round thanks to round wins against Jerry Savoie, Karen Stoffer and Scotty Pollacheck.

One of the last people I saw before leaving the track Sunday evening was Angie. “If Matt wants to say anything about what happened, let me know,” I said. “I’d be happy to publish it.”

“No, it’s over,” said Angie, possibly referring to Ryan’s statement after the semis.

But it didn’t seem over right then and as the week after the event wore on and people were still talking about it, it clearly wasn’t.

Meanwhile, scroll on for photos, video and stories about the rest of the field.