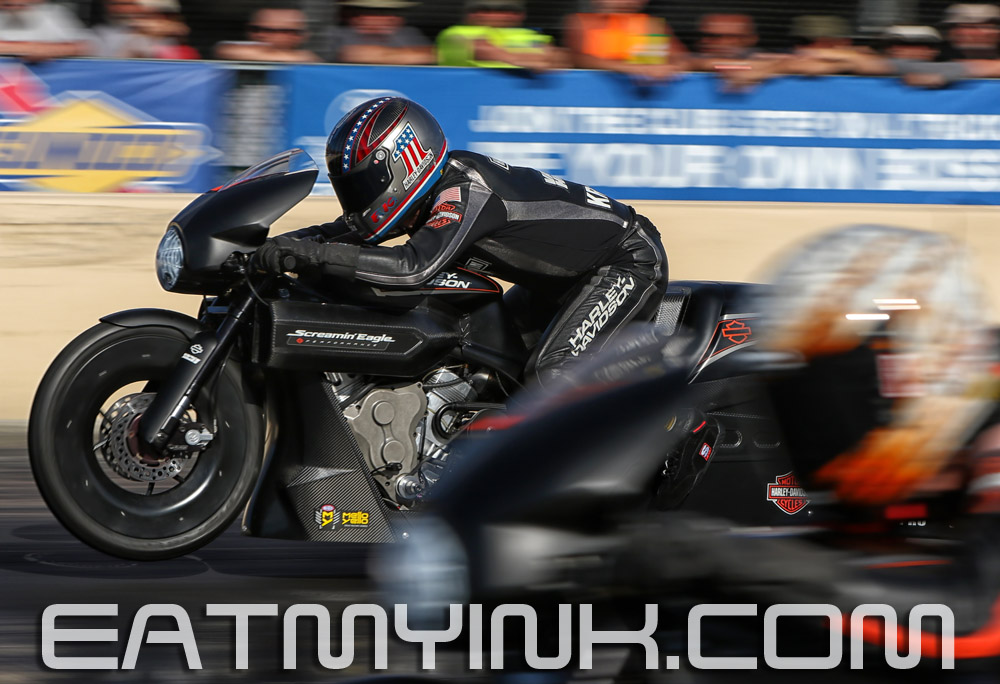 They’re not on the Gainesville entry list yet, but I’m told that EBR bodied Vance & Hines V-Twins may be ready as early as the NHRA season opening Gatornationals in a week and a half. That beats the earlier estimate of April that I heard previously, so we’ll see which one of those is correct. Either way, expect those bikes in the V&H trailer for Eddie Krawiec and Andrew Hines alongside Angelle Sampey’s 4V Suzuki at some point early this season.

I still expect Joey Gladstone’s words in this earlier article to ring true that the Reed Motorsports team will take delivery on a V&H V-Twin EBR to go with their 4V Suzukis at some point this season. It seems a better fit for the taller Reed.

The Reed Suzukis and Angelle’s should be sporting the White Alligator Racing (WAR) produced Hayabusa Gen2 bodies at Gainesville, but the WAR team won’t. The project was held up on Suzuki’s end, and Indianapolis-based Aerodyne got a late-start on the project. “They got behind, and I didn’t think it was right for me to be out their with one of the bodies before our customers,” said WAR boss Jerry Savoie, who said they have orders for four bodies. He’ll still be on the TL1000 at the Gators, as will be Karen Stoffer—back on a WAR Suzuki after sitting 2020 out.

According to WAR’s Tim Kulungian, Stoffer has no plans to switch from the TL body. Anyone who’s seen the slender Stoffer disappear into the TL bodywork knows it fits her like an Isotoner.

Like Stoffer, Jianna Salinas will be back in action this year. Her Scrappers Racing family has bought the Gary Stoffer/Greg Underdahl team, and Jimmy Underdahl is entered as her teammate for the full season this year. They will have V&H 4Vs when they become available to them.

Kelly Clontz will have two V&H 4Vs at her disposal on the Steamfitters Local 602 Suzuki with husband Chris turning the knobs, but will run a 2V at Gainesville.

Speaking of behind in production, Alabama racer Charlie Poskey doesn’t expect to have his motor from V&H ready to go into his Petty blue TL until Atlanta. Hello George Babor, sounds like a customer opportunity! Here’s a cool pic of Poskey’s bike with his matching biplane:

Chris Bostick is anxious to get his Babor-built Monster 4V up and running in his new Mike Mullaney chassis. Read more about that here.

And Steve Johnson will also have a Monster 4V at Gainesville, “If they let us in the gate,” joked Steve.

Ryan Oehler seems full speed ahead, despite announcing that wife Laura is pregnant with their first. John Hall will jump aboard Oehler’s second bike (that he bought from Hall) after Johnny Balls starts the season with Matt Smith Racing—at least that’s the plan.

Scotty Pollacheck will also be rejoining Matt and Angie, as champion Matt will have strong competition within his own trailer for the championship this season.

All in all it should be a year of unknowns—what with 4V Suzukis from two builders, the new Sunoco fuel that doesn’t slow burning above 10,000 rpm, another winter of hard work from the Smiths, H-D badges off the V&H bikes….It will be wild and weird, and we’ll have more news next week or before.

story and photos by Tim Hailey, except for Poskey photo courtesy of Charlie