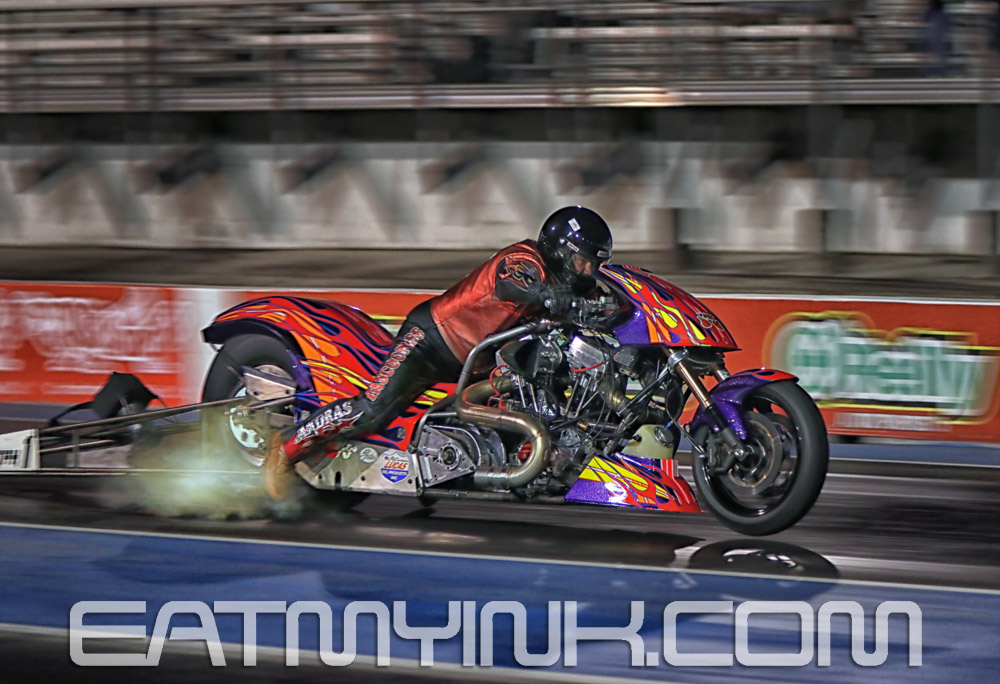 While the Top Fuel Harley final round at the NHRA season opening Gatornationals at Gainesville Raceway ended up like a 2020 season deja vu—Randal “Fast Coon Ass” Andras (photo above) winning against ’18-’19 champ Tii Tharpe—the 2021 vibe was totally different.

Mickey Thompson declining to renew their TFH sponsorship has left the class on the ropes. NHRA has taken a hardline, no compromise approach that includes no purse while still requiring entry fees. There have been some heated meetings, with three different rider/owners taking the seat opposite of NHRA’s Vice President of Competition, Ned Walliser.

First up was Jay Turner, who as owner has fielded as many as six bikes at a single event. That’s 75% of the 8 bike field on raceday.

Turner actually found seven individual race sponsors—at $10,000 each—and brought a package to NHRA. But the bean counters that run NHRA decided there weren’t enough beans for them in Jay’s proposal and said “No,” demanding a 30% cut for the organization. Tempers flared (I’m told that Turner and Walliser have a “history”) and Jay washed his hands of the whole deal.

Turner sat the Gators out, refusing to pay to race in the way that NHRA demanded. He was still at Gainesville Raceway, fielding bikes for customers Andras and Tharpe, and telling his tales of dealing with NHRA.

In fact, a video on Facebook of Jay giving his opinion of the NHRA is said to have put the California-based organization in the mood to cancel the popular highlight reel class for the rest of the season.

Easy-going Harley-Davidson dealer Vreeland was next to sit down with Walliser, and apparently the NHRA demand was down to 25%. But when Walliser told Vreeland that the season was paused because of Turner’s video, Rich also walked away from the table. Now it seems Vreeland and Walliser might have a “history” too.

“I told him ‘Thank you, I’m going racing with my people,'” said Vreeland.

Enter class record-holder Bob “Opie” Malloy, who insists that there is no pause in the class schedule at NHRA, with a projected return to competition at zMAX Dragway on May 14-16. “That’s our goal,” said Malloy, who in his day job as Sales Manager for Boninfante is used to the give and take of negotiations, and what sponsors expect for their money.

“There is a schedule and we’re looking for funding. NHRA is still Goliath, and we’ll get through it, we’ll get past it.”

But to get past it and keep nitro-burning motorcycles on track at NHRA Camping World events will require more than just the ego-satisfying experience of racing in front of tens of thousands of fans and a few seconds on TV, it will require a purse. Nitro Harley racers can’t be expected to pay their way into the show with zero chance of any return. “I know for a fact that the pro teams don’t pay entry fees,” said Turner.

And indeed, a full-schedule team like Flyin’ Ryan Oehler’s PSM operation pays only $120 per race to cover their insurance. In return they get four starting line passes (rider included), two additional passes with no starting line access, a media pass, and a purse to race for.

By contrast, Vreeland paid $340 entry for himself and his bike at Gainesville, and $95 apiece for crew and sponsors, with no purse to race for. “I bring a lot of people, so that was over $1340 for me,” said Rich. Add to that the nitro—which he is required to buy at the track at NHRA events—at $40.60 per gallon, totaling over $800 for the Gatornationals. And that’s not even considering his $627.16 diesel bill for the trip.

So you can see why Rich told Walliser “I’m looking forward to racing AHDRA and AMRA.”

Before that, though, Vreeland qualified number one with a 6.63—one of only three bikes that got down the track in competitive fashion over three rounds of admittedly not sponsor-worthy qualifying.

But raceday was different, and Vreeland‘s personal best 6.50 wasn’t enough to get past Andras, as Jay Turner Racing and most of the class suddenly remembered how to put power to pavement.

Andras went on to advance past a redlighting Malloy to face his teammate Tharpe in the final. Tii took the tree but Randal went A to B with a 6.40 for the win.

As for potential sponsors, you can read what it takes and what you get in this article. In addition to aligning themselves with the toughest men on the scariest machines at the track, potential sponsors also get to put their brand’s name right next to Harley without paying a dime to the motor company…unless that sponsor is, say, Indian, in which case the whole class gets a name change.