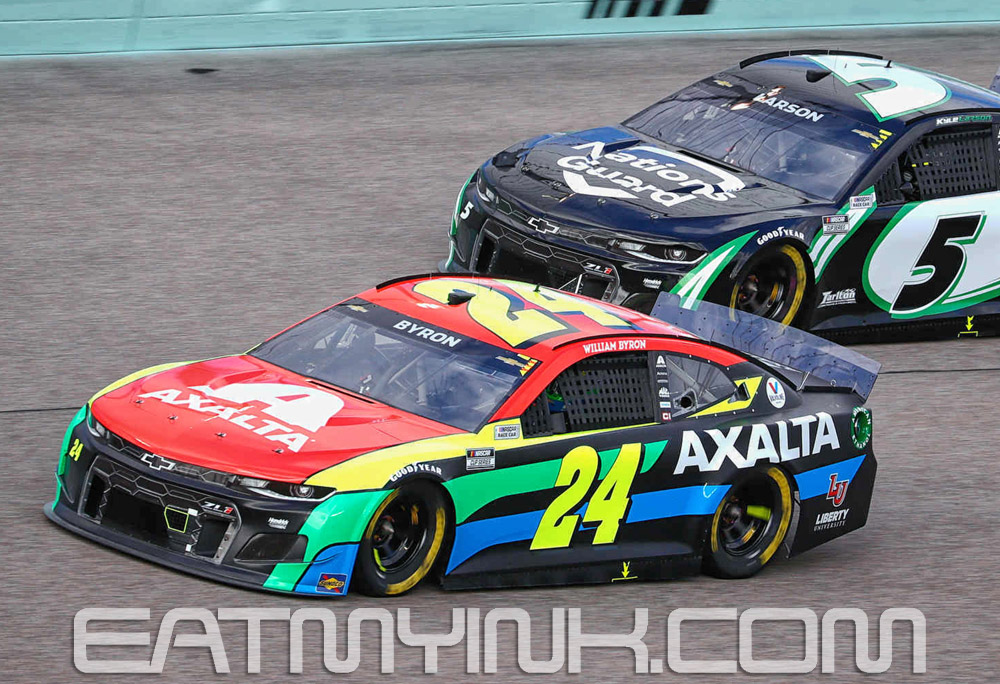 The win is Byron’s second-career victory in 112 starts in NASCAR’s Premier Series. Taking the Stage Two win and leading 102 of 267 laps at the Florida 1.5-mile venue, the feat secures Byron’s spot in the NCS Playoffs for his chance to compete for the championship title.

Byron said before the race that it would be won on the bottom under the lights, and so it was. “You had to go with the wall at certain times,’ said William. “Three and four were really fast up there. I definitely didn’t do it as good as the Xfinity cars do it, but I used it when I had to, and this car was just awesome.

Byron was asked about crew chief Rudy Fugle, who collected his first win in only his third race with that title. “Yeah, that guy has been huge for my career. He’s the reason I’m here and I’m glad we could get him. He’s just awesome.

“This whole team did a phenomenal job. Everybody. The pit crew, over the wall, we’re extremely blessed. Thanks, God, for all the things that it takes to get to this level. Great boss in Mr. Hendrick and Jeff Gordon, and Axalta. This car looks really cool. I’m can’t even believe it, honestly. It was just a really smooth day. And we worked hard in the winter on this track. I can’t believe it.”

“It’s really a lot of hard work. I think we went to the simulator four or five times this off-season and it just pays off, man. It’s awesome.”

The win is the 264th triumph for Car Owner, Rick Hendrick, and Hendrick Motorsports, making the organization only four NCS wins away from tying Petty Enterprises as the winningest team in NASCAR history.

Byron led a strong Team Chevy showing, with the brand capturing five of the top-10 positions in the final running order. The win was celebrated by Byron’s Hendrick Motorsports teammates, Kyle Larson, No. 5 NationsGuard Camaro ZL1 1LE, and Alex Bowman, No. 48 Ally Camaro ZL1 1LE, who crossed the line in the fourth and ninth positions, respectively.

“It got pretty intense there at the end,” said Larson. “I was just trying to take care of my tires and was just struggling on the long runs. We were loose for a majority of the race and in that last run, we actually got kind of tight. But I felt like being tight was better for my long runs than loose, just because I could be a little more confident. I would have liked to finish second, but those guys were better than me in the end and I just couldn’t hold them off. I hate that I gave up those spots. But it was a good day for the NationsGuard Chevy team. Congrats to William Byron. It’s really cool for William to get a win this early in the year. Hats off to their team and hopefully we can get it done soon.”

Richard Childress Racing’s Tyler Reddick wheeled his No. 8 Cheddar’s Scratch Kitchen Camaro ZL1 1LE to a runner-up finish, giving Team Chevy three of the top-five finishers of the race. “Well, finishing second is a good night considering how the first two weekends of the season have gone, but I hate that I didn’t get this Cheddar’s Scratch Kitchen Chevy into Victory Lane because if I would have then I would have gotten a lot of people in America free chicken tenders on Monday night,” said Reddick.

“Once I really saw how fast we were in clean air at the end of the race, and I saw how fast we were catching everybody, it became beyond frustrating because I know just two or three different decisions on a restart would have put me miles ahead. I knew that we were going to have to have a well-executed restart. We didn’t do that, and it takes time to get around all of those cars who pass you on a restart because they are all really good drivers. That’s the difference.

“I thought we would be better in the day and everyone would catch up at night, but it was the opposite of that. We tried to work on our Cheddar’s Scratch Kitchen Chevy throughout the night.

“We learned a lot. You have to win these races by being very consistent and making the right calls as a driver and as a team. I’m proud of how fast we were at the end of the race.”

Kurt Busch, No. 1 Monster Energy Camaro ZL1 1LE, came home in the eighth position. “I’m not going to second guess having to pit,” said Busch. “We had a vibration and a loose wheel and we had to pit. We unlapped ourselves and drove all the way back to eighth. It just took our chance of winning away or being up front for a final restart.

“But what a really good long-run speed car, the Monster Energy Chevy was really fast with the sun out and on long runs, so that’s the good. We just need to find our short run speed and when the track picks up pace at night.”

The NASCAR Cup Series season continues next weekend as the Series heads west to Las Vegas Motor Speedway for the Pennzoil 400 presented by Jiffy Lube on Sunday, March 7, at 3:30 p.m. ET. Live coverage will air on FOX, PRN and SiriusXM NASCAR Radio.

story and photo courtesy of Chevrolet