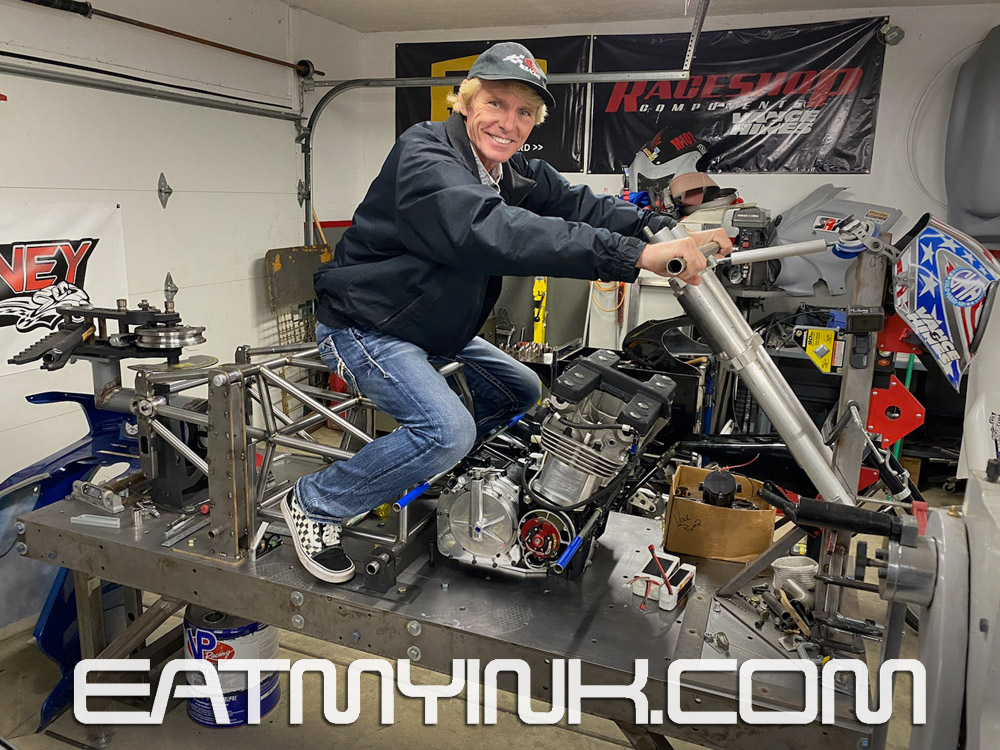 A) He was going to take the seat on the purple Matt Smith Racing (MSR) EBR he rode a lap on at the SGMP Man Cup race. Word was that Scotty Pollacheck hadn’t yet decided to renew the lease on the bike he won the 2020 U.S. Nationals on.

B) He was buying a new chassis for his two George Babor-built, Monster 4-valve-topped Suzukis. And since Brownsburg fabricating wunderkind Mike Mullaney was building a new Suzuki PSM chassis, that seemed like it would be the one that Bostick would buy.

Time moved on and the news filtering out of MSR was that Bostick wasn’t in the picture there. Chris never listed his motors for sale, so plan B seemed like the likely one.

A couple of weeks ago I learned that Pollacheck was going to continue his Purple Reign. Thursday, the other shoe dropped when Bostick confirmed his Mullaney plans to me.

“Mike is building me a brand new bike and it will have the new carbon fiber Hayabusa body,” Chris told me.

This ‘Busa body is the one originally developed by Don Schumacher Racing and recently updated by White Alligator Racing and NHRA approved.

“It’s something I’ve been pretty stoked about and working on as much as I can,” said Mullaney. “The project is coming along well. Just waiting for some components so we can get it on the floor and finalized.

Mullaney just recently got the Monstar engine in the frame rails. “Man, it’s looking great too,” said Mike. “I just wish we were a little further along for the amount of time that I’ve spent on it. But hey, can’t control parts deliveries, companies…especially through COVID times.”

“I hope and pray that it will be ready to test before Gainesville (the NHRA season opener on March 12-14), but that isn’t likely,” continued Chris. So he is prepared to start the season on the black and white, Cure Autism Now, Kosman GSXR.

“Good news is, we found part of our horsepower problem,” reported Bostick. “We have changed cams and valve springs. We ran the last for races unknowingly with four of the eight intake valve springs broken. That explains why the first race we ran with the four valve, we went 197 miles an hour and then we could never make it do that again. It must have broken those valve springs right after that pass at the first race it ran and never had the power to do it again.”

“I think we could seriously have a top contender bike here,” added Mullaney. “There is no reason why we couldn’t get a few yellow hats together.”

John Hall’s crazy dreams will move from the (WAR) Suzuki he rode occasionally that last two seasons to “at least three races” on the MSR EBR that Angie Smith has been riding, as Angie moves to a brand new build.

Hall will also be making starts on the second EBR in the Flyin’ Ryan Oehler trailer. Hall sold that bike to Oehler—or rather, traded it to him—a year or two ago when it was still Buell-bodied. His rides this season are part of the trade deal.

Coming up next on Eatmyink: What’s up with the Vance & Hines V-Twin program? I’ll have more on that very, very soon, so stay tuned!