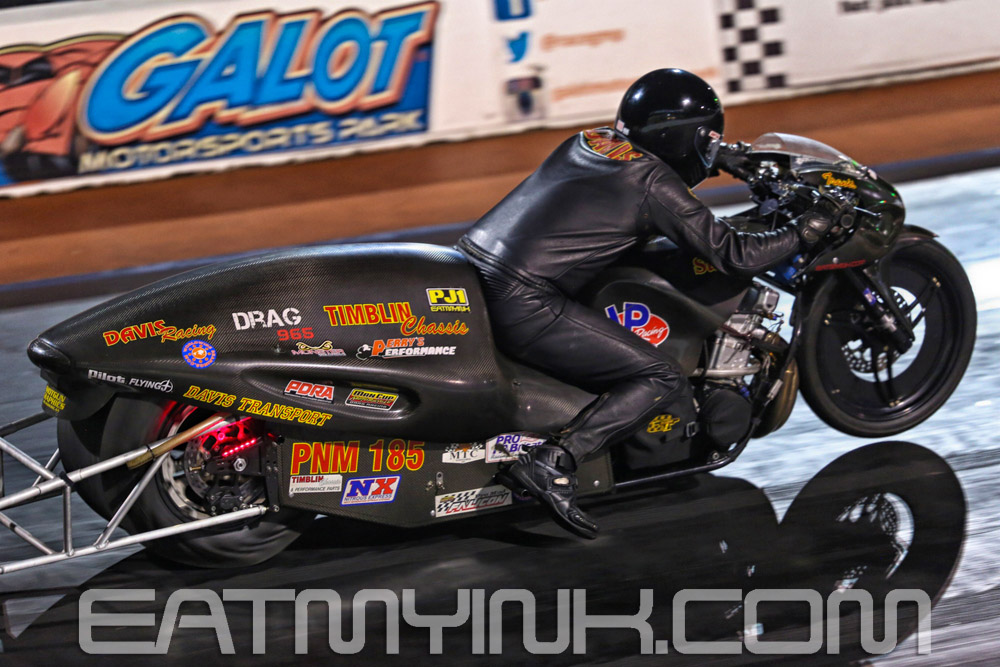 Davis and his family team were dealing with a gremlin in Friday qualifying, but the Alabama rider got his Timblin-built Suzuki figured out for raceday. In the first round, Davis and championship rival Chris Garner-Jones left the starting line with nearly identical reaction times, but Davis pulled away with his 4.069 at 175.09 over Garner-Jones’ 4.084 at 171.49.

Travis was consistent in the semis, laying down a 4.068 at 174.71 while opponent Gerald Smith went red.

A little luck helped, too. Davis ended up seeing the winlight illuminated in his lane when his final-round opponent—number one qualifier Ashley Owens—went red. Davis ran his slowest pass of eliminations, a 4.082 at 172.19, while Owens threw away a 4.051 at 171.95 on his McKinney Motorsports mount. Owens ran a 4.15 at 172.21 to eliminate Terry Wynn in the opening round before firing off a 4.052 at 172.06 on a semifinal single.

With Davis’ win over Garner-Jones in the first round and his third win of the season, he clinched his third PDRA world championship.

“All the competition’s tough,” Davis said. “The guys who haven’t been so fast, they can step up and run a number at any time. Sometimes I get a little relaxed on the tree and I’m behind. I’m just glad everything came together and we won tonight. The bike stayed together and I didn’t have to do anything to it.”

In Owen’s second appearance of the PDRA season, he rode his self-tuned Suzuki to a 4.037 at 176.21 in qualifying.“We hadn’t made as many races this year, so that felt great to qualify No. 1,” Owens said. “It’s kind of a loaner bike so it’s not the bike I normally ride. I appreciate Eric [McKinney] letting me ride it this weekend.

The Jones family team performed well in qualifying also, with rider Richard Gadson qualifying second with his 4.041 at 172.65 and Chris Garner-Jones following in third with a 4.048 at 173.61.

In just his fifth Pro Boost race, Johnny Camp strung together four win lights to earn his first career PDRA victory after six years of trying in Pro Nitrous. Camp, who qualified No. 2 in his Brandon Stroud-tuned, ProCharger-boosted “Hells Bells” ’69 Camaro, ended the day with a 3.693 at 203.16 on a single pass. Opponent James Beadling wasn’t able to start his roots-blown ’69 Camaro for the final round.

“I’d like to first thank Proline and Tatman Electric for everything they do, and our own company, Donaldson Supply and Turnkey Foundations,” Camp said. “Especially Proline and the tuners and the whole package. We’ve been working at it and it’s finally paid off. We won Maple Grove in Northeast Outlaws and we’ve been No. 1 a couple times, No. 2 at Shakedown. We’re really happy with what’s going on. It’s my first year with this combination, first year in this car. I only have 50-some passes on the car. I’m happy with what we’ve accomplished.”

Beadling, who earned his first low qualifier award on Friday, recorded a 3.717 at 200.32 in his roots-blown ’68 Camaro on his earned first-round bye. He defeated Kurt Steding in the other remaining roots-blown car in the second round, going a 3.674 at 201.37 to Steding’s 3.694. Beadling repeated the performance to the thousandth of a second to knock out defending world champion Kevin Rivenbark in the semifinals.

Jim Halsey had a dominant championship season in 2019, but the nitrous Pro Modified veteran was winless in Pro Nitrous competition this season going into DragWars. He needed a major comeback to stay in contention for another world championship, as he was trailing two-time world champion Tommy Franklin by a couple rounds. He made up one of those rounds Saturday night, firing off a 3.632 at 206.61 in his Fulton-powered ’68 Camaro to defeat Franklin and his 3.685 at 204.14 in the final round.

“This is our first win of the year, so it’s tremendous for us,” Halsey said. “We changed a bunch of stuff on the car over the winter. We had some bad luck. Now we’re one round apart. [Franklin]’s one round ahead. I told Eric [Davis, crew chief] last week, all we have to do is qualify No. 1 at the next two races and win both of them. We’re one down, one to go. I think [this win] puts us in the driver’s seat. I’ve never really chased anybody from behind this close, so we’ll see what happens.”

Johnny Pluchino rolled into the weekend with incredible momentum after winning three of the first four races in his Kaase-powered ’13 Mustang. He added yet another victory and padded his points lead over JR Carr by three rounds, effectively securing the 2020 world championship. He left on Elijah Morton in the final round and held the lead with a 4.086 at 176.79 to Morton’s 4.111 at 175.52.

“We won two 632 championships as a stepping stone to get to this,” said Pluchino, who will need to officially clinch the title at the World Finals. “This was where I wanted to be. I dreamt about this for a long time. Pro Stock’s my goal. Mountain Motor Pro Stock is pretty badass. These things are a ton of fun to drive. I have a lot of respect for these competitors out here. I say we’re badass and we’re the ones to beat – and we are – but there are some really good competitors out here, guys who’ve been doing this for a long time. I have a lot of respect for them. But we told them we were coming this year and we did.”

Wes Distefano has had consistency on his side all season, but the Michigan driver was winless in four consecutive final-round appearances. He ended that streak at DragWars, as he took down two-time world champion Dillon Voss in the final round on a holeshot. Distefano’s 4.211 at 170.19 in his Musi-powered $hameless Racing ’68 Camaro held off Voss’ 4.207 at 169.57.

“It’s really great to get the monkey off our back,” Distefano said. “Honestly, my confidence wasn’t there. I was really dreading that fifth runner-up. For us to be able to pull it off on a holeshot, that makes it a little more special as a driver, but I’m just so happy for me and my team. We worked really hard. We worked our tails off. It feels really good.”

A pair of past world champions battled it out for the Elite Top Sportsman win, with 2018 champion Donny “Hollywood” Urban in his Nesbitt-powered ’69 Camaro taking on 2017 champion Dewayne Silance in his Buck-powered ’68 Camaro. Urban was better on both ends of the track, leaving first and running 3.941 on his 3.89 dial-in. Silance broke out, going 3.973 on his 4.00 dial-in.

The Top Sportsman 32 event winner was decided on the starting line in the final round. Ron Whitlock rolled through the stage beam before the tree activated, letting JR Ward run 4.391 on his 4.36 dial on a single pass to win.

Defending Elite Top Dragster world champion Kellan Farmer broke through for his first win of the season in his nitrous-assisted ’20 Race Tech dragster. The Race Tech shop foreman used a slight starting line advantage and a 3.99 on a 3.97 dial-in to defeat Josh Duggins, who ran a 4.243 on a 4.22 dial-in in his ’15 Maddox dragster.

Coolshirt Pro Jr. Dragster finalists Nyckolas Shirkey and Ethan Steding both broke out on the 7.90 dial-in, but it was Shirkey’s 7.882 that won out over Steding’s 7.88. In Gilbert Motorsports Top Jr. Dragster, McKenzee Hogan grabbed a significant holeshot advantage, but broke out on her 9.61 dial-in with a 9.523, allowing Kamryn Love to get the win with a 9.068 on a 9.06 dial-in.

The PDRA will decide its 2020 world champions and close out the season at the Proline Racing Brian Olson Memorial World Finals, Oct. 22-25 at Virginia Motorsports Park in Dinwiddie, Va.