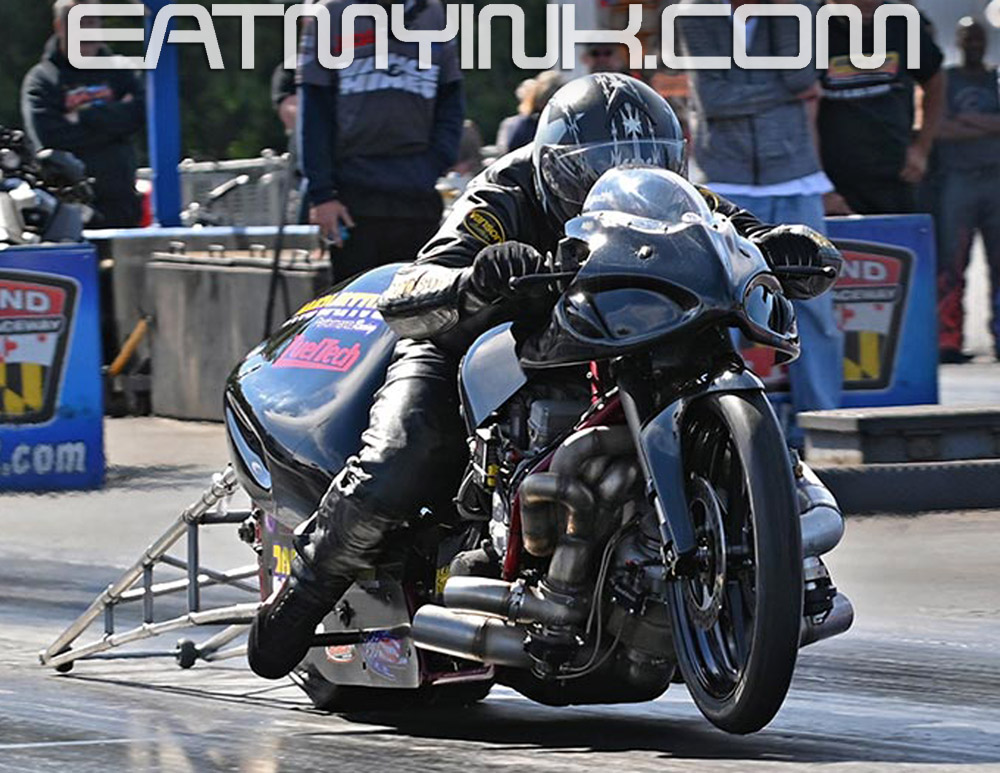 Veteran Ohio motorcycle drag racer Mike Chongris made winning and setting records look easy this past weekend at XDA’s DME Racing Fall Nationals at Maryland International Raceway. It was only the second event for Chongris’ turbocharged Suzuki GS, and only the second time Chongris has raced in the all-out, wheelie bar, eighth mile, Pro Xtreme class.

Chongris was aided remotely over the weekend by FuelTech’s Carlos Daud, joining in the tuning team along with Chongris and Shane Smith to sort out the still-new bike, punch tune-ups into the FT600, and take on intense, record-breaking competition.

“We were hoping to test Thursday,” said Chongris, who had to fit a new, belt-driven fuel pump to the bike just before the event. “But it rained all day. So then we made a few passes on Friday, and went into the 4.0s. We ended up going an .02 in qualifying.” Which placed him sixth in the ultra-quick, nine-bike field.

Chongris’ reaction skills are what got him out of round one of eliminations, with an .009 against defending class champion Kevin Clarke. Number five qualifier Clarke’s 3.92 was stellar, but Chongris’ 4.01 was good enough to convert his starting line advantage to a winlight.

“I got lucky on that one,” said Chongris, who was running career-best numbers despite a nagging problem holding them back from more.

“We were having a boost leak issue. We’re setting it 30 psi, and it’s telling us it’s only seeing 15. And this doesn’t make sense, you know? We changed the sensor thinking, ‘Well, maybe it’s just a sensor and it’s reading wrong.’ Next pass it did the same thing.”

This is where Daud’s expertise and experience—and the FuelTech’s capabilities—really came into play. Looking at the data remotely from Brazil, he could see something that the team on the ground couldn’t. “Luckily, Carlos from FuelTech tells me ‘You’ve got to check right here. This is where I think the pressure leak is.’ And sure enough, I found it was a cracked fitting and changed it for second round.”

And that second round opponent was a tough draw—legendary Billy Vose, who was on a record-breaking tear of his own. Social media went nuts when Vose rode the former Ehren Litten-ridden, turbo Hayabusa to a stunning 3.90 on Saturday.

Number one qualifier Vose opted not to run out his round one bye. In his match with Chongris, Biilly took the tree by .018 but slowed to a 4.01 while Chongris—now with all of his boost making it from turbo to plenum—jumped to a lowest-of-the-round 3.95 and the win.

“So we’re starting to get pumped up, you know? And we’re still working on it, still trying to figure out the clutch. I smoked a clutch every pass, and I mean welded them together.”

“They changed track prep and only dragged the track without spraying first,” Vose reported about the round. “The bike blew the tire away—RPM straight to 13k—so I pedaled and short-shifted, then had to short-shift again. Finally hooked in third, so rolled throttle back open. Once I saw I wasn’t going to catch Mike, I short-shifted out to high gear. I was shocked that as bad I spun that it still ran 4.01.”

Next up for Chongris was the semifinal and multi-series hotshot Shane “Showboat” Eperjesi, who took the tree with an .031 to Chongris’ .055. But Chongris again drove around for the win—this time with a 3.96.

On the other side of the ladder, points leader Travis Davis lost to Rob Garcia in the second round, giving Garcia a chance at the championship. With an earned bye in the semi, Garcia just needed to win one more round—the final against Chongris—to claim the championship.

“I said ‘Well, this is it guys, it’s the last pass,’” said Chongris. And it was—not just of the event, but also the last XDA race of the year. “So we put a little bit more into it. You know, I’m not going nuts and just goin’ crazy. I’m just feeding it a little bit more, you know?”

Chongris’ earlier .95 provided the back-up to place the .93 as the new XDA ET record, and the 190 broke the speed record by 2 mph. “Billy was super excited when I got the ET record and the mile an hour record.”

Chongris’ record-breaking odyssey started when pandemic downtime put his idle hands to work switching the bike from nitrous to a turbo. “My plan originally when I bought this bike was to put a turbo on it and run PDRA. Then as soon as Dan Wagner’s bike went 3.91, I said to my brother ‘Well, screw the turbo idea. We’re going back to nitrous.’”

And sure enough, turbos were soon banned on bikes at PDRA. Chongris decided he wasn’t quite ready for PDRA’s Pro Nitrous Motorcycle field and went Man Cup racing with the bike in 2019. “It’s my first year out, I’m not ready, I’m not gonna go look like a clown, right? We’ll go to all the Man Cups. And I finished second in points.” That was a first-year-on-a-nitrous-bike achievement that Chongris noted has passed completely unnoticed due to Man Cup’s lack of media interaction.

It was in the ’19-’20 offseason that Chongris put the FuelTech ECU and FTSPARK on the bike. “I put the FuelTech on as a nitrous bike. We went in March and tested it and I was super excited because the bike was fast. I get home, start looking everything over and it was tearing up the crank again. And I said ‘I’m done. I’m not spending this kind of money.’ I got two motors. They last three passes and you’re putting all these parts in them, you know?

And with racing on hold for the COVID19 outbreak, they had time to make the swap. Chongris got on the phone but had trouble getting certain parts and pieces, especially a plenum. Everyone wanted to sell him a complete system and install it for him. That didn’t jibe with Chongris’ hands-on worldview.

“So then we teamed up with a guy—Mac at 2 Brothers Fab—and he made me a plenum. Once I had a plenum and an exhaust, I went to Wiseco. We built new pistons. I went to PSI and they built the new valve springs. And I went to work.”

As recently as mid July, when Man Cup ran at nearby Dragway 42, Chongris’ bike was still in pieces.

The long distance relationship between Chongris, Smith and Daud started well before the bike hit the track. “The FuelTech ECU gives us the opportunity of live remote tuning, and we have successfully been using that on all dyno sessions on the bike,” said Daud.

“He just loves racing,” Chongris said about Daud.  “He is die hard and as crazy as I am. Listen to this—him and Shane, three in the morning, we’re dynoing this bike for three days. From nine at night till three in the morning. These guys just kept helping me develop this whole program.”

“This is a very hard working team,” said Daud. “We all work during the day on different jobs, and tuning and building of the bike mostly happens during the night. I´m really glad to be able to help them.”

Chongris then took his bike to his local track’s Wednesday night program. “That’s a real, real sketchy track,” laughed Chongris. “It was all street cars, but we just wanted to make sure it would leave the starting line, because we had no idea. We were like ‘It might bog, it might have turbo-lag.’ We don’t know. It left like a rocket ship.

“We loaded it up from there and went to Virginia. And we did okay in Virginia.”

“Now we had a fuel pump issue. MagnaFuel—who is now one of our sponsors for the bike—we called them up and said ‘Hey, we have this pump and it’s not working,’ and they like, literally, rushed to build me a pump. We overnighted it, and I overnighted all kinds of parts from Timblin to mount a belt drive pump on the bike. I overnighted a new front end from Grothus.

“We finished the bike Tuesday night, loaded it and left for Maryland. So we showed up again untested.”

“At the track, he has been sending me the logs,” said Daud. “I’ll do the mods and send him back the map, which he uploads on the ECU and it is ready to go.

“We have more time on qualifying. However, when it gets to eliminations, they need me to look and log and send them the map ASAP.

“Actually, this weekend I had to drive my daughter back to college in another town here in Brazil. This was exactly when they were running rounds two and four. I took my computer, connect with my phone, and put her to drive while I did my work. I guess it worked! Even she got involved and was extremely happy when we find out we won the race and got the class record!

“This has been a very nice experience for me, tuning a bike. I come from the world of import car drag racing, tuning turbo alcohol four cylinder engines for a long time.”

“Carlos and Shane are the main tuners,” said Chongris. “They helped me with all this mapping, helped me build all this. And now we’re going to the track and they’re helping me with the data even further.

“The bad news is, they’re not at the track to see the bike. So it’s a lot of me trying to relay what’s going on and them looking at data and trying to make guesswork out of it, you know?”

Seemed to work out pretty well.

Tuesday after the event found Chongris taking the motor apart for the first time since putting the bike together some 18 or 20 passes ago.

“We want to double check if all the new stuff we’re doing inside the motor is working.” The bike did have a hurt clutch basket, which was causing their clutch problem.

“There are so many people to thank, if I forget anyone I apologize ahead of time,” said Chongris. “First I have to apologize to Shane and Carlos for all the late nights on the dyno. These guys went way beyond what anyone can imagine, and ‘Thank you’ is nowhere enough for these guys. I also have to thank FuelTech, the president of MagnaFuel Robbie Ward, Ernie Munoz of Comp Turbo, Terry Stemper of Innovative Performance, Mac of Two Brothers Fab, Wiseco Pistons, FBG, Timblin chassis, Grothus Dragbikes, DTM, and all my other aces in the hole. Big thanks to my whole race team that helped all weekend and also my whole family.

“If I told you all the people who helped it would take a month. You’d have to drag the list of names through the sky behind an airplane. Nothing is possible without good people in your life!”

Teasley ran 7.50s every pass on raceday, winning the final over “Super Dave” Stewart and his turbo ‘Busa.

“I love it!” Merced said about the FuelTech. His AM Performance also built the GSXR. “It’s a great system and we keep learning more and more. It’s  tough when the weather is so good like this weekend, the bike make so much power.”

Jeremy’s brother Brandon won the Real Street championship—also with a FuelTech—tuned by Jeremy. Like Davis in Pro Extreme, Brandon lost in second round and had to wait it out and see if his points lead would hold up.