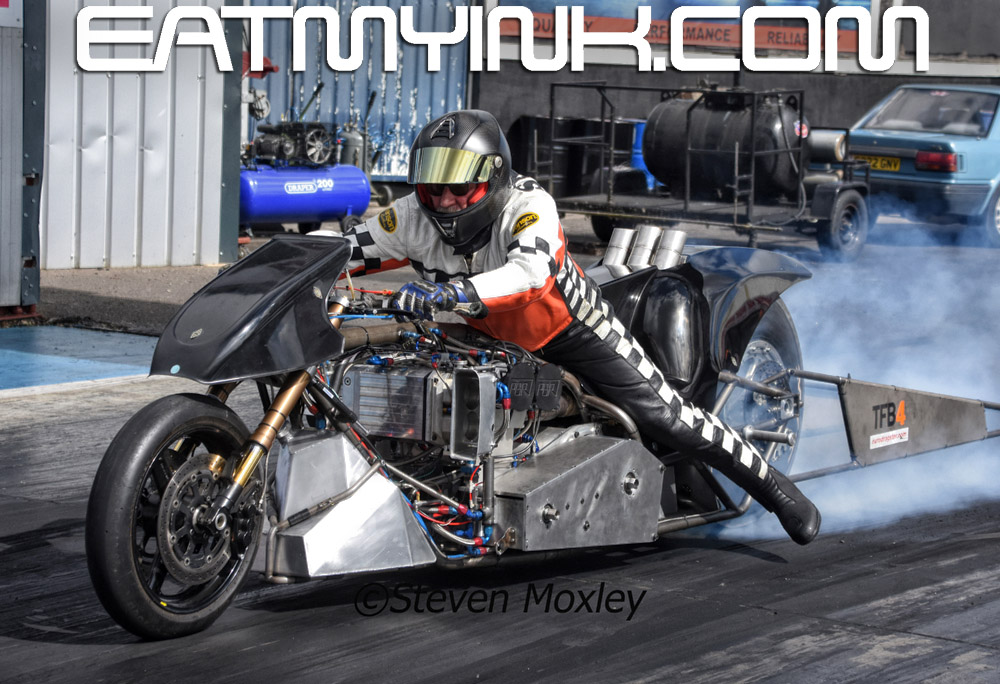 Due to COVID19,  there will not be any ACU and FIM Championships in 2020. But Santa Pod has saved the day and decided to run three races in a club series. This is the Green Light Nationals.

Funnybike riders faced a strong headwind during qualifying on Saturday, but the wind eased a lit on Sunday.

Stuart Crane has a new engine combination and had a soft set-up for this event. He ran 6.912 with a career personnel best of 198.03. The rear tyre was damaged and he had no spare, so was out of the show.

Phil Crossley has various problems during qualifying and ran a best of 7.491-175.08. Reigning ACU Comp Bike Champion Louis Davies has moved up to Funnybike and qualified third 7.523-157.99.

Round one of eliminations and Mark Smith ran a jaw dropping personnel best of 7.173-179.97 against Crossley’s 7.382 to reach his first Funnybike final. Parnell was a no show (broken camshaft), so Davies had a bye to final.

Just before the finals were due to run, rain fell and bought the event to a close. The final was run at the next meeting, where Smith had a solo pass for the win after Davies was shutdown for an oil leak.

Round one of eliminations and Clark had a bye run, but damaged his engine at the finishline (camshaft and valves). Hambridge broke at ¾ track against Leamon, and Burns ran 8.595 to beat Neary 9.660.

Steve Venables wasted a 6.970-208.02 in round one of eliminations when he redlit against Smith, who ran a stunning 7.326 at 196.43. Dance struggled off the start line against Mead, who took the winlight. Hope beat Dainty.

Smith took the win when Hope had a massive wheelie in the rain-delayed final.

Round one of eliminations and Chrichlow ran 8.502 to beat Leo Lester’s breakout 8.497.

Roe won when Howe redlit in the rain-delayed final.

Craig Wright ran a perfect 9.500 for number one 9.50 qualifier, but Martin Hallett ended Wright’s weekend in round one of eliminations. Hallett had a bye run to the final.

On the other side of the ladder, reigning 9.50 Bike champion Richard Sawatzki beat Alan Morrison in the semi to face Hallett in the final

Fuel Bikes were testing at this event. Reigning ACU Top Fuel Bike champion Steve Woollatt put on a show for the small crowd with three arrow straight runs against the headwind, with best figures of 6.490-195.41.

Neil Midgley ran his best on the final pass with 6.541-180.64, just clicking off before the finishline.

Bobby Wallace has bought an ex-Ricky Smith Camaro nitrous Pro Mod and was finding a baseline over the weekend.

Andy Raw was testing his nitro burning VW Beetle Funny Car after a lot of work has being done over the year.