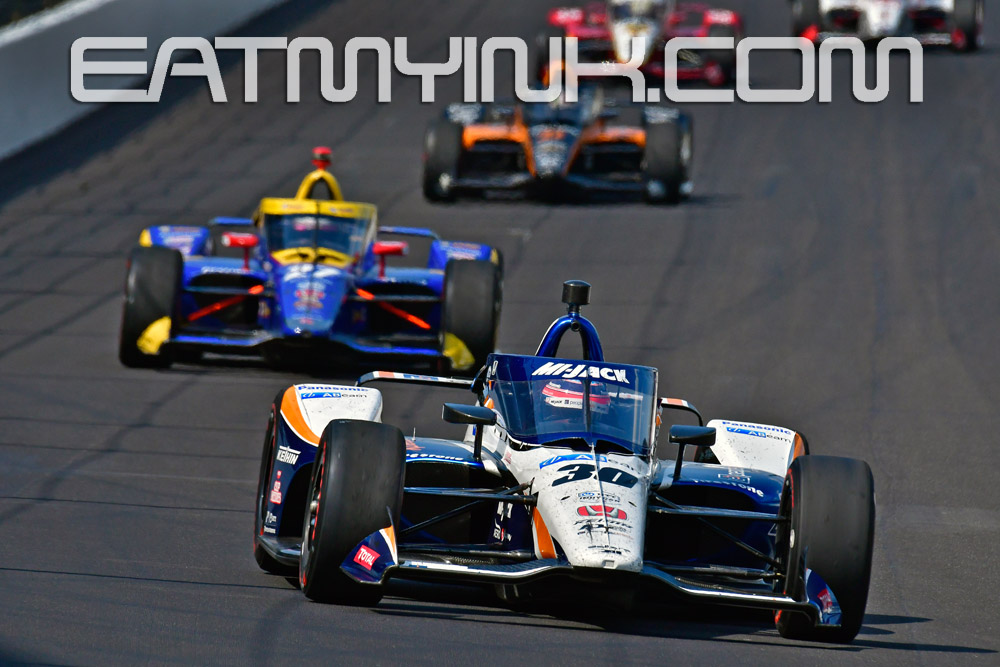 “In all the pre-race talk, few were mentioning Taku (Takuma Sato) as someone to keep an eye on,” Robin Miller wrote on Racer.com

Seriously? How recent winner (knows how it’s done), front row starter (very fast), and drama-free-in-August (smooth Carb Day with all the right things to say afterwards) Sato was “overlooked” is beyond me.

I picked him, put my money where my mouth was, told my readers to do the same (don’t cry to me about your inaction), and collected at 16-1.

And that was despite being “overlooked” when media credentials were dished out for this year’s no-spectator race and not having the benefit of being on the inside of the fence.

My only real concern was his Rahal Letterman Lanigan team. They haven’t shown the crisp strategic and execution edge over the years as Teams Penske and Andretti (who Sato drove with for his 2017 win). When Sato lost a couple of positions on his first pit stop, this concern was heightened.

Middle-of-the-front-row starter Scott Dixon led 111 laps, and he and the Chip Ganassi team were making it look easy. But Sato kept in sight of the lead all day, always right there.

100th500 winner Alex Rossi looked slightly faster than Sato, but then again Alex always “looks” fast—except for the 100th, when being slow is what allowed him to stretch fuel and win.

Now Alex did upset me and my winning plans when he spun out of his pit stall and clobbered my bet Sato. But I think it was a racing incident and he didn’t deserve the “back of the pack” penalty he received.

For the second year in a row, Alex began a banzai run through the field until the apex of turn 2 (a spot I’ve seen him almost lose it before) kicked him into the wall.

Thankfully, the direct hit to his left front in the pits didn’t seem to slow Sato down one bit.

In the final stint, Dixon’s team seemed to make a strategy call to hang back in second and let Sato (who pitted one lap sooner than Dixon) lead, burn fuel, and either A) run out, or B) succumb to Dixon and his team’s feeling that their combination was superior.

“The fuel strategy was a bit tight,” agreed Sato.

Dixon made one run on Sato, who deftly drifted out and stopped the 2008 winner’s progress. “I saw Scott was coming right through out of Turn 4, and he was screaming, coming at me. And I just held him off.”

But the race had other plans than Dixon’s. Spencer Pigot destroyed the pit wall attenuator in a violent crash with four laps to go.

With a key safety component of the track now needing a total rebuild, all thoughts of a red flag followed by a shootout were kabashed.

The Old Forester Prohibition Style I was fetching to calm my nerves for a green-white-checker instantly turned into a celebratory quaff.

And shame on all the odds-makers and media wags who ignored what was smiling and radiating confidence right in their faces.

“This is a hard one to swallow,” Dixon said immediately after the race. “On fuel mileage, I really can’t see how Sato was going to make it. We pitted a lap later, and the numbers they had to get, it was going to be very difficult. I thought they were going to throw a red flag, which would have been interesting for the last four or five laps.”

“I think we had the best car,” said Sato. “Only we were a lap short from Dixie in terms of the fuel strategy, and I couldn’t use max power to switch back and forth.”

“It was good day for Honda (Honda swept the top 4 and took 8 out of the top 10). I want to give a massive ‘thank you’ to them. We’re very proud to be powered by HPD and Honda.

“It’s nice to get some points. But it’s hard when it slips away like that.”

Sato continued an impressive run of recent success in the 500 with three top-three finishes and two wins in the last four years.

“This is unbelievable,” said Sato. “Everyone did a hell of a job. HPD and Honda gave us a lot of power and a lot of fuel mileage.”

Congratulations on your second Indy 500 win Takuma, you did exactly what I and my PayPal account thought you would!

Results Sunday of the 104th Indianapolis 500 presented by Gainbridge NTT INDYCAR SERIES event on the 2.5-mile Indianapolis Motor Speedway, with order of finish, starting position in parentheses, driver, engine, laps completed and reason out (if any):

story by Tim Hailey, quotes, stats and photos by IMS